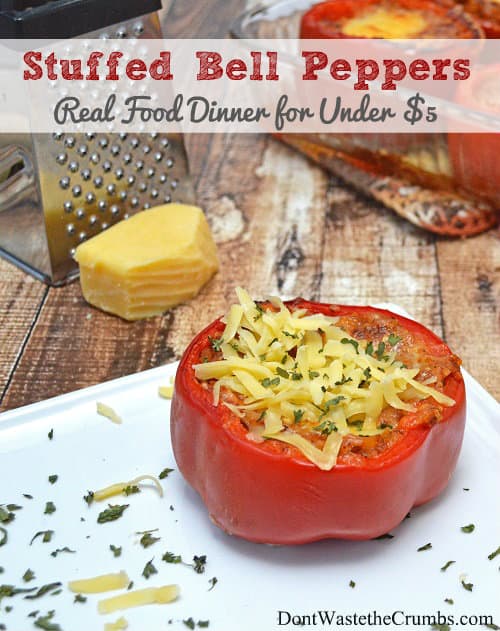 My mom used to make stuffed peppers for dinner when I was a kid.  They were green, stuffed with ground beef and simmered alongside huge meatballs in a huge pot of red pasta sauce for several hours.

I wasn’t a huge fan of them as a child, mostly because of the bell pepper part.  I usually opted for a meatball instead, chopping it up over a bed of rice and smothering it with extra pasta sauce.

As an adult though, I’ve grown to enjoy bell peppers and missed the comfort of them being stuffed and served with homemade sauce.

Wouldn’t you know, the first time I tried to replicate her recipe was a complete and utter disaster.  The stuffing came out of my peppers, my meatballs never cooked through and I had no clue how to even begin to eat this monstrous pot of seemingly random mixed up food.

Not too long after we got married, I proposed the idea of stuffed peppers to Mr. Crumbs.  He’s not a big fan of ground meat, so stuffing them with ground beef was clearly out of the question.  But not wanting to disappoint his eager-to-please-new-wife, he asked if I could do it with chicken instead.

Hmm… I guess I could do that.  They wouldn’t be the same, but that doesn’t mean they would be bad.

It’s now nearly eight years later and the tradition of stuffed peppers has officially been passed on.  Granted, my method is different, and my stuffing is different, but the deliciousness and comfort that comes from a hot homemade meal is still the same.

When you’re picking out peppers for this meal, try to get the biggest peppers possible so you can buy fewer and split them in half to stuff instead.  If you can only find smaller peppers, allow one full pepper per person, possibly two for teenagers and dads.  In either case, aim for peppers that are 75¢ or less to keep this meal frugal.

This meal is PERFECT for making ahead and freezing.  See the specific instructions below if you happen to stumble across a plethora of bell peppers and you’re not sure what to do with them. 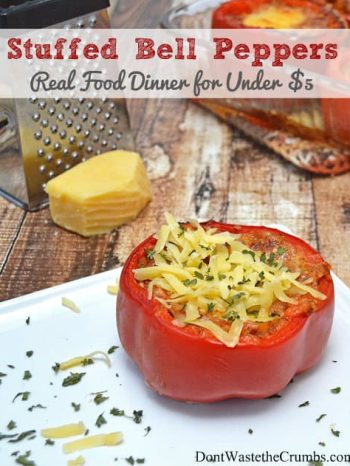 Try out these Stuffed Peppers, a classic at the dinner table now made healthier and more affordable – a Real Food Dinner for Under $5.

Additional Thoughts/Comments on This Recipe

Make it a Freezer Meal

Bell peppers lose their crunch once they’re thawed from a frozen state, so this eliminates the need to boil the peppers before stuffing.  Skip that step and follow the directions through the filling.  Then, double wrap each pepper in plastic wrap individually and freeze upright on a cookie sheet. When they’re frozen through, place them in a labeled ziploc bag. To serve dinner:

Now through May 31, 2014, Jovial Foods is offering 10% off your entire order, PLUS free shipping!  Use coupon code DONTWASTECRUMBS to save on BPA-free tomatoes, true Italian olive oil, gluten-free pasta and ancient whole gain einkorn wheat.  Click HERE to browse their store!

What’s your favorite meal from childhood that you’re now making for your own family?  Is it the same recipe?  Have you made it healthier?

Disclaimer:  This post contains affiliate links.  By making a purchase through those links, you support the ministry of Crumbs without any additional cost to you. Thank you for supporting Crumbs in this way!  Read my full disclosure statement here. 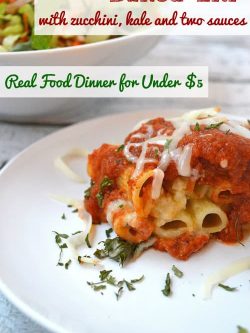 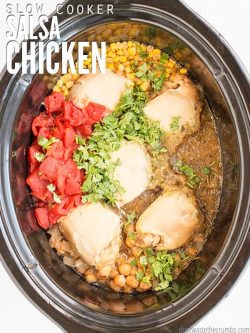 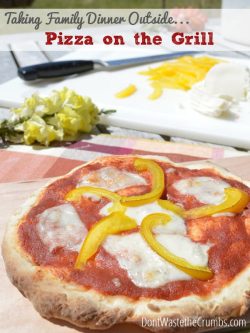 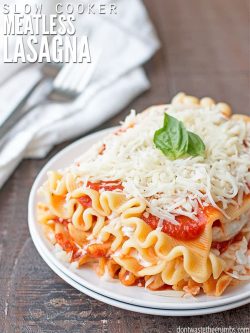