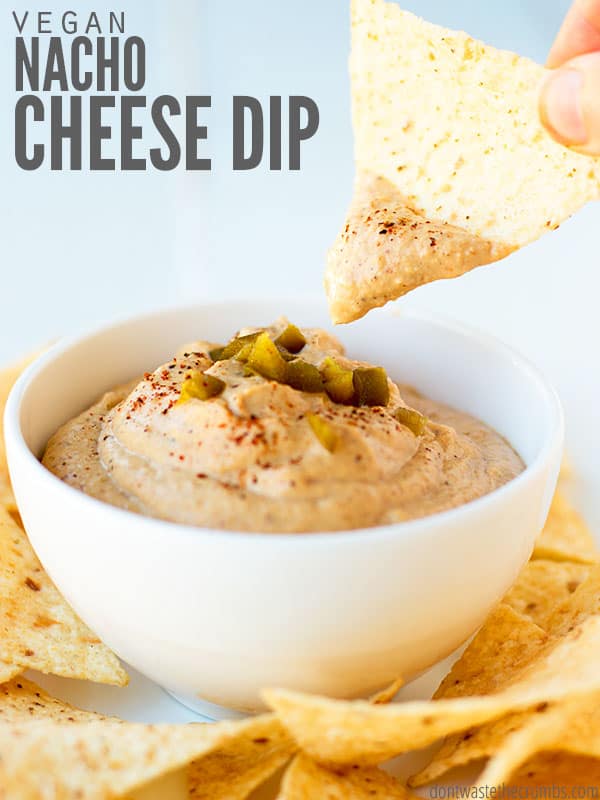 I like to think that all of my recipes are pretty stinkin’ good, but every now and then I make something and REALLY hit it out of the park. Here’s how I know it’s awesome:

I eat the whole thing, by myself.

It happened with healthy peanut butter oatmeal cookies and with homemade cheez-it’s and it would have happened with chocolate avocado mousse if they weren’t already portioned into 8 oz cute little glass jars. (THANK GOODNESS for those jars!)

Well friends, it happened again. This time, with this vegan nacho cheese sauce recipe. And I’m NOT sorry!

Before you say it – I KNOW.

I’m not vegan, have never tried to be vegan and the mere idea that there’s such a thing as VEGAN CHEESE kind of creeps me out.

And apparently you can take cashews and turn them into nacho cheese sauce. 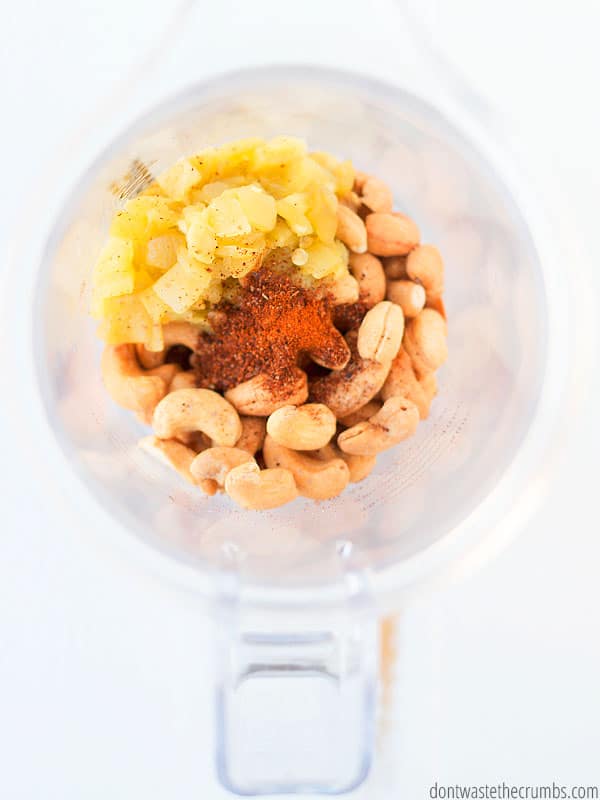 That means you have ONE MINUTE to tell yourself that it’s perfectly okay to have a bite or two… or three… but that you will not, UNDER ANY CIRCUMSTANCES, eat the entire batch of vegan nacho cheese sauce.

And I’ll tell you this. One minute isn’t NEARLY long enough.

Just give in. There’s no point in fighting it.

And it DEFINITELY beats that fake wanna-be cheese a.k.a. Velveeta. 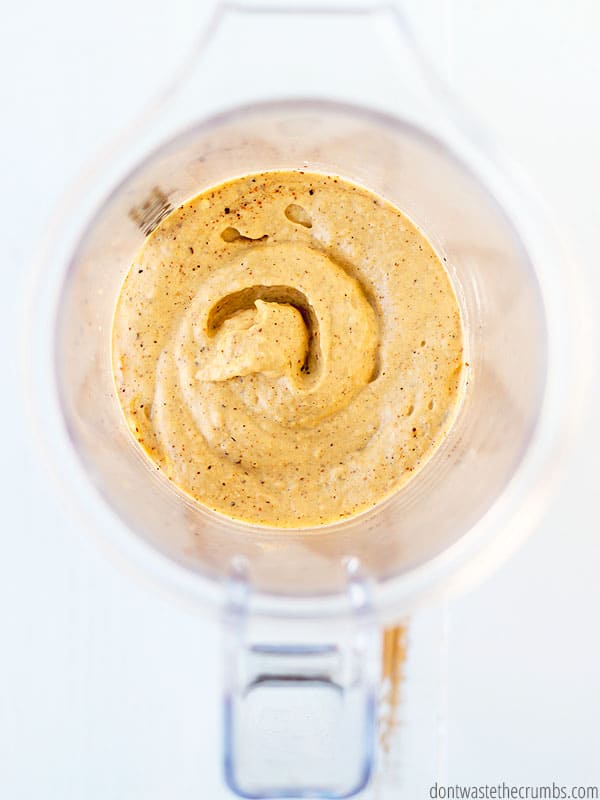 If you’re not vegan (like me) and you’re wondering why in the world you should try making this vegan nacho cheese sauce recipe (like me), then let me clue you in: 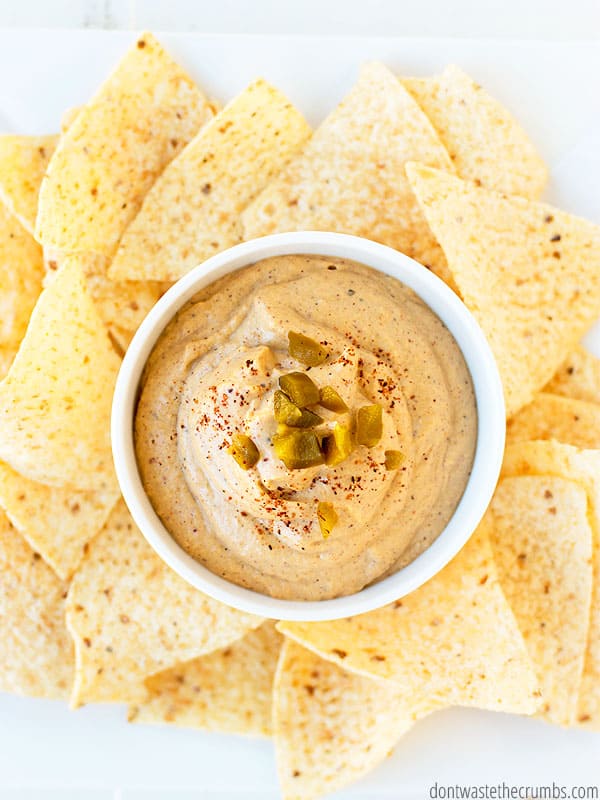 Even if you don’t have the need to make a vegan nacho cheese sauce recipe, here’s what I’m thinking.

I’m thinking that one day, you’re going to be invited to a party and the host(ess) is going to ask you to bring something.

To which you say, “Sure! I’d love to!” and then promptly panic because

Thaaat’s when you make this vegan nacho cheese sauce recipe (and pick up a bag of chips on the way over).

Or maybe you’re watching the Superbowl or the Stanley Cup or the World Series or the NBA Championship and you’re thinking that you need some party food to go with the game.

This is real life folks. You know you’re going to need this recipe. I suggest making a “trial batch” this week, just to make sure that there’s enough for you AND everyone else.

A few notes about this recipe…

I used salted cashews because that’s what I had on hand. If you use unsalted OR your taco seasoning is unsalted, add a pinch or two at the end to taste.

I have this Blendtec blender and it’s pretty awesome. It makes this vegan nacho cheese dip so incredibly smooth without having to soak the cashews. If you have a regular blender, you should be okay – you just might have to run the blender a few times. If you have a regular blender and you know for a fact that it absolutely will not turn raw cashews into a creamy dip on its own, then soak the cashews overnight. (I’ve included instructions in the recipe below).

As written, this recipe has enough heat to make you go, “Ooh, that’s got some kick to it… I like it!” If you want it hotter, you can add more cayenne OR use hot green chilies instead of medium. 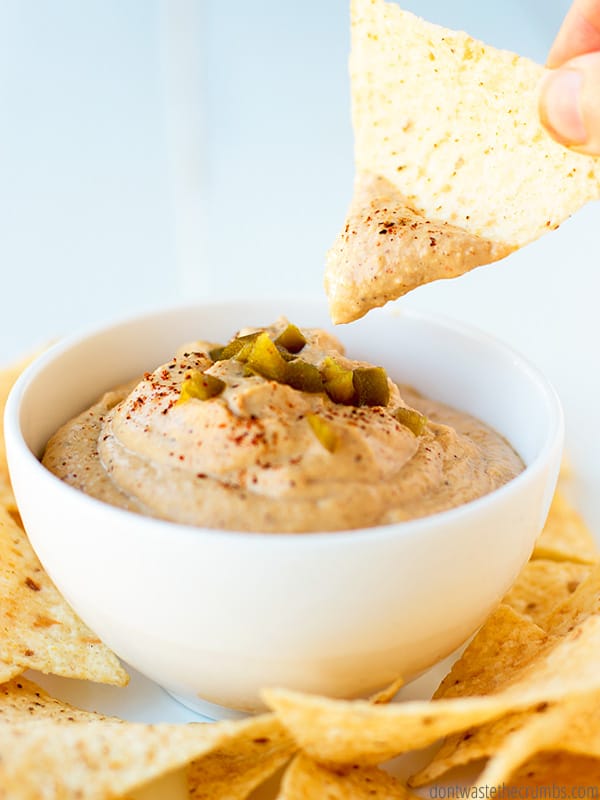 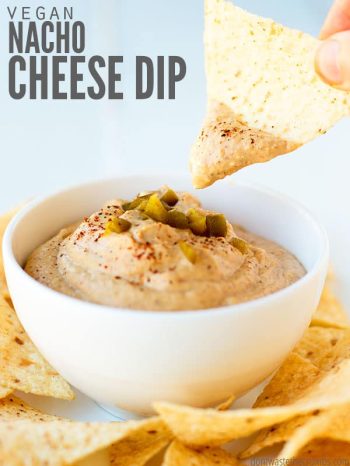 This spicy nacho cheese sauce recipe is SO GOOD! No crockpot, no flour, no velveeta or shredded cheese. Gluten-free, dairy-free & made in a blender!

To soak cashews overnight, measure cashews into a glass jar and fill with enough water so that the cashews are completely submerged. Let it sit overnight. In the morning, drain the excess water from the jar. You may or may not need the 2 Tbsp of water in the recipe, so I suggest trying to blend everything else first, and only adding the water if it’s necessary.

Adapted from Pinch of Yum.

Nuts in general can be kind of pricey. I utilize my Price Book to make sure I’m getting the best price on cashews. Like I teach in Grocery Budget Bootcamp, I watch for the sale cycle to hit a rock bottom price, then I stock up and freeze until I need them! (Although they do go fast when I make vegan nacho cheese dip or chocolate chip cookie dough hummus!)

If you like to buy online, Thrive Market (Crumbs readers get 25% off + Free 30 Day trial membership), Vitacost, and Amazon Prime Pantry are great options!

Where do you stand with cashews being used as cheese? Yay or nay? (Am I the only one who thinks (thought?) it was weird? I’d love to hear your thoughts in comments section below! 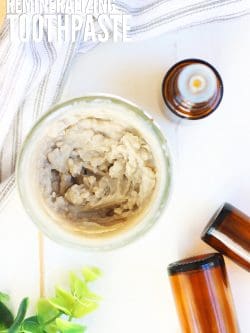 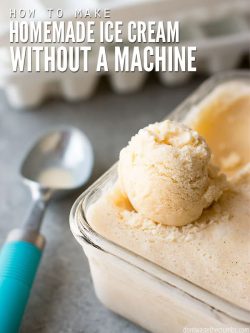 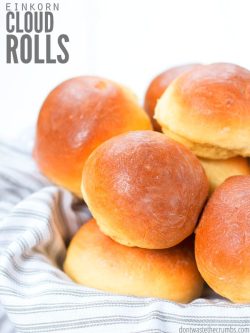 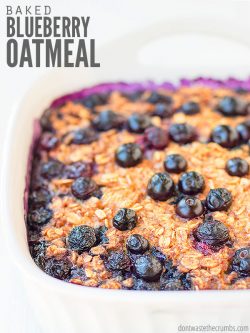