Navigation
You are here: Don't Waste The Crumbs » Real Food 101 » The 80/20 Rule, the Impending Bombardment of Sugar and Teaching Kids About Sweets in Moderation 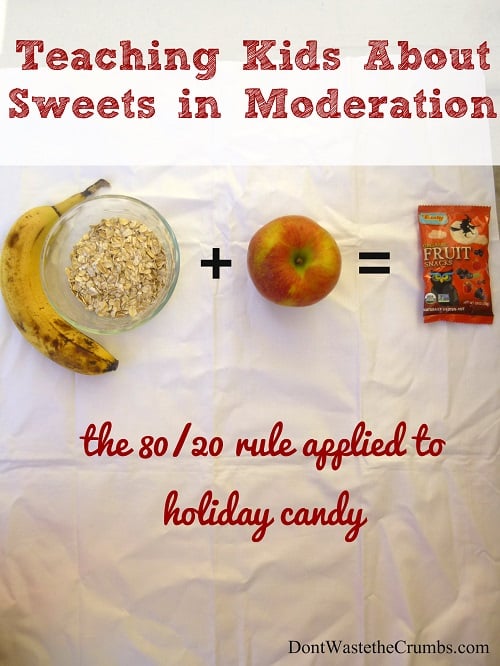 From a real foodie perspective, which holiday is worse:  Valentine’s Day or Halloween?

I’m guessing your answer depends on your current season of life.  I know mine does.

Right now my kids are 6 and 4.  When Valentine’s Day rolls around, they’ll be consumed with homemade cards for Mommy and Daddy, making heart-shaped sugar cookies with Grandma and celebrating Grandpa’s birthday (which happens to be on the 14th as well).  Boxes of chocolate and those little candy hearts with “you’re sweet” or “be mine” are no where on the radar.  And that’s a-okay in my book.

Halloween however, is a completely different ballgame.  Tied with crazy hair night, Trunk-or-Treat is their favorite night of AWANA.  The mere sighting of a ghost or pumpkin at the grocery store and they immediately think about their costumes and candy.

Halloween candy wasn’t always so bad.  When my oldest was 3, we chose one piece of candy for him (ruling out gum, jawbreakers, chewy/sticky and pure sugar items) and set aside the rest.  We eventually forgot about it and ended up donating it for filling Easter eggs the following Spring.  He enjoyed his piece, never thought to ask for more and we never offered.  He was blissfully ignorant towards the sweet stuff.

The year he was 4 and my youngest was 2, we again chose one piece for each of them and then quickly put the candy bucket in a cabinet above the kitchen sink when they weren’t looking.  On the off-chance either of them remembered they had candy somewhere around the house, we allowed them to have one piece (pulling it out of the cabinet when they weren’t looking).  “Out of sight, out of mind” was the goal and roughly two weeks later, they had forgotten all about their pumpkin buckets.  And so did I.  More donations for Easter!

This year though, they caught on.

The day after their buckets were filled, they begged for candy.  They liked to dump it all out, count the pieces and them put them back in.  These candy buckets became a toy, a way of life, and hiding them simple wasn’t possible.  They’d know!  The bucket wouldn’t be where they left it and they’d turn to me wondering where it went.  I can’t lie to my kids, so I’d have to show them it was in the cabinet above the kitchen sink… and then they’d know my candy hiding spot and I’d be doomed forever.

How to Enjoy Sweets in Moderation


So after a couple days of experimenting with how far I could postpone the inevitable “piece of candy” request, I came up with plan B:  The kids can have ONE piece of candy after they eat ALL of their breakfast AND a whole piece of fruit as a snack.

Here’s what I figured.  If the average breakfast was a 1/2 cup of oatmeal with 1/2 a fruit (apple or bananas usually), and then they had a whole second piece of fruit as a snack, that was a lot of real, healthy food for their little bodies to have before 9am.  At best, their bellies would be too full for candy.  At worst, they’d eat one piece of sugar.

I must have still been delirious from Allume to think the best case scenario would ever play out, but the worst case wasn’t actually that bad.  Dare I say it was nice?  They can enjoy their treats without them taking the place of the healthy foods in their diet.  Mommy didn’t have to say “no” all the time and they end up eating MORE real foods in the long run.  Not too shabby, eh?

Mommy has quite a bit of control in this situation too.  My son doesn’t like white creamy foods (yogurt, whipped cream, sour cream, etc.) but he’ll eat it if that’s what’s for breakfast and he knows he has to finish it ALL before he can have a piece of candy.  The Girl doesn’t like eggs, so guess what we’ve been eating a bit more often than usual… 😉

Making them eat a whole piece of fruit as a snack has even deterred them from having candy altogether on a few occasions.  They’d take a REALLY long time to eat the apple or banana and then we’d have to leave for errands or story-time at the library.  Once we left the house, they forgot about the candy.  We might have run more errands than necessary lately… just sayin’.

It wasn’t until I took that picture above that I realized my impromptu, experimental rule was fairly accurate to our goal of eating really well 80% of the time and not worrying so much the other 20%.  Out of the six servings of food in that picture (1/2 cup oatmeal, 1/2 banana, 1/2 banana, 1/2 apple, 1/2 apple are servings according to this site, plus one piece of candy), the candy accounts for 17%.

Doing the math made me feel better about my kids having one piece of candy.  While no candy is ideal, one piece isn’t the end of the world.  And they’re eating wholesome, nourishing foods too.  They’re lunches and dinners are packed with nutrition, so if I really cared to do the math for an entire whole day, that percentage would likely diminished to a very low 5% or 3%.  That, my friends, is award-worthy!

Halloween is just the beginning of what I like to consider a 3-month bombardment of holiday candy.  When these treats are gone, another cookie, or cupcake, or pie something else made up of sugar would take its place.  As much as we’d like to, we can’t lock ourselves up in a closet until the caramels and chocolates disappear.  If it’s not this holiday, it’ll be the next one.  And even though we can keep them out of our house, we can’t stop them from showing up in candy dishes across town.

So what do we do?  We create rules, set limits and let the kids know why they can’t have lots of candy.  Never underestimate their level of understanding.  At 4 years old, my once-addicted-to-sugar daughter now second guesses cakes and cookies because she knows they have sugar.  My 6 year old knows why we don’t buy the junk at the checkout isles of the grocery stores (“they have a lot of bad sugar”).  They’ve both stopped asking for those candies and know that holiday candy is a BIG treat.

Simple Tricks to Keep the Sweets Under Control


Not sure where to begin?  Here are some tips about limiting candy that I’ve learned over the past few years that might be helpful.  Take one or all or or change them so that they suit your family better!

Do you have any tips for keeping the holiday barrage of sweets under control?