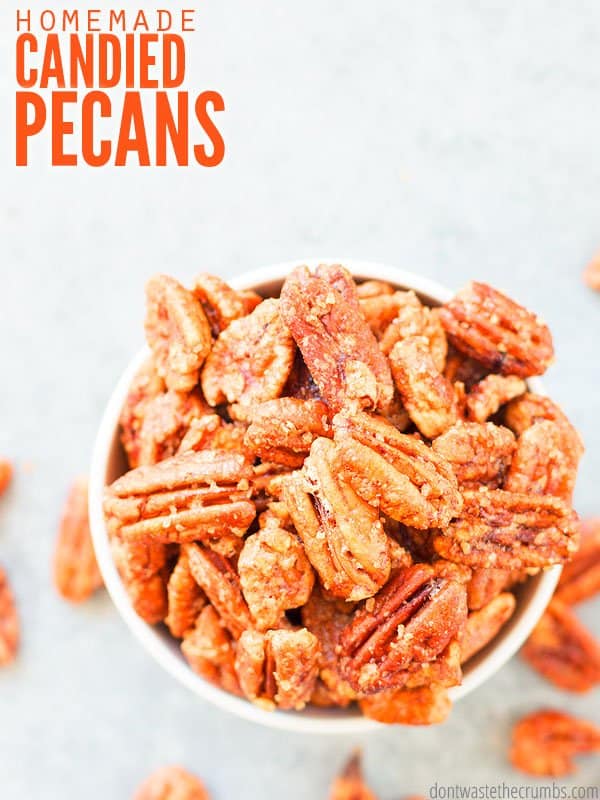 One summer I bought a container of candied pecans at Costco. They were so good, and so addicting, that I ate the entire two pounds of nuts in 3 days.

We’re hosting a Christmas party soon, and I wanted to come up with a snack that was not only healthier than the standard bag of potato chips, but something that was also holiday-ish and would totally steal the show.

The fact that you can make candied pecans at home is new to ME, but apparently they’ve been around for quite awhile.

There are recipes floating around out there that make them super sweet, super salty, super spicy and they’re all super good. Some of these may even be old, tattered recipes handed down from our grandmother’s grandma.

But they all seem to have a common theme – A LOT of sugar. 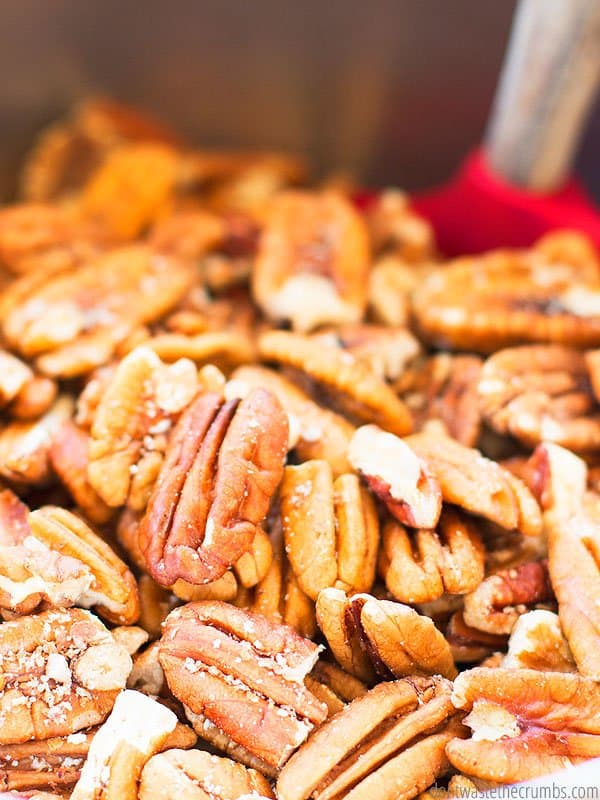 Although we’re hosting a party, I don’t want to cave on my real food goals:

It’s taken us several years to get to this point and these goals are important to me.

I don’t want to throw them all out the window for the sake of a party, and honestly, I want guests who come over to enjoy eating the whole foods we prepare.

Our house may be the first time they’ve experienced the goodness of food cooked from scratch. Maybe they’ve never had snacks that don’t come from a box or meals that don’t require a microwave.

At the same time, I don’t want to feed everyone carrot sticks and peanut butter and call it a meal.

That means coming up with healthier options to traditional foods we’ve had over the years, including a healthier version of candied pecans. 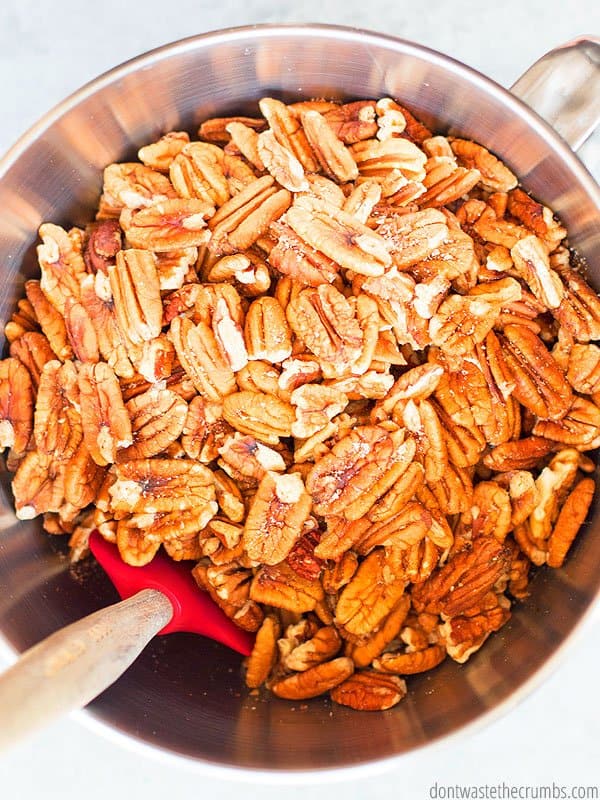 The deliciousness in candied pecans really comes from the sugar. But I think it’s fair to say that anything coated in sugar tastes good, right?

My main goal being to REDUCE the sugar, but I don’t want to sacrifice flavor at the same time. That means we have to be kind of sneaky with other ingredients to make sure we don’t lose any of the awesomeness we’ve come to know and love from candied pecans:

The pecans need to be coated with a liquid in order for the sugar to stick, and most recipe call for egg whites and water.

The egg whites are needed – there’s no way around that. They’re a binding agent and without them, you won’t get candied pecans. You’ll get toasted pecans sitting on pile of toasted sugar.

Or you’ll have to use A LOT of sugar to get some of it to stick. Which doesn’t help our cause any.

So we’re keeping the egg whites, and instead of using water, we’re using vanilla extract. (I recommend making your own homemade vanilla extract to save money!).

I’m also adding a smidge of blackstrap molasses. This increases the depth of flavor, and hits the “sweet” spot of our taste buds in a different way. By adding molasses (one of the least sweet sweeteners), we’re tricking our brains into thinking we’re eating something that’s sweeter than it actually is. 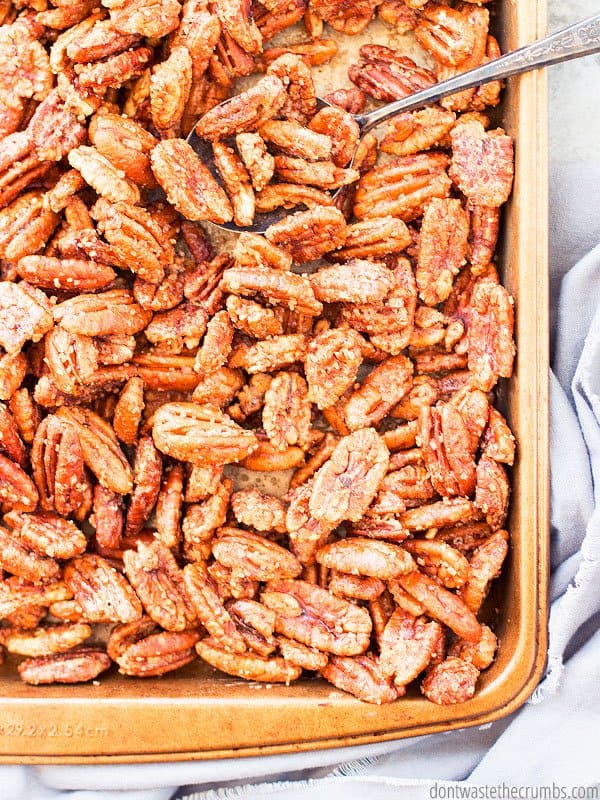 Salt is key to bringing out the flavor in almost any dish, and sweet dishes are no exception.

However, I’ve kept the salt to a minimum in my recipe. Some versions call for up to 5 times the amount of salt that I use, and that’s certainly something to experiment with if you specifically want sweet AND salty candied pecans. I want classic candied pecans, so I kept the salt low.

That being said, a nice sprinkling of THIS sea salt will do the trick to give these pecans a touch of salty without overdoing it (I buy my sea salt from Ava Jane’s Kitchen because it doesn’t contain microplastics, and you can get a bag for just a penny by following this link!!).

Another trick to thinking something is sweeter than it actually is, is using cinnamon. It might seem like there’s a good bit of cinnamon when you compare it to the salt, but I assure you that these nuts don’t taste like cinnamon at all.

If you want a spicy nut, you can add chili powder or cayenne pepper. Chili powder will give more of a savory flavor, and I’d even toss in a sprinkle of cumin too if you go that route.

For the true spice fanatics, cayenne pepper will be your best bet. Remember to start small and add more if you’d like – you can’t take the pepper out once it’s in! 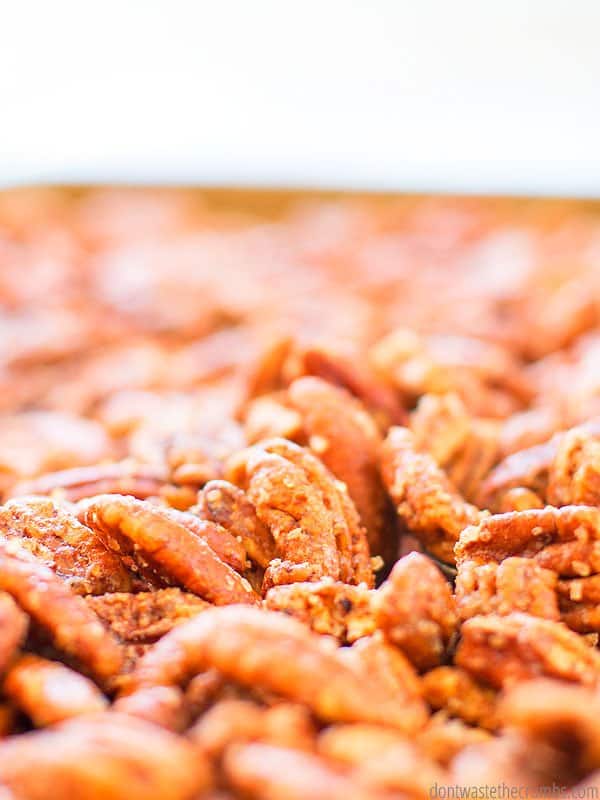 No candied pecan is complete without sugar, but I’ve drastically reduced the amount of sugar in this recipe AND I’m not using white sugar either.

We have intentionally reduced our consumption of white sugar over the past few years, and this year I made the commitment to officially switch to Turbinado sugar.

Turbinado sugar is an excellent substitution for white sugar because it isn’t super dark in color. It’s also less processed and still retains some of the natural molasses, making it a slightly better option than white sugar.

Also, the granules of Turbinado sugar are larger and take up more space in a measuring cup. Typically you’d have to use more Turbinado sugar to achieve the same level of sweetness (like you would when substituting large granules of Kosher salt versus small granules of table salt), but I didn’t do that in this recipe.

In the end, it means getting an amazing candied pecan without a ton of sugar.

And if you happen to use white sugar in this recipe, I recommend reducing the amount to just ½ cup! 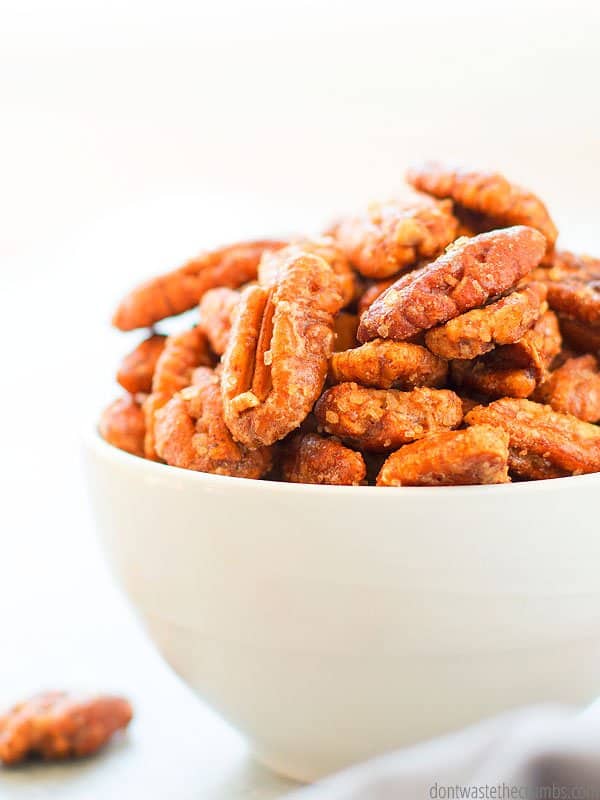 Traditionally speaking, candied pecans uses only pecans (obviously), but you can really use any nut you want. Almonds are the most affordable, but cashews or macadamia nuts would be good too. Or save all the remnants of nuts you serve over the holidays and make one big batch of mixed candied nuts!

My family (and husband especially) went nuts over the pecans, so that’s what I decided to share with you. Fortunately, the recipe is easy to double and triple.

I hope you and your guests enjoy these as much as we do! 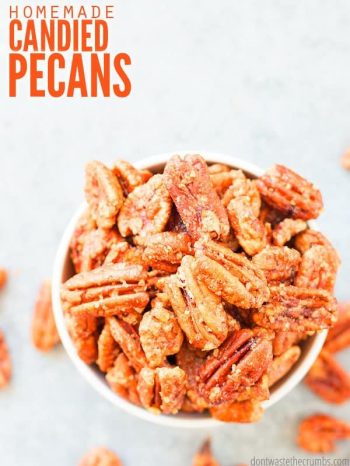 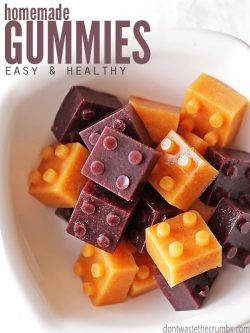 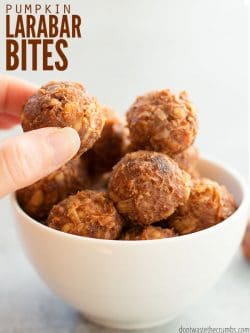 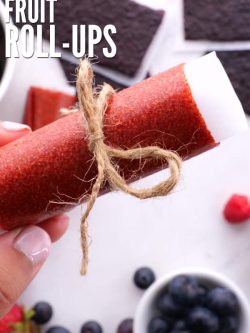 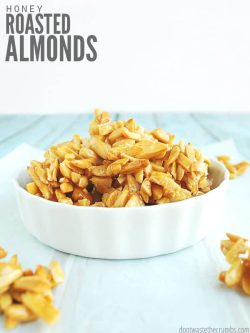