My grocery budget is $330 each month, including food, household items and toiletries. Each week I crunch the numbers to see where I stand. Today marks the end of the month. You can read about the halfway point here, where I spent the first $184 of my budget.

We haven’t had a formal meal plan for two weeks now.

A travesty, I know.

But when “The Sick” hits your house and all your energy is funneled into getting out of bed in the morning, meal planning kinda takes a back seat.

My budget was way under going in to these last two weeks.  Still, I tried to shop smart and think ahead 2-3 days at a time.  We kept mostly to what we already had on hand, supplementing the produce of course and a few other items to make food less mundane.  Here’s how the month panned out! 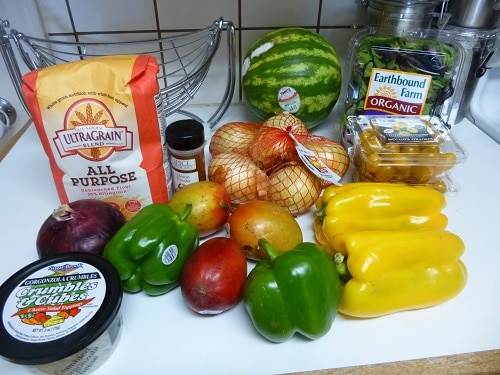 There was no plan for any of the four bell peppers, other than to eat them in some way.  One yellow made its way into a couple salads and one green was chopped for a night of roasted chicken with vegetables.  There’s still one yellow and one green in the fridge that I need to do something with ASAP otherwise they’ll be too gross to eat.

Gorgonzola, yellow tomatoes and the red onion were also for salads.  There’s a recipe on the bag of kale we get from Costco that is really good.  I added some of this and that of what was in the fridge and pantry too.  Tip:  If you make that salad, double the lemon juice in the dressing and don’t skip out on the bacon!

One of the two bags of flour I bought earlier in the month is gone already, consumed by the ever-eating sourdough starter.  This was the best price I’ve seen on flour lately so I bought another bag for the pantry.  Mangos for snacking and smoothies, onion powder and baking powder are pantry staples and salad greens because I didn’t feel like going to Costco (yet) for lettuce.  Yellow onions for dinners and such, also because I didn’t want to drive to Costco. 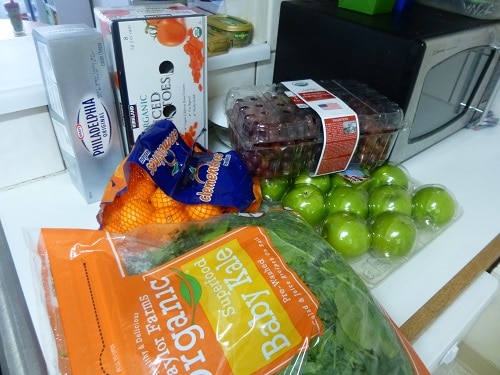 The trip to Grocery Outlet gave me an extra five day lead time on a Costco trip, which I thought was nice.  Mineral water for Mr. Crumbs, cream cheese for a bar variation on this fun cheesecake and diced tomatoes to replenish the pantry.  That recipe calls for a sour cream layer too, but I skipped it so I could save the $5.

Apples, grapes and clementines for snacking and smoothies.  I bought some boxer shorts for Mr. Crumbs too, but they’re not listed because they come out of a different budget. 🙂 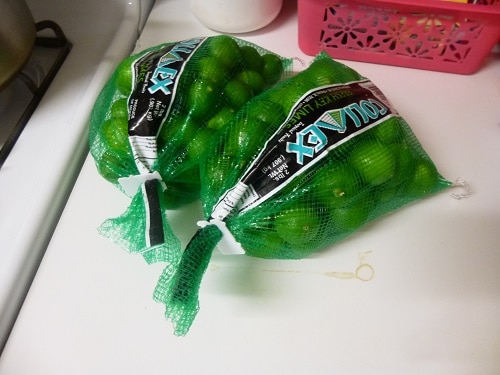 I didn’t need four pounds of key limes, but I have a feeling they’re not going to be available much longer so I tossed in an extra bag.  Mr. Crumbs and I will working together soon, zesting and squeezing and freezing the tart goodness so we can make pies long after the season has ended.

Believe it or not, this trip was SOLELY for basil.  And I swear I took a picture, but now it’s not on the camera…

I have a pattern when I go to this store… I first stroll through the produce, seeking out white bags filled with marked down produce.  Then I scan the discounted meat area for packages of our local farm that practices sustainability.  Next up is bacon, because you never know if you’ll hit the jackpot on marked down nitrate free bacon.

This day I took a different route, wanting to browse the flours.  Boy am I glad I did!  All sorts of varieties of Bob’s Red Mill flours were being closed out.  I picked up two bags of rye and buckwheat flour.  We used rye to originally start the sourdough starter, but I’m thinking about a half wheat half rye loaf of bread.  At $1.67 per package, I’d be nuts to pass it up (remember that it’s $2.71 each on Amazon).

Nourishing Traditions has a few recipes calling for buckwheat, so I’ve been wanting to try that one too.  I didn’t know the price on Amazon at the time (turns out it’s $3.48 per 22oz package), but $1.97 seemed like a good deal.  Buckwheat is gluten-free too, in case I decide to give up wheat or experiment more with gluten-free recipes.

The best find would be the 5lbs bags of organic hard red wheat.  This is a great price for hard red wheat flour, but an amazing price for organic.  I snatched up three bags, trying not to be stingy and leaving some for others. 😉

Whole milk for kefir and yogurt, basil for pizza sauce and all-natural and nitrate free hot dogs as a treat.  I haven’t had this brand before, but Adrienne made mention of them a few weeks ago so I’m trusting her that they’re palatable! 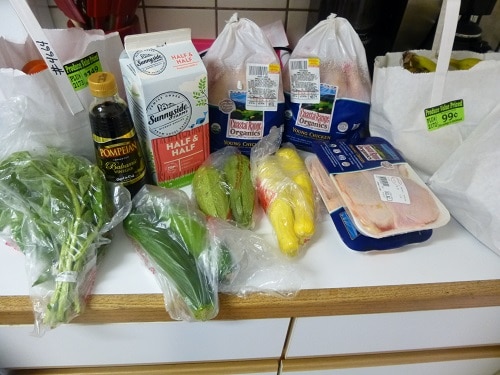 Like the last Savemart trip, this one was really only for squash… but I knew there was some wiggle room in the budget and I wanted to use it up on a good sale that Savemart was running on chicken – only $1.99/lb!  This is better than Costco’s price on whole chickens and better than anyone’s price on just thighs.

We have family coming in town next week and as a thank-you to our parents, we’re cooking up whole chickens on the rotisserie during the visit.  The sale couldn’t have been timed better!  I bought two – all that they had on their shelf – of the whole chickens, and two packages of just thighs.  I’ll pick up another two whole chickens before sale is up too.

While at the store, I found marked down bananas and tomatoes.  The bananas will be for snacking and smoothies.  I originally thought the tomatoes would be for a caprese salad (hence the balsamic vinegar), but I used some for summer squash pasta instead of canned tomatoes.  They were way better too!

The remaining tomatoes WILL be for a caprese salad and the half and half is for coffee.

It feels good to come in under budget again.  Last month was pretty big blow to my ego, lol.  The goal of next month is my annual pantry challenge.  We’ll have company in town and eating many of our meals with them, so it’s a good opportunity for us to eat the random things in our house.  There will be a significant meal plan to help us along too, since not having one was rather tough.  No more flying. 😉

How are you counting your crumbs this month? 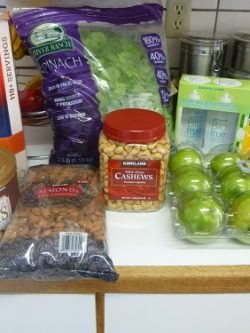 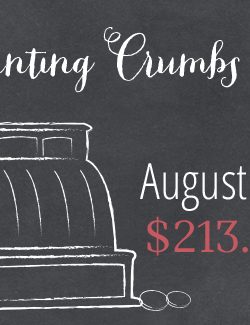