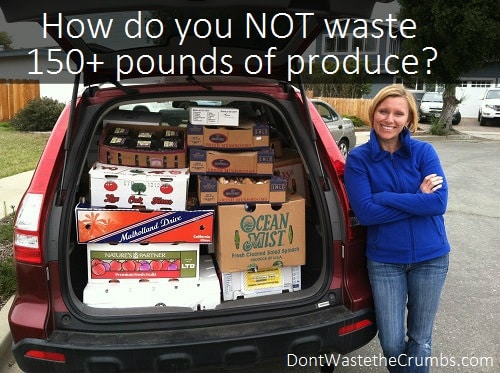 I’ve mentioned before that my dad is a chef, yes?

His hotel was hosting some function last weekend that involved produce.  LOTS of produce apparently.

As it ended Sunday, he sent me a text message asking if we wanted some berries.  Um, hello?  Of course we want berries!

Then he asked if we wanted carrots.

And mushrooms.  And oranges, tomatoes, spinach, pomegranate seeds and herbs.

He told us to bring the truck (our CRV) and load up, so we did.  That picture above is what we loaded into our truck.

You can’t see it, but the back seat and floor is packed in just as tight.  I was lucky to squeeze in the center console area otherwise I’d be hitching a ride home.

We brought home everything he had offered, plus avocados, bell peppers, orange juice, lemonade, grapes and pickling cucumbers.

All in all, it added up to more than 150 pounds of produce.

In our kitchen and entry way.

At the same time.

The day after I went grocery shopping at Costco.

How do you not waste 150+ pounds of produce?  Bless Others

When Mr. Crumbs had moved the last box into the house, we took a step back to see what we were dealing with.  Right away we knew we couldn’t eat 24 ripe and ready-to-eat avocados and a large flat of baby portabella mushrooms.  We were good for one or two avocados and maybe a pound of mushrooms, but anything beyond that would go bad and mushy before we got to it.

We made care packages for five good friends and our neighbors, dividing the avocados, carrots, peppers, oranges, mushrooms and other items between the families.

With those boxes out of the way, we saw approximately eight pounds of sliced carrots and 48 cartons of 100% orange juice and lemonade.

Again, knowing we couldn’t possible eat that much food, we divided most of it up between the families.  We ended up keeping just a few oranges juices and some packages of individually sized baby carrot packages for snacks, meals and smoothies. 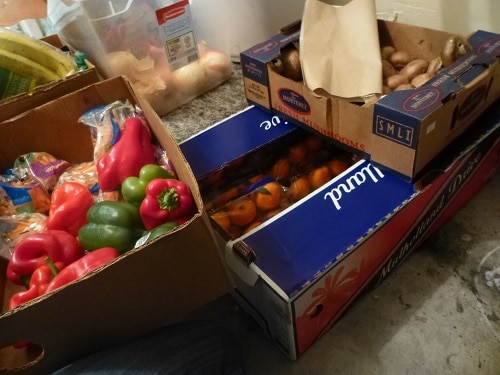 
While cleaning and chopping produce well into the wee hours of Sunday night, Mr. Crumbs and I bantered about going vegetarian for the week, just to prevent the produce from going to waste.  We even talked about going on another five day smoothie fast.

We didn’t make an official commitment to either, but both the tortilla soup on Monday and baked chicken on Tuesday had an extra serving of vegetables.  I started a batch of hearty spaghetti sauce and tossed in some extra carrots, bell peppers and used the fresh tomatoes instead of the canned sauce in the pantry.  There will be some extra veggies tonight and on tomorrow’s pizza as well.

As for the other meals, there hasn’t been an official breakfast or lunch all week.  The kids and I have been snacking on oranges, grapes and berries since there’s plenty to go around.  We would made a few batches of pancakes, but our fridge is so full that there honestly isn’t any room to store them! 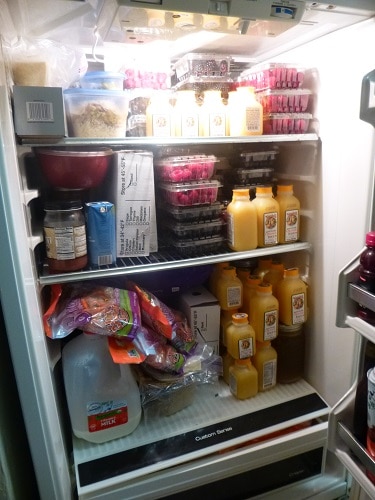 
My eyes were on the berries and peaches while Mr. Crumbs stared down the bell peppers.  How could we preserve as much of the food as possible, without just taking up jars in the kitchen?  Was there a logical way to approach these massive boxes?

At first we didn’t think there was, so we just kept our heads down and continued to wash and chop to see where it would lead us.  Eventually, a light bulb went off and it all started to make a bit more sense.

We considered what we would ordinarily do with the food, and preserved it so that it could be used in that way.

For example, bell peppers.  We usually use these as pizza toppings, in stir-fry or the occasional mango salsa.  Since once-frozen bell peppers are great in cooked dishes, we sliced nine pounds of bell peppers and froze them in sandwich bags for future dinners. 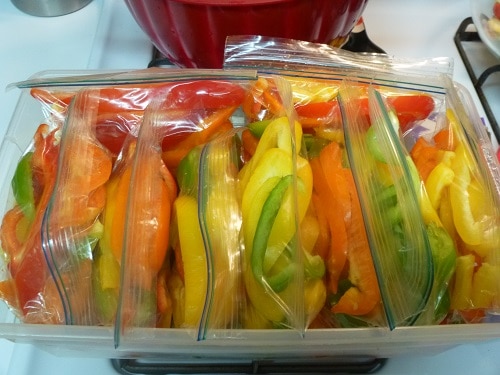 We took a similar approach for the rest of the food as well, but also considered what type of groceries we spend our money on and tried to focus on those items in particular:

We’ve made serious progress so far this week.  All day, every day, we’ve had three crock pots and a dehydrator going full force.  I’m switching out a tray of flash-frozen fruit each morning and night and you can move things around in the fridge a bit more.  Although very carefully.

Four days into the preserving process and here’s what we have to show for it: 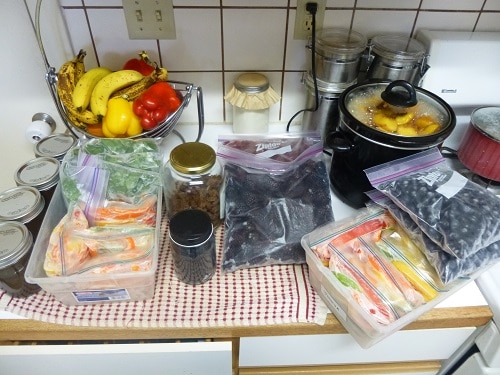 We’re hoping to get another 3-5 pint of blueberry peach butter, 7-10 quarts spaghetti sauce and 1-2 quarts of homemade raisins.  I’ll be trying my hand at infused vinegars and oils too, as well as pickling!

Our abundance of produce sparked an idea for a short preservation series before jumping into our next topic in Nourishing Traditions.  Knowing how to preserve food is important, so we’ll cover all the basics involved with:

This way when the farmer’s markets start to flash their “last week” signs as summer draws to an end, you’ll be prepared to buy extra and preserve it for winter.

What is your current preferred method for preserving?  Have any issues or questions that should be addressed in the series?  Tell me in the comments! 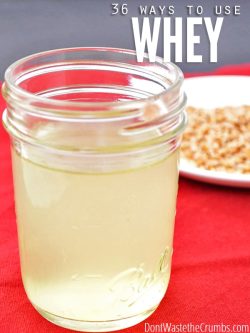 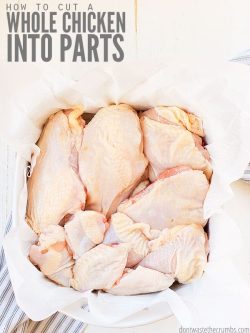 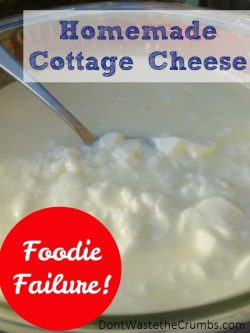