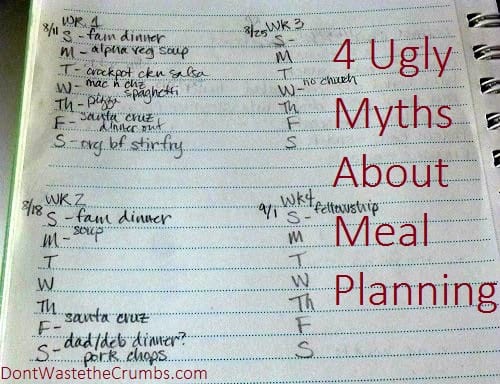 Back in the day, a four week meal plan used to take me less than 30 minutes to create.  From  start to finish, I had it down to a science.  It was awesome.

Last week, I spent four days working on the month menu I shared with you yesterday.  Four days?!

Obviously I’m out of practice.  Not only in planning for several weeks, but planning in general.  Can you believe the last meal plan I wrote was back in June?!  Yikes!  Someone needs to be practicing what they preach around here… 😉

Coming up with some ideas wasn’t too hard…  but my paper still had way more blanks than filled in meals.  It wasn’t until I sat down Sunday afternoon to type up those few ideas that the sky opened up above and a bright shining ray of sunlight beamed down onto my paper to show me the error of my ways.

Or could it have been the kids playing with their flash light?

In either case, there was a light bulb moment.  Something went “click” and suddenly it all made sense because I was doing it the wrong way.

I was making it WAY harder than it needed it be.

I knew how to keep it simple and how to make the most of the time spent n the kitchen, but my brain wasn’t putting it into action!

Once that thought pushed its way around the ugly myths about meal planning, it became easy again.  Here’s some insight to how my type-A brain was making it difficult, and how that little brain beacon helped to better steer the way.

MYTH #1:  Lunches should be something different each day.

And why does it have to be different every day?  Was there a law passed that I don’t know about?

As long as it’s something they like, my kids have no problem eating it every day for lunch.  I usually just eat something random from the fridge that no one else wants to eat anyway.

Our dinners are planned with variety in mind and that’s enough for both the kids and myself (Mr. Crumbs usually takes leftovers).  What did I gain by implementing a rule for varied lunches too?

FACT:  Lunches are only required to be nutrient dense.

Nearly every meal is filled with fruits, vegetables, nuts and cheese.  There are only so many of these ingredients in my pantry, so naturally there will be some overlap from day to day.  Actually, Tuesdays and Thursdays are identical!  The kids LOVE healthy homemade lunchables.  Why not have them twice?!

The only grain planned (which we’re not eliminating, but keeping “in check”) would be on Wednesdays and two out of the three options are sourdough.  Leftovers are slated for Fridays (and maybe Tuesdays if we happen to have a lot of them), so as long as dinners are nutrient dense too, we’re good to go.

MYTH #2:  Breakfast and lunch should always be different.

What would happen if the kids chose trail mix for snack on the day they were having it for lunch too?  Is there a such a thing as too many nuts in on day?

And that extra tablespoon of dried cranberries?  Pu-lease.  It’s droplets on a windshield compared to the downpour of cranberries The Girl considers as a snack.

FACT:  There’s no such thing as too many healthy foods.

It would appease the right side of my brain if the kids weren’t allowed to have trail mix as a snack on Mondays, but that side needs to get over it.  It shouldn’t be complaining that my kids LIKE nuts and fruits and are eating them willingly!

MYTH #3:  Snacks are made of starches and are supposed to crunch.

When we started our real food journey a year ago (whoa… has it really been that long?!  Feels like it was last month…) one of the first things to go was crackers.  Partially because every cracker seemed to be loaded with either hydrogenated oils or high fructose corn syrup, but the REAL reason was my daughter.

Somehow, in her mere 3 years on the earth, she had come to believe that “snack” meant “cracker.”  Anytime she wanted a snack, she asked for a cracker.  After breakfast, after lunch, before dinner… and since we’d only give her one graham cracker, we thought nothing of it.

Until she started asking for crackers for breakfast.

I know, I probably have no clout because I happily feed my kids cookies for breakfast, but hear me out.  Her asking for crackers meant she didn’t want anything else.  She turned her nose up at bananas and apples.  She cringed at the thought of scrambled eggs.

My 3 year old daughter had been reeled in and hooked onto the addictive properties of food additives.

And it scared the daylights out of me.

So I stopped buying crackers, starting offering fruit instead and haven’t turned back.

FACT:  Snacks are whatever foods you serve and eat between “meals.”


She now regularly asks for apples and “broken bananas” for snacks and snack-y meals.  It’s wonderful.  And if she ever has a cracker outside our home, she knows it’s a HUGE treat.

I refuse to give-in to the crunchy mentality of snack time.  Making my own crackers would be the only way around it.  But given that the process of making sourdough crackers takes way more labor and time than peeling an easy-peel orange, I’m not budging.

Look here little ugly voice.  You’re starting to get on my one working nerve…

In case you don’t remember the meal plan (or didn’t feel like clicking over), here’s what snacks and lunches look like every week:

Seeing the very small amount of baked goods started to make me feel like there shouldn’t be ANY grains at all for breakfast.  Kids don’t need to start their day with sugary muffins.  Carb-laden pancakes will just bog down their brains.  Oatmeal may hold them over, but it’s boring as all get out, right?

And then the voice of reason once again stepped in.

FACT:  In order to eat grains in moderation, you must actually eat them.

Kids are growing and their bodies need the fuel that the natural sugars found in fruit, vegetables AND GRAINS can provide.   The kids’ job is to give me their full attention during school and to put their clothes on the right way.  My job is to provide the tools they need to do their job.  One of those tools is a nutritious breakfast that satiates their bellies and wards off hunger until snack time.

On top of this, we’re eating grains in moderation… but that’s not the same thing as not eating them at all!

ONE muffin (made with whole wheat) and a side of fruit… TWO small pancakes (made with sourdough) with real butter, maple syrup and fresh berries… we’re not gorging ourselves on processed white flour around here.

The kids are usually in the kitchen with me baking nowadays.  I’m teaching them basics like how to stir, how to crack an egg, how to measure.  There’s bigger lessons too like which foods nourish our bodies and which ones don’t.  On top of it all, they’re learning self-control and moderation.  All of the above are very important skills in my opinion.  Wouldn’t you agree?

Surprisingly, my brain didn’t give me much of a hard time about the dinners.  Maybe it’s been conditioned enough to know that it’s ok to serve spaghetti when you have 15 minutes to eat dinner.  Even before we started the Fresh Start series this past January, we had been…

Once I got over the brain bumps of breakfast, lunch and snacks, planning the rest of the month was a piece of cake!  Mmmm… cake…

Am I the only one whose brain sometimes does more harm than good?