Navigation
You are here: Don't Waste The Crumbs » Recipes » Sides » How to Cook Spaghetti Squash in the Instant Pot 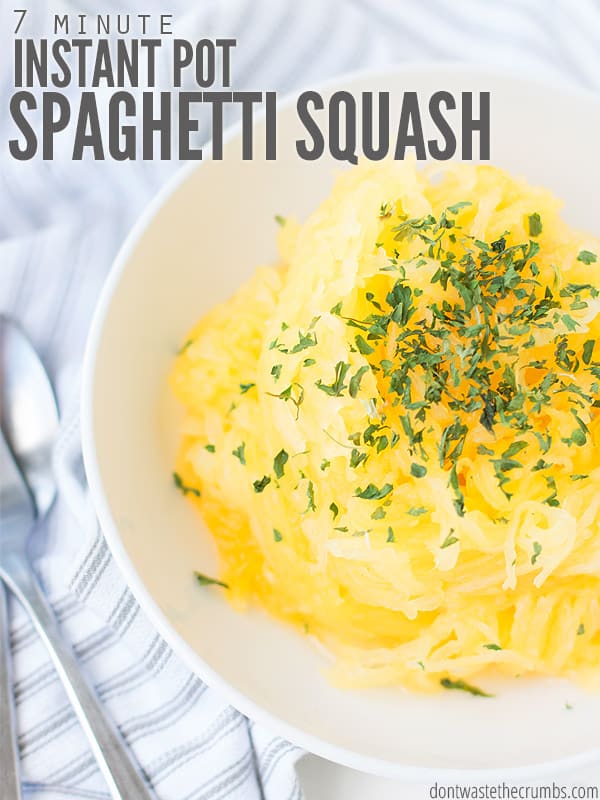 I dove in one January, learning as much as I could about the Instant Pot, including…

… and I also learned how to cook spaghetti squash in the Instant Pot!

Of course I also learned how to make other basic foods that save me money too, like…

… but I think the spaghetti squash in the un-sung hero of the squash family. 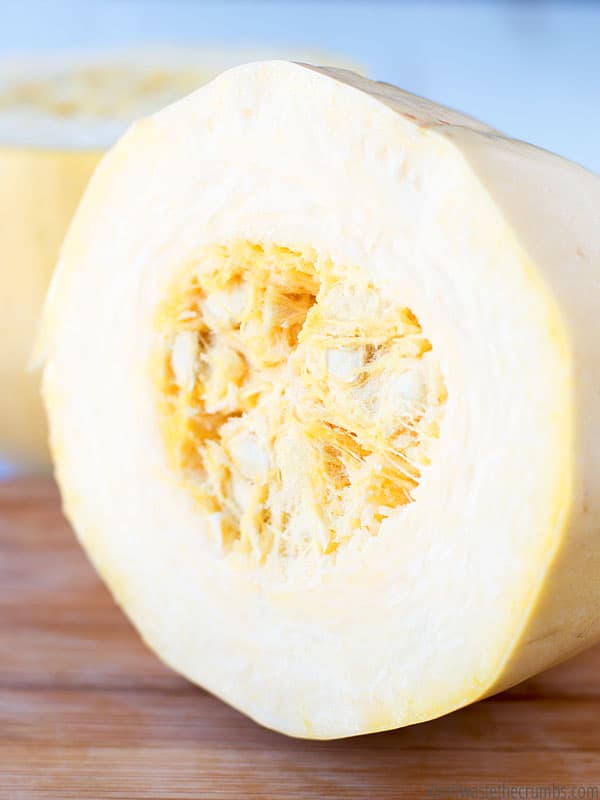 Odds are you already know about the acorn squash and the butternut squash.

And of course EVERYONE knows about pumpkin.

But spaghetti squash? Not so much.

Like all the other winter squash, spaghetti squash is in season in the fall and winter. It’s yellow and has seeds in the middle, but the flesh is very different from other squash.

Once you cut open a spaghetti squash, you don’t see smooth flesh. You see what looks like little strands of spaghetti, hence the name! (You can see how I used spaghetti squash instead of pasta in my giant Italian meatball recipe!) 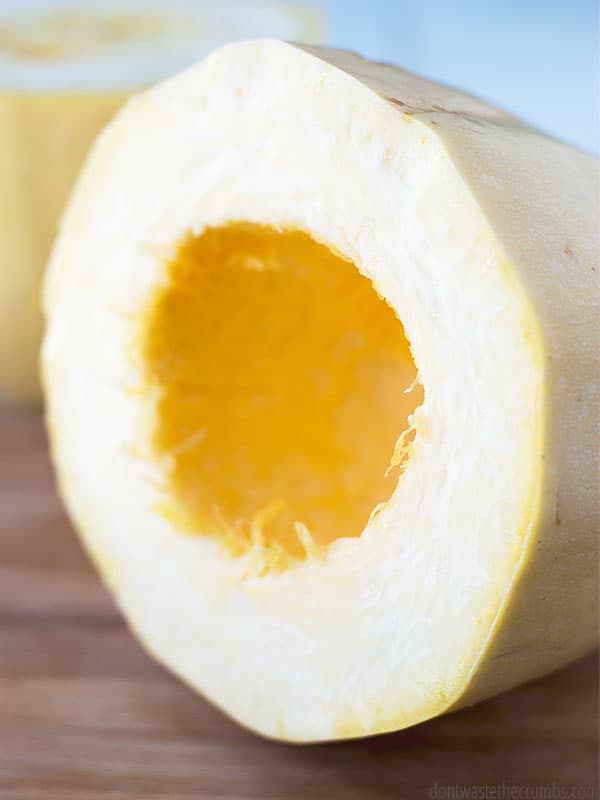 Learning how to cook spaghetti squash is a basic kitchen skill, and one that I think many people get stumped on BECAUSE of those strands.

So that’s why I’m showing you how to cook spaghetti squash in the Instant Pot. It’s SO easy, super fast and you get perfect spaghetti-like strands every time! 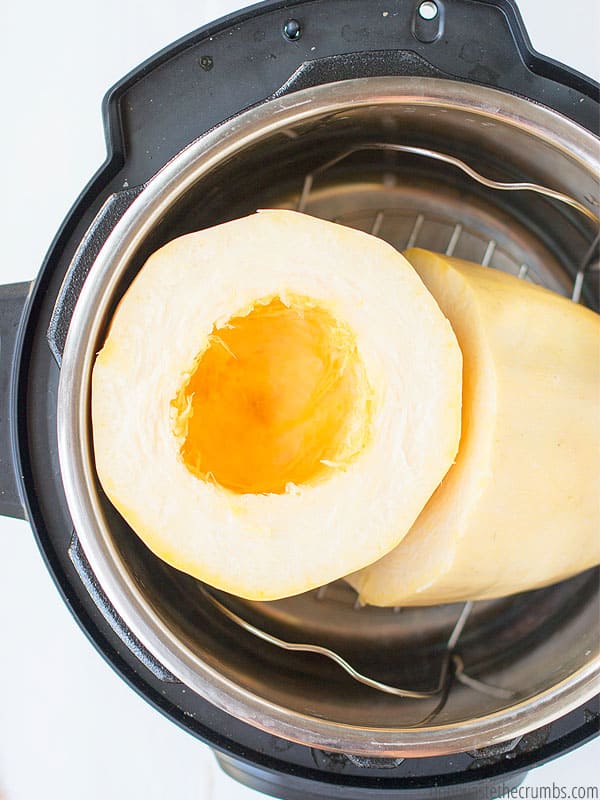 How to Cut Spaghetti Squash

How you cut spaghetti squash is actually important, so let’s talk about it.

First, there are two ways to do it:

If you cut spaghetti squash from top to bottom, your strands of squash will be short. They’ll still look like spaghetti, but no one will be twirling around their forks at the dinner table.

If you cut spaghetti square in half around the middle, you get long, luscious strands of spaghetti squash. And that’s what we want.

So cut your spaghetti squash around the middle folks! 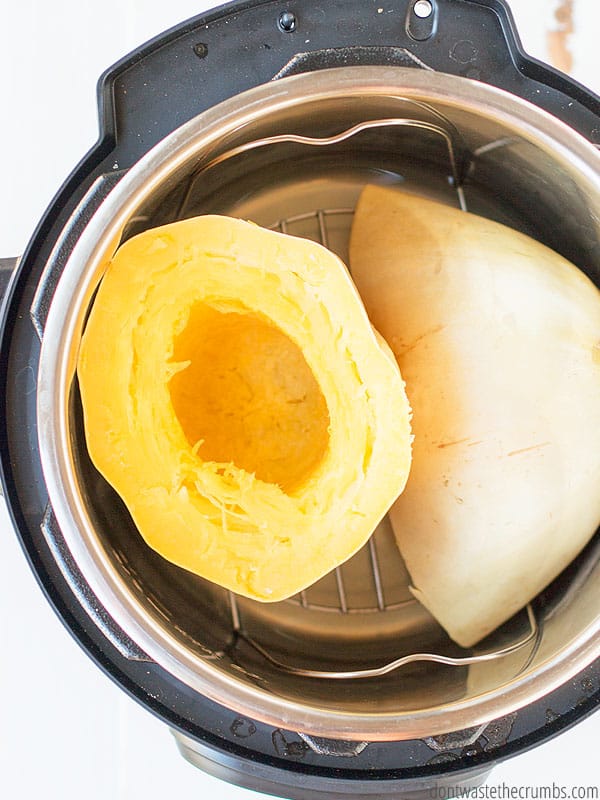 Once you cut your squash in half (around the middle!), use a large spoon and scoop out the seeds.

If you’re diligent about reducing food waste, save the flesh you scooped out for homemade chicken stock using kitchen scraps.

You can then clean and roast the seeds, similar to how you would roast pumpkin seeds! 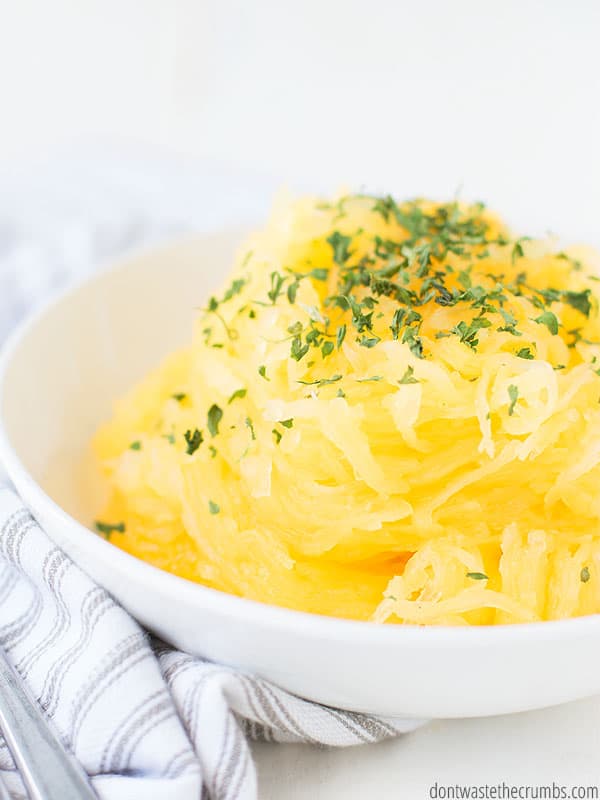 How to Cook Spaghetti Squash in the Instant Pot

Spaghetti squash takes only 7 minutes in the Instant Pot under high pressure. A quick pressure release ensures you don’t turn your strands into mush and BAM – you’re done. Yep – just like that!

I’ve made several spaghetti squash recently, since we’re eating way more vegetables after completing the Whole30, and I’ve noticed that there can be some variation in the texture of your spaghetti squash if you change a few variables. 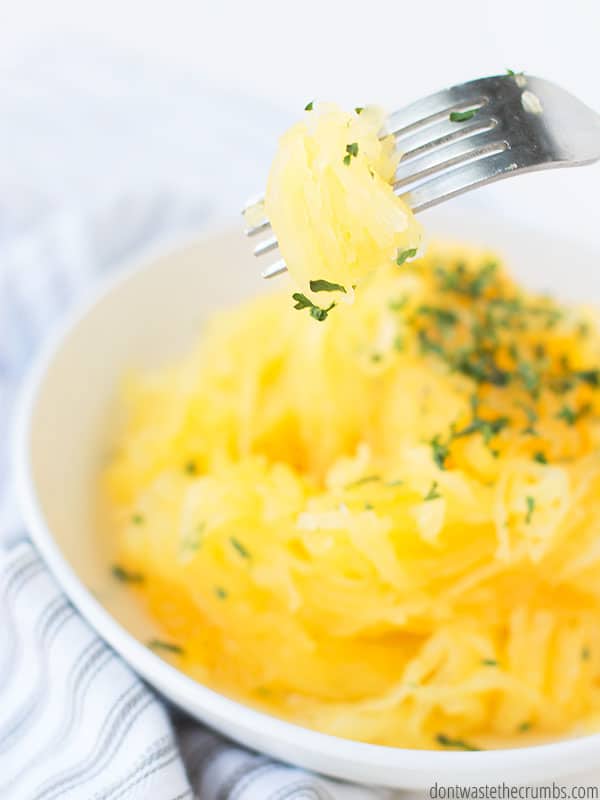 How should you eat spaghetti squash? Here are my two favorite ways:

If you’re new to the Instant Pot world, here are the most common questions I get:

What size Instant Pot do you have?

You also have to leave a certain amount of space in the pressure cooker when using it. There is a max fill line for liquids. And the general rule is to not fill the Instant Pot more than 2/3 full. The 8 quart gives me more room to cook.

One Instant Pot hack I learned is to use a 6 quart pot on top of an 8 quart pot to cook two elements of one meal. You can read how that works HERE.

How do I know what size Instant Pot to buy?

There are a few things to consider when you choose an Instant Pot. When it comes to size, think about how many people you typically feed, do you want to cook large batches of food, will you be cooking meals or staples (like beans).

While the 6 quart Instant Pot is very common because of the lower price point, I recommend the 8 quart since you have more options with it down the road. You can easily cook a 6 quart Instant Pot recipe in an 8 quart. It’s better to have a little extra space than wish you had a bigger Instant Pot.

Have you gotten rid of your slow cooker?

I still have my slow cooker for now. But it’s been demoted to the basement. I am completely in love with my Instant Pot and am excited to see how I can use it in place of my slow cooker.

Is there a texture difference between slow cooker meals and Instant Pot meals?

I found the taste and texture of Instant Pot meals to be so much better than the slow cooker. The whole chicken recipe that I use, tastes much more like a roast chicken in the oven. There’s no mushy meat with the Instant Pot!

4.0 from 1 reviews
How to Cook Spaghetti Squash in the Instant Pot

Are you a big fan of spaghetti squash? What’s your favorite way to eat it? I’d love to hear your recipe ideas in the comments section below!