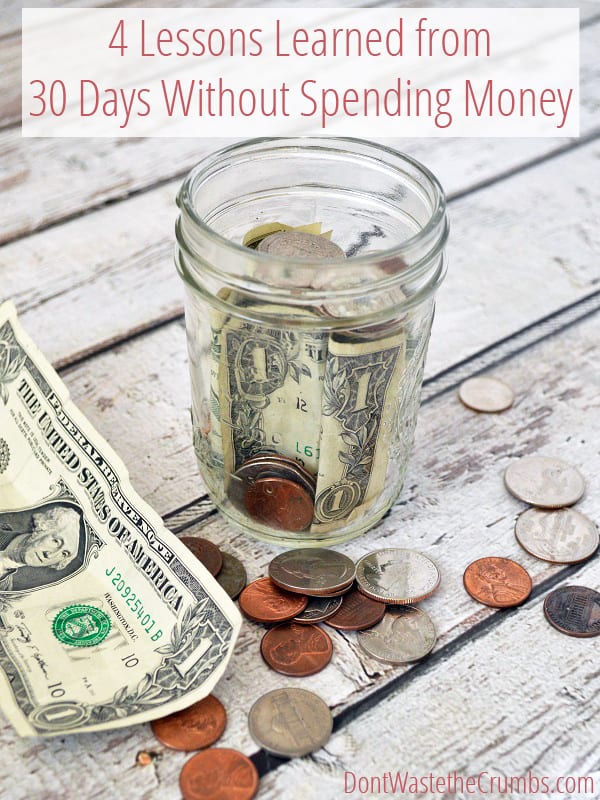 Last August , while standing at the kitchen sink washing the dishes, I found myself mentally going through the contents of my kitchen cupboards and thinking to myself, “Wow.  We have A LOT of food.”

We normally have a “fair” amount of food in our kitchen, but after two very generous gifts from friends and family, we had much more than normal… yet I still found myself making a mental shopping list of what else we needed for the week.

Here I was, standing in a kitchen that was bursting at the seams with food, and I thought we didn’t have enough.

I humbly, and embarrassingly confessed this thought to Mr. Crumbs and he calmly took a break from flipping  bacon to look at me and say, “Well, how about we go a month without spending any money?”

In short, we did it.  We determined August 2014 to be a no-spending month and we survived.

You can read the whole story and the “rules” of the challenge here, and we posted updates on day 10, day 20 and lastly day 30 too.  Some of my overall thoughts on the challenge are the last update, but here we are nearly two months after the challenge ended and the lessons I’ve learned are STILL weighing heavy on my heart.

To say that this challenge completely changed me is an understatement, and I have no doubt that those who participated in their own version of a no-spending challenge can relate.

Oddly enough, the biggest eye-opener of the entire experience wasn’t food related.  Sure, it stemmed from food at the time, but the lessons learned reach so much farther beyond the kitchen.  The way I now look at life, at the blessings bestowed on me and my stewardship of them is forever changed. 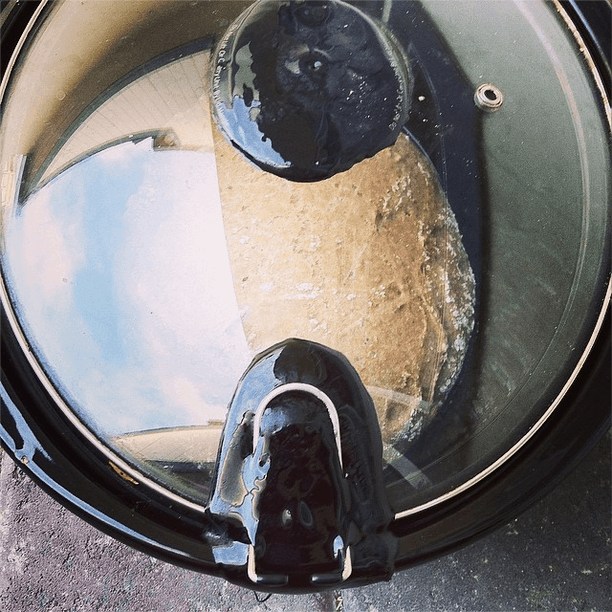 As the person primarily responsible for meal planning, shopping and cooking, this is a hard pill to swallow.  Naturally, if a recipe says I need something, then I need it.  The kids want chocolate chip cookies, so I need chocolate, right?

What if instead buying more, we made something different?  Maybe peanut butter cookies or oatmeal raisin?  Neither are chocolate chip, but that doesn’t make them bad.

To run out of something, and not replenish it, is a very, very tough concept to deal with, generally speaking.  It’s even harder when you’re a former coupon addict and shopping in bulk and stocking up are concepts permanently etched into your brain.

I ran out of A LOT of things during that challenge, and I even melted one of my favorite kitchen appliances, my slow cooker.  And you know what?  The world didn’t end.  We didn’t starve.   In fact, what we ran out of in tangible goods, our hearts grew in contentment with what we did have.  Both inside, and outside of the kitchen. 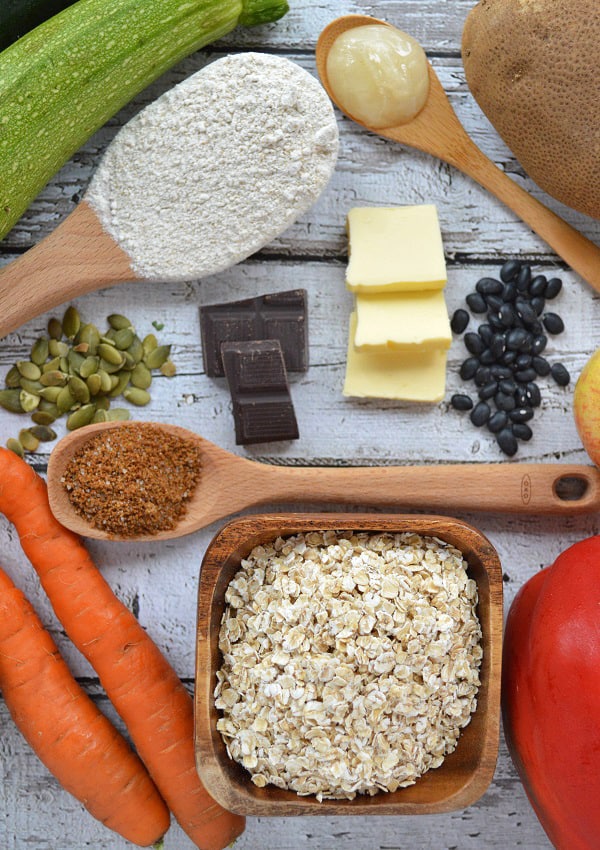 2.  Laziness can creep in and overtake hard work.

A 1/2 mile for bananas, 2 miles for a play date and countless more for “just looking”… We chose to live in the middle of our small town so that we would be within walking distance of the things we visit most:  grocery stores, parks and family.

It didn’t hit me though until I was restricted to just one tank of gas for the month.  There was already weekly commitments – church, bible studies, swim lessons and CSA boxes – so driving outside of those was pretty much off limits so that we COULD make those commitments.

We couldn’t spend any money, so there wasn’t a need to go to the store.  However, when it came to play dates or the park – my first instinct was to drive instead of walk or ride bikes… which is a shame when our destination is no more than a 10 minute walk.

The same can be said for the work done in the kitchen too.  Buying bread because there wasn’t time to make it from scratch.  Buying tortillas because there wasn’t time to make those either.  Letting a small head of lettuce go bad because I already felt like I had spent the WHOLE day in the kitchen and I really didn’t feel like cutting ONE MORE THING.

As an outsider looking in to this experience, I’m shocked at how much good I forgo because I’m too lazy to work for it. 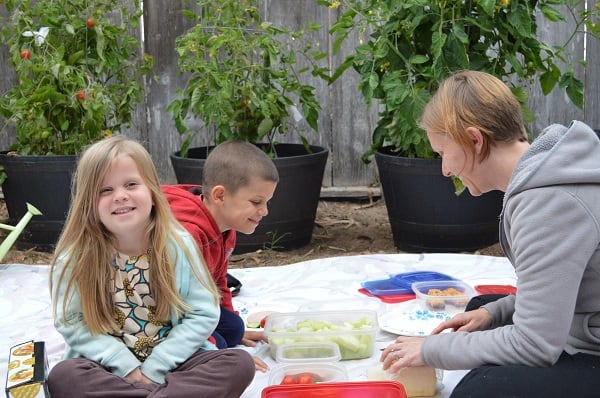 3.  Meals aren’t defined by the food we eat.

I shared what we ate throughout the challenge, and by the end of those 30 days, our meals weren’t exactly glamorous.  Peanut butter on biscuits with pickles, tomatoes and 1/2 apple was a common lunch.  So was faux oatmeal, consisting of corn grits, chia seeds, hemp hearts, oat flour and wheat germ.

The only reason dinner seemed halfway decent was because there was meat in the freezer from the previous month.  But even that was used sparingly so that by the end of the last week, we weren’t feeling like rabbits eating salads and rice every night.

I distinctly remember one lunch where each of us had something different on our plate.  I had tuna, my son had salmon and my daughter had chicken.  The three of us shared pickles, tomatoes and leftover biscuits.  Despite the randomness of combing leftovers with what was in the pantry, it was still lunch.

Throughout the challenge, regardless of what we ate, we always ate together.  The company we keep and our time together defined the meal, not the food. 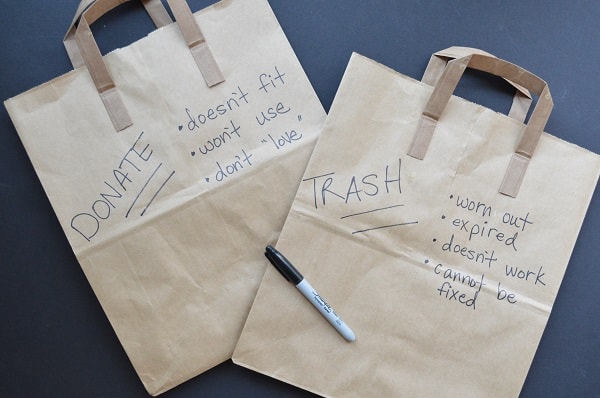 In some ways, I think the typical American lifestyle is characterized by stuff.  Houses.  Cars.  Furniture

It’s consumerism.  As a society, we’ve become a bit too concerned with how many THINGS  we can buy.

Don’t get me wrong, I like stuff.  Stuff can be good.  But when you can’t spend a penny, your perspective changes a bit.

That new shirt?  A splurge on coffee?  A new book?  None of these are bad, per se, but they’re all just stuff.  And as it turns out, you can easily live without them.

The same goes for the too many cans of green beans I used to buy because I thought I needed them.  Or the several types of sweetener, when one will do the trick just fine.  (Even more so when you’re trying not to eat as much anyway!)

Shortly after we started this challenge, I read this post by my sweet friend Elsie (who I also met at Allume!) on simplifying your wardrobe.  Totally unrelated to food I know, but hear me out.

Using her rule of 10 made me seriously question what items I loved, and which ones I didn’t.  What’s the point of hanging on to things we don’t enjoy?  That old shirt that is BEYOND faded or those jeans that are simply not flattering?  Why am I holding on to them when I don’t even wear them?!

It spawned me to go through all of my closets and put items into one of three categories:

I won’t go into the details into every little thing that fit every category, but my point is this:  I got rid of four large sacks full of STUFF and I’m living to see another day.  This challenge made me go back to the simple question of want versus need, and taught me to answer honestly. 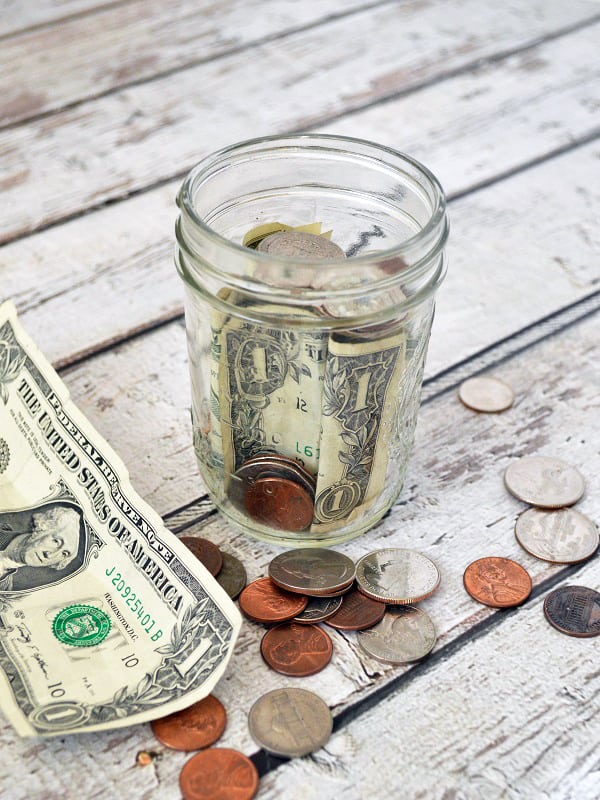 Our original intentions of this challenge were simply to eat what we already had, instead of getting more food and being wasteful.  As you can see, we got a whole lot more than we bargained for.

My advice – the next time God tugs at your heart strings to do something a bit out of the box, listen.  He likely has something greater in store for you than you might think.

What’s the greatest and/or toughest challenge you’ve ever completed?  How did it change you? 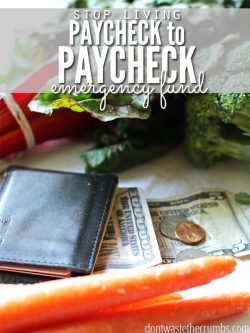 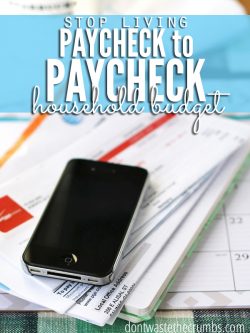 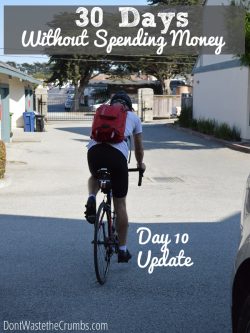 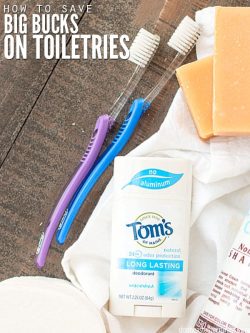