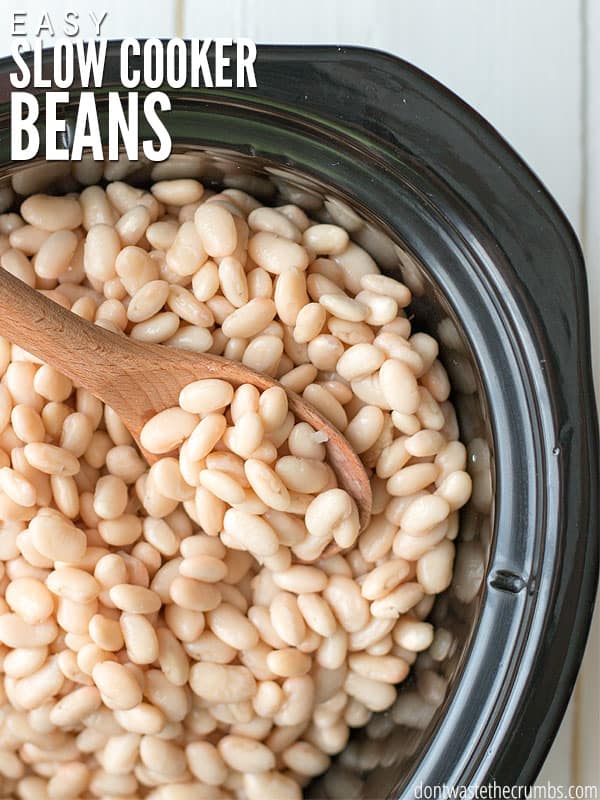 Ever since I realized you can use a slow cooker to make basic ingredients for meals, like making all-purpose slow cooker chicken for salads or tacos, I love my slow cooker more and more.

I’m also finding more ways to use it, like making a big batch of homemade beans in a slow cooker.

In my opinion, beans are an underutilized food. They’re packed with fiber, iron and are a super cheap source of protein.

Perhaps their bad rap is because many people experience foul smelling gaseous side effects when they eat beans. I get that, because certain members of my family were known to have “stinky toots” after eating a meal that had beans.

It was especially noticeable when we ate canned beans, but ever since I learned how to de-gas beans, we don’t have that problem much anymore. The kids love having black bean brownies regularly for dessert! 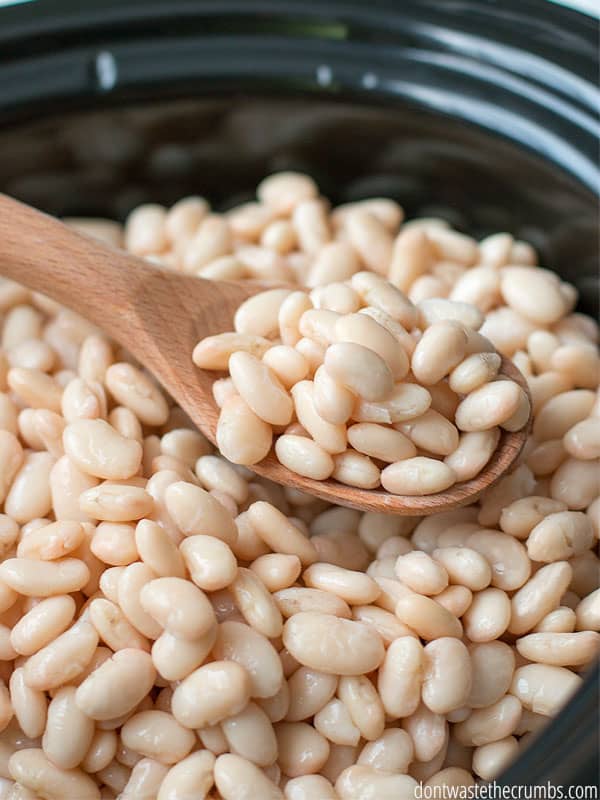 You Can Make Beans in a Slow Cooker?

If you’ve ever cooked dried beans from scratch before, you know they cook fairly easily on the stove. But I really don’t like using the stove when it’s warm outside.

Our gas stove puts off a lot of heat, even on its lowest setting, and it doesn’t take much cooking before the kitchen starts to feel like a sauna in the summer.

I’m also not a fan of being a slave to the stove. That’s one reason I make homemade chicken stock in a slow cooker – so I don’t have to stand around the kitchen for a long time ensuring the stock stays at a constant simmer without running out of water.

Depending on what type of dried bean you’re cooking, you might be hanging around the kitchen anywhere from 2-6 hours if you were making them on the stove. Even if you have a whole day dedicated to cooking at home, that’s still a long time to hover over a single pot.

Since many families (mine included) don’t have dedicated cooking days, this essentially rules out cooking beans from scratch entirely.

But there’s a catch: I prefer my family to NOT have stinky toots.

This means either not having beans 9 months out of the year, or choosing a different method for cooking beans from scratch. I choose the latter. 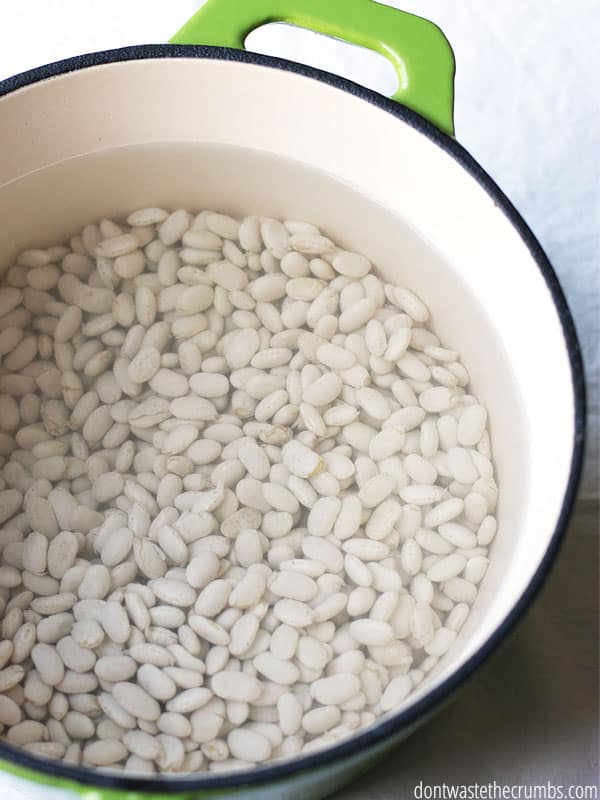 How to Make Slow Cooker Beans

Although the beans will be COOKED in the slow cooker, I still prefer to soak them on the stove. The burner is on for maybe 5 minutes – just long enough to get some bubbles going in the water. I can do this in the morning or before bed on any day of the week without a problem.

Plus soaking is the key to getting rid of the stuff that causes stinky toots!

Once they’re soaked though, that’s when I use the slow cooker.

Since beans get bigger as they cook, you don’t want to overload the slow cooker with too many beans. Allow plenty of room for the beans to cook in the slow cooker – about 1 cup of soaked beans per 1 quart of a slow cooker. 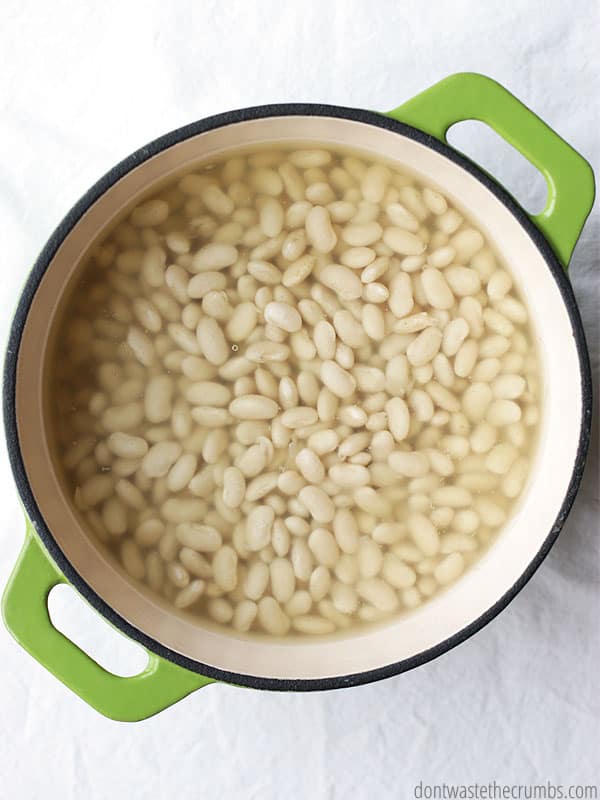 To Salt or Not to Salt the Beans

Some home cooks swear by adding salt or baking soda to beans in order to help keep the beans in tact as they cook.

I prefer the taste of salt over baking soda and have done this a few times myself with great results. Now it’s part of my standard recipe. You can omit if you prefer.

If you want to flavor the beans so that they are tastier on their own, you can add a bay leaf, peeled garlic cloves or dried herbs to the beans at the start of the cooking process. This is entirely optional, and it’s up to you how much of these aromatics you use, or if you use any at all.

I use white beans in my northern beans and ham soup, so I add just a tiny bit of flavor to white beans to enhance the soup – one bay leaf and one garlic clove.

On the other hand, I don’t use any aromatics to garbanzo beans or black beans. Since I use both garbanzo beans and black beans in a variety of recipes – from tortilla soup to brownies to southwestern salad – I find it easier to start with unseasoned beans. 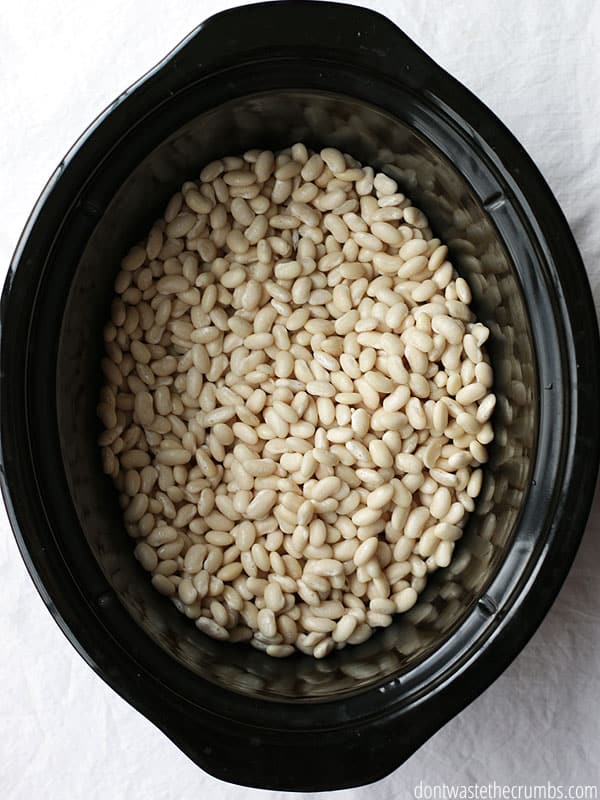 I prefer to cook beans on low, so I’ll make sure the beans are soaked, drained and rinsed before I go to bed. Then the next morning I’ll put them in the slow cooker, top them with water and set the cook time to 5 hours. This usually works out to my checking the beans at lunch.

Since we almost always have lunch at home, it makes it easy and convenient to make slow cooker beans amidst our busy days.

As a general rule of thumb, set the timer for the lower end of the range and check for done-ness every 30 minutes thereafter. Remember to drain the beans when they’re done otherwise they’ll keep cooking. 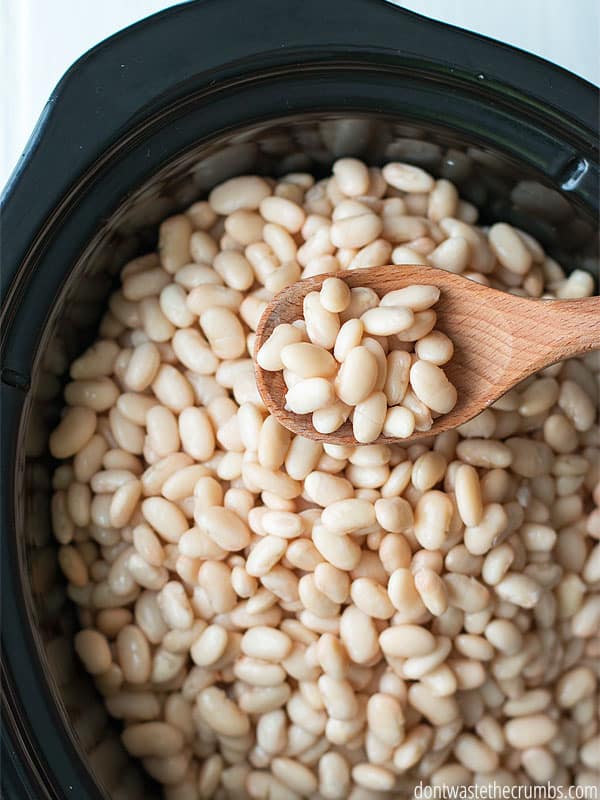 Print
Ingredients
Instructions
3.5.3208
I wish I had known that making slow cooker beans was so easy so I could have tried it sooner. Now that I’ve done it a few months, I’ll never go back to the old way!

My kids beg for beans when I make these recipes:

Do you use salt or baking soda in your slow cooker beans? How do you prefer to cook your beans?