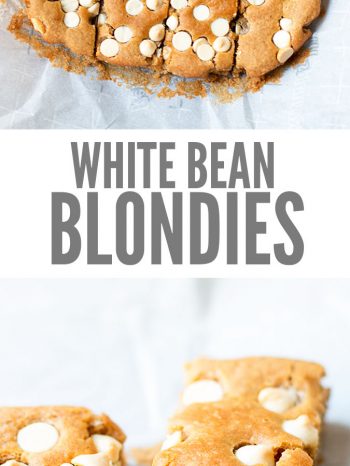 This recipe for delicious white bean blondies is so easy to make, and my kids love it! Baking with beans instead of flour adds protein to this healthy, naturally sweetened dessert, just like black bean brownies and maple pecan blondies!

Remember when I shared that my kids ate a whole pan of black bean brownies in two days?

Um… well… they ate a pan of these white bean blondies in one.

OR, I got wiser and STOPPED forcing my bean-hating family to eat beans in dishes they don’t like and STARTED to offer beans in ways they DO like.

I think it’s the latter.

What are White Bean Blondies

So If chocolate gives color and flavor to brownies and blondies obviously don’t have color, do they not have flavor too?

Thanks to Google, I learned that blondies traditionally have a butterscotch flavor AND that the flavor comes from brown sugar and butter. Mmmm. My two favorite words.

After several attempts at making White Bean Blondies (including one where we did a side-by-side taste test of white chips versus butterscotch chips), I perfected a recipe. My kids ate the whole pan! It didn’t taste like beans. It tasted like amazingness (I Love Feeding My Kids Beans And Not Hearing Them Complain About It).

I like making these white bean blondies because they are:

You can make this simple recipe with just 4 ingredients!

You can make this recipe in 3 simple steps:

It is that easy.

You can add vanilla or chocolate chips (I think vanilla chips are AMAZING in this recipe), but avoid butterscotch chips. They failed miserably in this recipe, which surprised me. The butterscotch chips had a processed sugar alcohol taste to them, and not only ruined the brownie but melted and left behind burnt sugar holes in their place.

You may be wondering whether to use canned beans or dried beans.

Canned Beans: convenient // still have to rinse // might give you stinky toots

Dried Beans: economical // you can de-gas them to avoid stinky toots // can be cooked in a slow cooker // cost less overall

Now excuse me while I go eat brownies for breakfast. 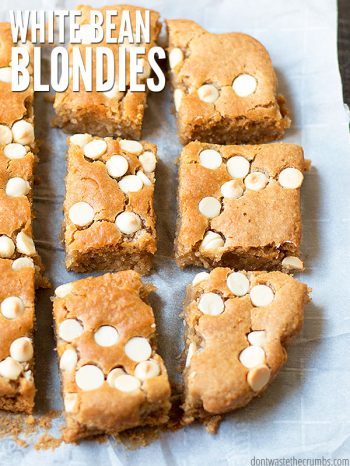 Naturally sweetened recipe for delicious white bean blondies – my kids love it! Baking with beans instead of flour adds protein to this healthy dessert. 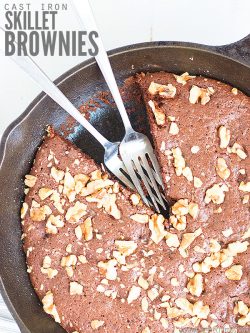 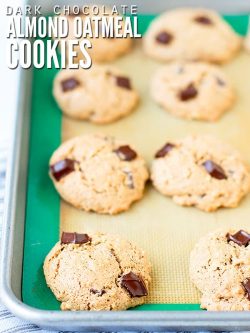 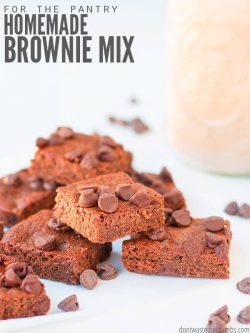