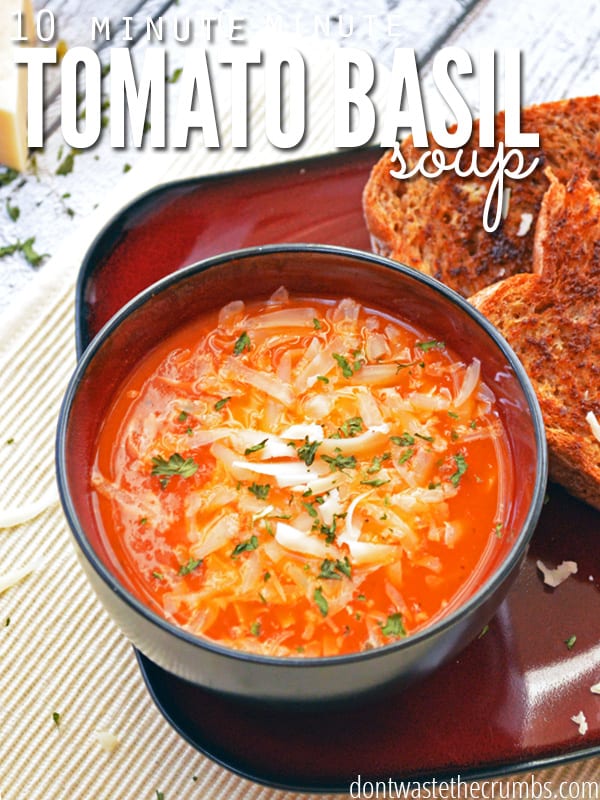 I’ve mentioned before that my husband grew up as a picky eater. He’s changed greatly though since childhood and as time goes on, his parents recognize him less and less at the dinner table.

I wasn’t around for the days of surviving on macaroni and cheese and green beans, so my perception is slightly different. Still, it doesn’t stop my jaw from dropping when he pulls a grilled cherry tomato off a skewer stick and eats it. Whole. Without flinching.

Or when he does the same thing to a portabella mushroom.

Or when he eats an entire bowl of cream of asparagus soup!

We’ve been eating soup once a week for roughly five months now and this man has gone from one extreme of not eating soup at all, to the opposite end by requesting tomato basil soup (with the primary ingredient being a formally despised fruit) nearly every week.

A friend convinced me to try tomato basil soup, raving that every single member of her five-person household loved it. Her verbal recipe sounded delicious, but I was skeptical that my tomato-hating husband would take one whiff and turn up his nose.

As it turns out, he did turn up his nose, but he also willingly took a bite… and then another, and then another. Halfway through his first bowl he raved at the soup too, claiming to prefer it even over his beloved hearty minestrone. I was doubtful, thinking he was just being kind as I had so bravely served him a hot steaming bowl of pureed I-can’t-stand-those-things.

And then he served himself a second bowl.

Tomato basil soup up was a hands-down winner the first night, but it has quickly become a family favorite (as if seeing it regularly on our real food menu plan wasn’t obvious enough!). The Girl gets excited when she hears we’re having “tomato sauce soup” for dinner and loves to slather the top with shredded cheese (which melts and makes the soup extra creamy).

The Boy prefers his cheese sliced and on the side, but pepper and salt (both freshly ground) on top are a must. Mr. Crumbs likes to spoon it on thick slices of rosemary olive oil bread.

I like it because I always have the ingredients on hand, the liquid is homemade organic chicken stock – FILLED with awesome minerals and nutrients – and it’s ready in only 30 minutes and no one ever complains when I make it. Ever.

Fresh off the stove, it’s a perfect Winter soup. When temperatures start to scorch, caramelize only the onions and garlic and let the blender take over from there (in a few batches, of course).

In either case, serve with freshly grated Parmesan (the real kind, not the Kraft kind), salt and pepper.  Oh, and don’t forget the bread.

This meal is featured in my FREE Vegetarian Meal Plan! 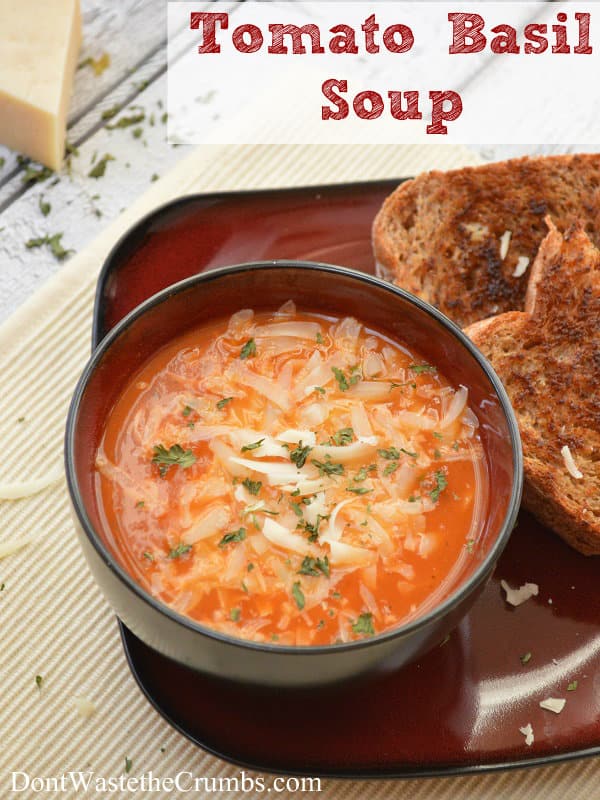 Print
Prep time
10 mins
Cook time
30 mins
Total time
40 mins
This delicious and satisfying tomato basil is one of the family's favorite soups. Serve with freshly baked rosemary olive oil bread if possible!
Author: Tiffany
Recipe type: Soup
Cuisine: American
Serves: 4-5 quarts
Ingredients
Instructions
3.2.1275
Cento tomatoes are naturally sweet because of the soil in Italy and they’re absolutely divine. You can probably find them locally, but I’ve found them to be MUCH more affordable when purchased in bulk on Amazon. In fact, the prices equates to 50% off!

These are the same tomatoes we use to make our homemade pizza sauce and using these in marinara would be delicious too!  If buying tomatoes isn’t in the budget, homegrown would likely be delicious too. Often times it’s not the ingredients that make dinner good, but the love that was used when preparing. 🙂