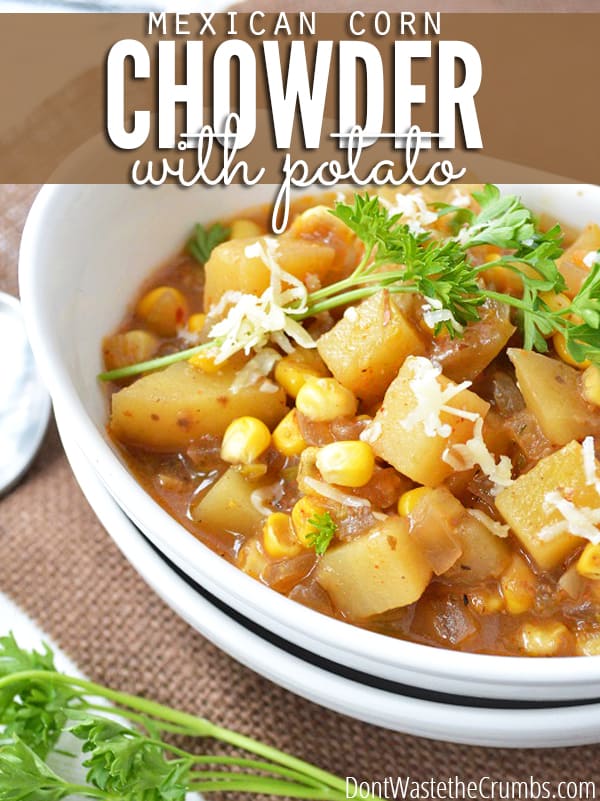 I’ve mentioned before that Mr. Crumbs isn’t a huge fan of meals made in the slow cooker.  He thinks that they all come out tasting the same, with a “slow cooker taste,” regardless of what the actual ingredients are.

That’s partly the reason why you don’t find too many slow cooker meals around these parts.  Sure we make spaghetti sauce and chicken stock in the slow cooker, and sometimes yogurt too, but that’s about it. (I use this slow cooker.)

Then this summer, he went out of town.

The kitchen became experiment central with salmon patties and stews and sausages and all sorts of items he’s not fond of.  This super simple, corn and potato chowder was one of the highlights of the experiments.

This chowder first originated from a curiosity of corn stock.  I made it, which was pretty cool in and of itself, but then I was stuck without a use for it.

So I took fresh corn that was on sale, mixed it up with the stock and taco seasoning and created something in a big pot that wasn’t half bad.  I added what was left of a recent batch of creamy cauliflower sauce, topped it with sour cream and cilantro and by the end, it was downright delicious!  So much so, that the three of us ate the entire batch in one sitting! 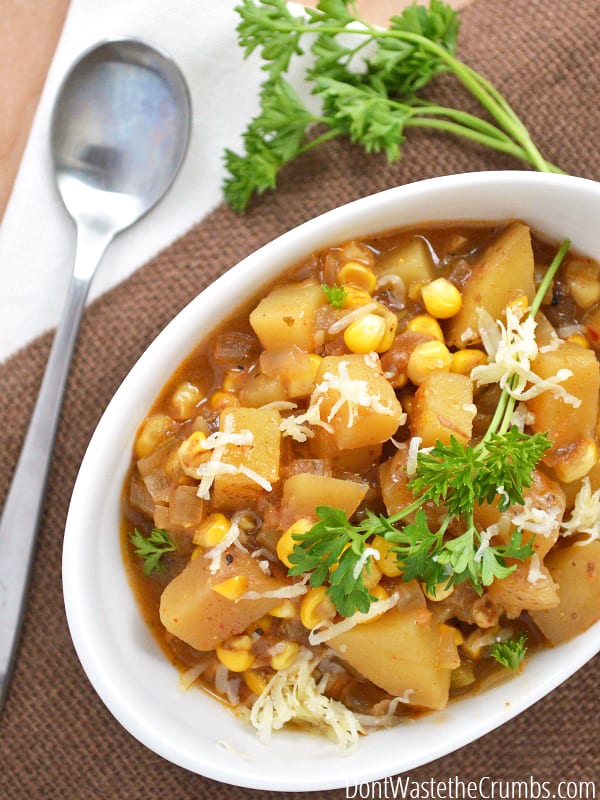 I replicated the recipe again, taking notes to how much of each ingredient to add, including potatoes since no chowder seems to be complete without them and it’s an easy way to stretch the meal.  It’s also adapted for the slow cooker, since there seems to be fewer hours in school days than there are in the summer.

I’m sharing my recipe for Mexican corn and potato chowder over at The Nourishing Home today, and you’ll definitely want to click over to get the recipe.  It’s naturally gluten-free, but can easily be adapted for dairy-free allergies as well.

Tips for serving a Crowd

I won’t tell you how frugal it is, but I will say this:  It’s VERY frugal.  And it’s incredibly easy to adapt for large families or hosting company:

A frugal, hearty meal that cooks while you sleep and won’t heat up the house.  Really, what more can you ask for?  Get the recipe right here!

PS: You can make this recipe in your Instant Pot! Read my recipe conversion tips HERE!