You are here: Don't Waste The Crumbs » Recipes » Sides » 7 Ways to Make a Baked Potato (FAST!) 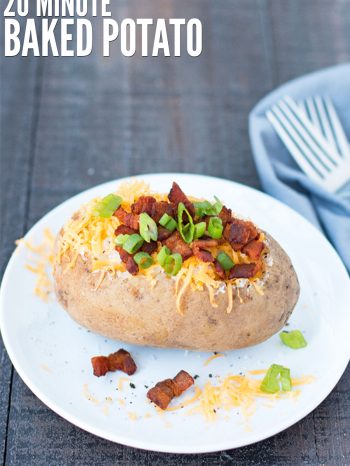 Here are the best ways to make a baked potato with step-by-step instructions for how to cook them in the oven, slow cooker, microwave, and even the Instant Pot! Potatoes come out perfect every time with fluffy centers and flavorful skins!

Everything You Need to Know About 7 Ways to Make a Baked Potato (FAST!)
1. How to Make the Perfect Baked Potato

I need to confess: I’m officially late to the potatoes-are-awesome train.

Not only are potatoes CRAZY CHEAP in the winter, but they’re SO versatile and easy to make.

You can fry potatoes using the same method in my fried sweet potato recipe, but today I want to talk about the baked potato. Specifically, 7 ways you can make a baked potato – fast!

How to Make the Perfect Baked Potato

That means plenty of salt and pepper folks – don’t be shy. If you’re going to stuff or serve your baked potato according to a theme (like a Greek baked potato or a Mexican baked potato), then season your potato appropriately to enhance the theme of the night.

Have you heard the myth that if you don’t poke a potato before you bake it, that it will explode?

It’s no myth folks, it is the TRUTH!

If the potato is exposed, cover with olive oil

Baked Potato In the Oven

There’s actually more than one way to cook a baked potato in the oven, and they’re all pretty awesome in their own right. Let’s give each method its own due credit, shall we?

Baked Potato in the Oven – Whole, Wrapped in Aluminum Foil

This is the method that most of us probably grew up with, which is why I’m listing it first. It’s one of the best ways to make a baked potato that turns out absolutely perfect, every time. Soft skin on the outside, tender and fluffy on the inside.

Step 2. Wash and poke the potatoes. Season with salt and pepper (olive oil is optional).

Step 3. Wrap the potatoes in aluminum foil and place directly on a baking rack.

Step 4. Bake for 45-60 minutes, or until a fork is easily inserted to the middle of the potato.

This method is the one most likely to “wow” your guests. Everyone knows a baked potato is usually soft… but a baked potato with crispy skin?! They’ll wonder how you did it!

Lucky for you, it’s no magic trick. It’s all because of the oil.

Step 2. Wash and poke the potatoes. Cover thoroughly with olive oil and season with salt and pepper.

Step 3. Place potatoes directly on a baking rack or on a cookie sheet and bake for 45-60 minutes, or until a fork is easily inserted to the middle of the potato.

Baked Potato Cut in Half in the Oven – Unwrapped

This method isn’t exactly true to the classic baked potato one for big reason: the potatoes aren’t whole.

I like this method because it’s like a really big French fry. The skin is crispy, the outside flesh is crispy and yet the insides are still tender and soft. Plus the cooking time is practically cut in half!

Step 2. Wash and poke the potatoes. Cut each potato in half lengthwise and cover thoroughly with olive oil.

Step 3. Season with salt and pepper.

Step 4. Place the potatoes on a cookie sheet, cut side down, and bake for 35-40 minutes or until a fork is easily inserted to the middle of the potato.

How to make a Baked Potato In the Microwave

I’m personally not a huge fan of cooking dinner in the microwave, but I’m also a real human being who sometimes forgets to start dinner on time. When this happens, the microwave can be a real life saver.

There two drawbacks to cooking a baked potato in the microwave.

BUT, I’m just letting y’all know. If you make a baked potato in the microwave and you don’t like how it turns out, don’t say I didn’t warn you.

Step 1. Wash and poke the potatoes.

Step 2. Place the potato directly in the microwave and cook on high for 5 minutes.

Step 3. Using an oven mitt or towel (because the potato will be HOT), turn the potato over and cook for another4-5 minutes, depending on the size of the potato.

Note: You can cook two potatoes at a time using this method, but if you cook three or more, you will likely have to adjust the cooking time.

Starting a baked potato in the microwave and finishing it in the oven gives you the perks of a quicker cook time AND the crispy skin on the outside.

Step 2. Wash and poke the potatoes. Place the potato directly in the microwave and cook on high for 5 minutes.

Step 3. Using an oven mitt or towel (because the potato will be HOT), remove the potato.

Step 4. When it is just cool enough to handle, cover with olive oil and season with salt and pepper.

Step 5. Place potatoes directly on a baking rack or on a cookie sheet and bake for 10-20 minutes, or until a fork inserts easily into the middle of the potato.

Baked Potatoes in a Slow Cooker

Now THIS method deserves an award. You know how the potato comes out amazingly perfect in the oven? You can get the same results using the slow cooker!

Step 1. Wash and poke the potatoes. Season with salt and pepper (olive oil is optional).

Step 2. Wrap the potatoes in aluminum foil and place directly in the slow cooker.

Bonus! I love using my Instant Pot so much that I have a post dedicated to cooking baked potatoes in the Instant Pot. Here is the link to my recipe for Instant Pot Baked Potatoes, but for now, here’s how you do it:

Step 1. Preheat the oven to 425F. Wash and poke the potato and place in a ceramic or steel bowl.

Step 2. Measure two cups of water into the inner pot of the Instant Pot and place the bowl (with the potatoes) on top of the steam rack.

Step 3. Choose the “steam” program with 12 minutes time (or 15 minutes if you have massive potatoes weighing 1lb+ each).

Step 4. When the program is done, release the steam and take the potatoes out. Cover the potato with olive oil and place in the oven for 5 minutes to crisp the skin.

What temperature do I bake potatoes?

I bake potatoes in the oven at 425 degrees. Whole potatoes take 45-60 minutes, and halved potatoes bake for 35-40 minutes.

Should baked potatoes be wrapped in foil?

It really depends on your preference. Wrapping them in foil before baking is a perfect way to get soft skins, and fluffy centers. If you’d prefer crispy skins, rub your potatoes with olive oil and bake them unwrapped.

How long does it take to bake a potato at 450 degrees?

I usually bake my potatoes at 425, and it takes 45 minutes to an hour. So, baking at 450 will have your potatoes finished closer to the 45 minute mark rather than the hour.

Dinner on a Dime 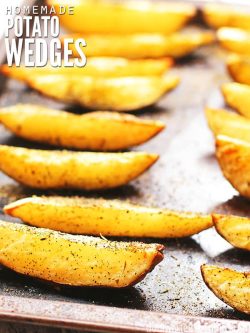 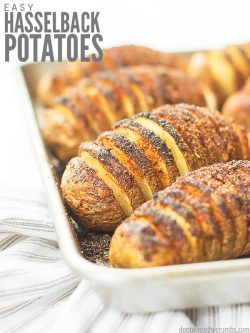 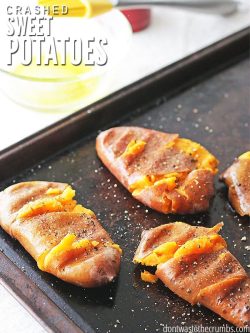