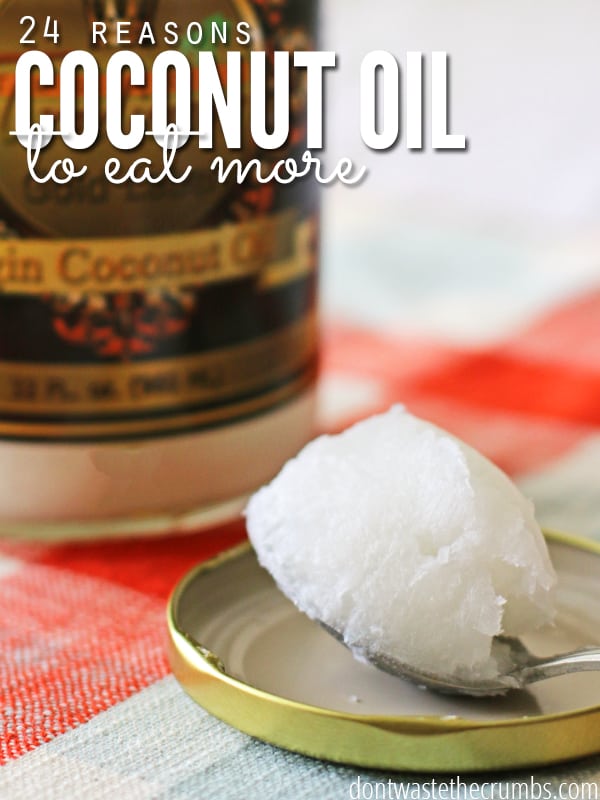 I don’t remember the exact day we started using coconut oil, but it was sometime between activities last summer.

What I do recall is reading on a deal blog about such-and-such brand of coconut oil on Amazon was a great price, the lowest she’d ever seen, and that “now” was an excellent time to stock up if we were interested…

The jars came in and at first I thought it was a mistake. Why was my oil a solid? That’s kinda weird… and why did I buy this again?

I wasn’t sure how to eat it. Do I just take a spoon to it? Melt it? Spread it on bread?

I tried it with a spoon, treating it like it was a small scoop of ice cream. My licks didn’t get me very far, which led me to taking a big bite.

Have you ever tried chewing tapioca pudding? It’s kinda like that, but thicker. A very strange texture in my mouth that I did not want to repeat.

Thankfully, I found great success with melting it and making seed salad, which is still one of my all time favorite ways of eating this awesome fat (besides baking with it, of course).

A few days later, my good friend Google clued me in that coconut oil was supposed to be solid. However, it wasn’t until I read Nourishing Traditions that I figured out why: it’s 92% saturated fat!

Remember that saturated fat is the good fat. It’s the type of fat that contains the strong bonds that are resistant to higher temperatures, making them safer to cook and bake with and less likely to attract free radicals.

There’s more to it though. Coconut oil isn’t just another fat that’s handy to have in the kitchen. Like butter, coconut oil is REALLY GOOD for you!

The Benefits of Coconut Oil

Anti-Microbial (It Fights the Bad Bugs)

Coconut oil is made up largely of a medium-chained fatty acid called lauric acid.  In the body, lauric acid is formed into monolaurin and the body uses monolaurin to destroy harmful bacteria.

Mary Enig, PhD (co-author of Nourishing Traditions) wrote a report in 2006 discussing the effects of coconut oil on Staphylococcus aureus, a major pathogen that was responsible for over one-third of fatal cases of  blood poisoning in the UK in 1999. This same pathogen just so happens to be resilient to penicillin, methicilliin, tetracycline and erythromycin. Any of those antibiotics sound familiar?

In studies published a few years later, coconut oil showed to be better at preventing and healing infections caused by this awful pathogen than the most potent antibiotic! (source) The only other source for large quantities of lauric acid is mother’s milk, which we’ve talked about before and most healthcare professionals will promote, is well known for building the immune systems of babies.

A different bacterium from the same family is Streptococcus mutans, normally found in the mouth and the guilty party for making an acid that decays teeth.

Researchers state that even a small amount of coconut oil would be beneficial in destroying this micro-organism! (source)

Although we prefer our homemade toothpaste that’s just like Earthpaste, if you want to try one made with coconut oil, Nourishing Simplicity has a recipe here.

It sounds strange to say fight yeast with an oil, but it’s true! The lauric acid in coconut oil literally kills athlete’s foot, ringworm and Candida albicans (the normal fungus that lives in our gut, yet its out of control overgrowth results in thrush in babies and yeast infections in ladies).

I thought Whole Intentions was kidding when she posted about fighting Candida with ice cream, but she’s completely serious! Candida Diet vanilla ice cream (which also happens to be gluten-free, nut-free, sugar-free AND low-carb) only has five ingredients and looks really easy to make. Plus, I’m guessing you can substitute vanilla extract with other flavors too! Lemon, peppermint, orange… Mmm!

In addition to lauric acid, coconut oil also contains a small – yet significant – portion of capric acid. When ingested, capric acid forms monocaprin in the body and helps fight off viruses such as HIV and herpes.

Researchers are already studying whether or not coconut oil will promote healing of some of other major diseases like measles and hepatitis C. Food healing disease? Say it isn’t so! 😉 (source)

This sounds completely absurd, right? That eating fat can cause you to lose fat? It just reiterates how misinformed we are as a society!

Medium-chain fatty acids, like lauric acid found in coconut oil, don’t need to be “broken down” by our digestive system. Instead they’re absorbed directly into the liver and converted to energy that our body uses immediately.

This quick release of energy causes our metabolism rate to increase an average of 48%! Coconut oil also slows down the rate at which we digest food, making us feel fuller, longer. Because of the slower digestion, coconut oil helps stabilize blood sugar levels too! (source)

This reason alone may cause me to use Whole New Mom’s recipe for homemade chocolate chips.

Sure did! Does it sound like an oxymoron to fight off sugar cravings with chocolate? I’ll take that benefit of coconut oil any day.

Goes Beyond the Kitchen

There are only a few foods in my kitchen that I’m willing to use beyond my dinner plate. Let’s be honest, you’ll NEVER find me putting mayonnaise in my hair. Maybe because mayo is made of eggs and the idea of purposely putting eggs in my hair kinda grosses me out. However, I am seriously tempted to keep a jar of coconut oil in my bathroom.

Coconut oil relieves dandruff and can be used in place of lotion to condition skin. Actually, the naturally occurring anti-oxidants in coconut oil make it the perfect anti-aging moisturizer. Which makes coconut oil a big part of my simple morning routine!

All its “anti-” properties make it perfect for to use on cuts, scrapes, and burns.

Remember that coconut oil has a high smoke point, making it ideal for frying and for baking. It’s interchangeable with butter in most baking recipes, especially these ultimate chocolate chip cookies (remember to add the different types of chocolate!). I also prefer it for homemade tortillas and a great addition to daily smoothies (with more recipes here too).

Ways to incorporate more coconut oil in your diet

The easiest way to eat more coconut oil is to substitute it for up to half of the butter in any baking recipe. Cookies are especially amazing, but cakes, brownies, pie crusts and fudge are equally as delicious.

As long as the total fat remains the same, the recipe will be fine.  You can tinker with the ratios to suit your personal preferences, but you won’t go wrong with a 1:1 ratio of butter and coconut oil.

Here are a few delicious recipes:

Plus these natural skincare recipes use coconut oil too:

Would you like to read more about the benefits of coconut oil? The Coconut Oil Miracle is one of the most comprehensive books on the topic. A must-read if you’re looking to take care of you body naturally!

How do you benefit from coconut oil? 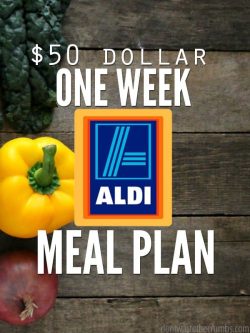 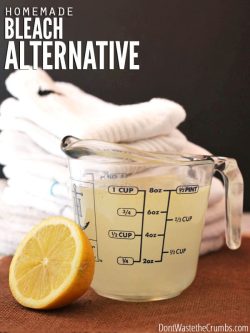 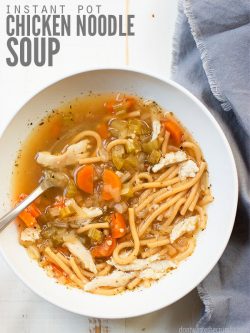 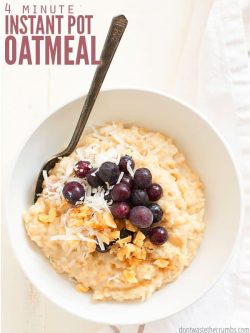