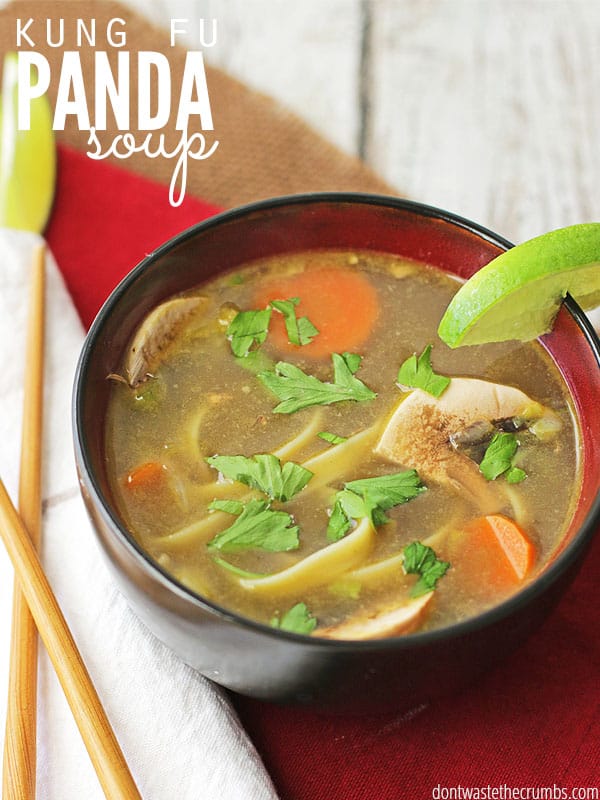 My family, on the other hand… not so much.

To them, there’s no difference between Potato & Corn Chowder and Minestrone. Other than the noodles, of course.

“It’s just soup,” they tell me. Bleh.
And they much prefer to have the same soup over and over again. They’ll take Tomato Basil Soup ANY day of the week. In fact, I was sick earlier this year and Mr. Crumbs and the kids made dinner for me.

We had Tomato Basil Soup and grilled cheese (made with Man Bread, of course) for a whole week! I’m still not sure if I’m ready to have tomato soup again…

Personally, I like variety. My inner adventurous eater NEEDS variety.

I’m talking about BOLD flavors so it doesn’t feel like I’m eating a bowl of boring vegetables in chicken stock.

Which is fine every now and then, but not every week.

Tortilla Soup is a good example of what I’m talking about. It’s spicy and filling all on its own, but when you add sour cream, cheese, crushed tortilla chips and cilantro (which, you really should add ALL of them), it’s a big bowl of hearty deliciousness that I can’t help but have seconds of.

That’s what Kung Fu Panda Soup is. Something bold, different and definitely not like most other soups on our menu.

Even the name is different. “Kung Fu Panda Soup”… I mean, how fun does THAT sound?!

High five if you just said the name of the soup out loud! 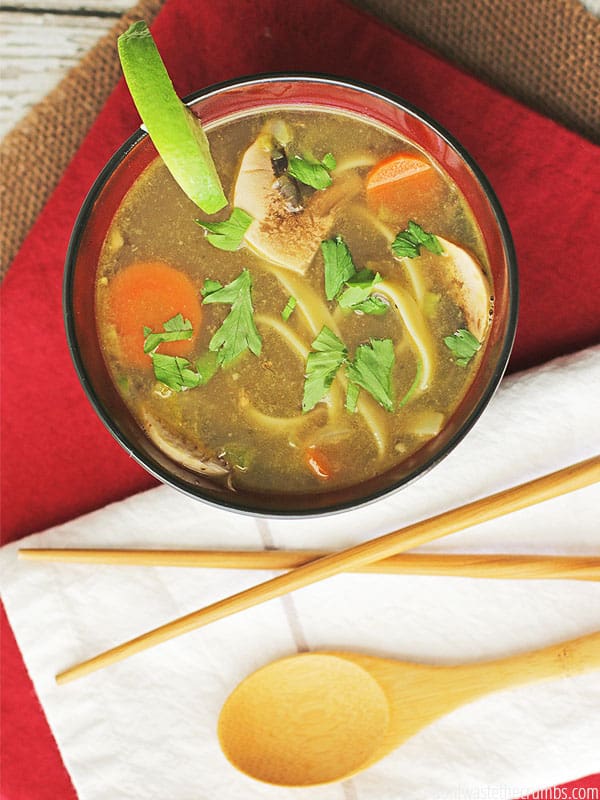 I do have a confession though – I tend to do something sneaky with soup.

I add ingredients that I know my family doesn’t like.

I know, bad mom, but I do it for good reason: THEY EAT THEM ANYWAY.

Like beans. Put a bowl of them at the table and they’ll be untouched. But make a pot of Northern Beans & Ham Soup or Red Lentil Vegetable Soup and no one says a thing while they scarf down dinner.

I’ve done the same thing with all sorts of ingredients, and I did it again with mushroom and cabbage in Kung Fu Panda Soup and you know what? 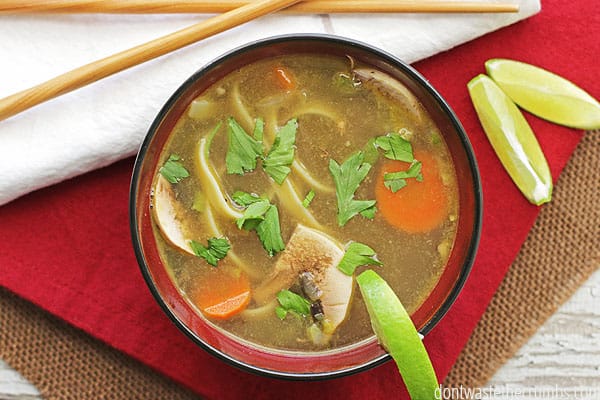 For me, Kung Fu Panda Soup is a little bit like Tortilla Soup in that I like to add all the optional toppings… cilantro, green onion AND a squeeze of lime wedges.

My kids like it plain, and Mr. Crumbs likes it with extra salt and pepper.

What matters in the end is that they’re eating wholesome foods and being exposed to foods they supposedly don’t like.

I say supposedly because even though they “don’t like mushrooms,” they still eat the soup!

Hey, if making Kung Fu Panda Soup is the only way my kids will eat mushrooms and cabbage for a season in life, I’ll just keep on making soup!

I first made this recipe with homemade chicken stock and then tried it again with water. I thought the flavor of the stock was overpowering in the soup, so I preferred the water instead. A mild vegetable stock might work okay, but I recommend trying it with just water the first time so you can gauge the intended flavor of the soup.

Fresh ginger really shines in this recipe, but dried can work if you’re absolutely in a pinch. Use 1-2 teaspoons, to taste. (One trick to keep fresh ginger readily available is to freeze it! Find out how in this tutorial.)

I’ve made this recipe with both sugar and honey and didn’t have a preference either way. Feel free to use either one!

One last tip – since you probably can’t get jut 2 ounces of mushrooms, I recommend pairing this soup with Autumn Rice Pilaf on your weekly meal plan. If you still have some left, make risotto or caramelize them with onions for a simple chicken cheesesteak sandwich!

Total cost for Kung Fu Panda Soup (which makes enough for a meal, and likely a bowl for lunch too) is $2.08!

Are you wondering why this recipe is so cheap? The answer is easy: because we’re using seasonal produce. Cabbage is super cheap in the winter, and staple veggies like onions, carrots, celery and mushrooms are affordable year-round. As you can see, eating seasonal really does save money!