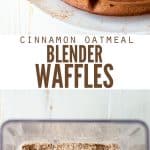 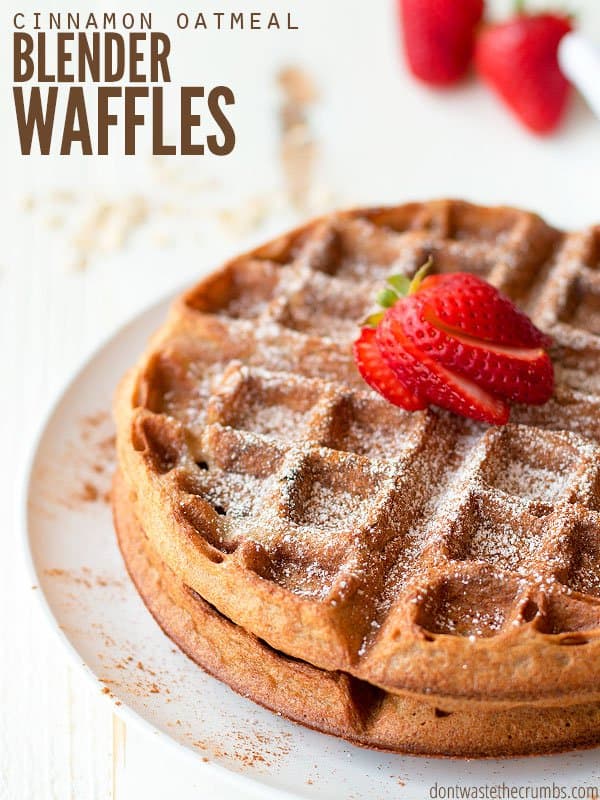 My husband has a not-so-secret secret love affair with this waffle recipe.

Actually, his love for waffles was kept secret for awhile. I’m thinking he didn’t want me to see how he must have both butter and syrup in every square hole of the waffle. That I might think he was a bit OCD about his meticulous smearing and pouring.

Well, I do think that, but we’ve been married nearly 11 years so far and if his only weird tendency is to love butter and syrup and this waffle recipe, I say things are going pretty well.

Especially considering that this waffle recipe is made with oatmeal.

SHUT THE FRONT DOOR, yes these are cinnamon oatmeal waffles and they are gloriously delicious, ridiculously easy and the official breakfast for all Saturdays from now until eternity.

Or at least until we run out of syrup. 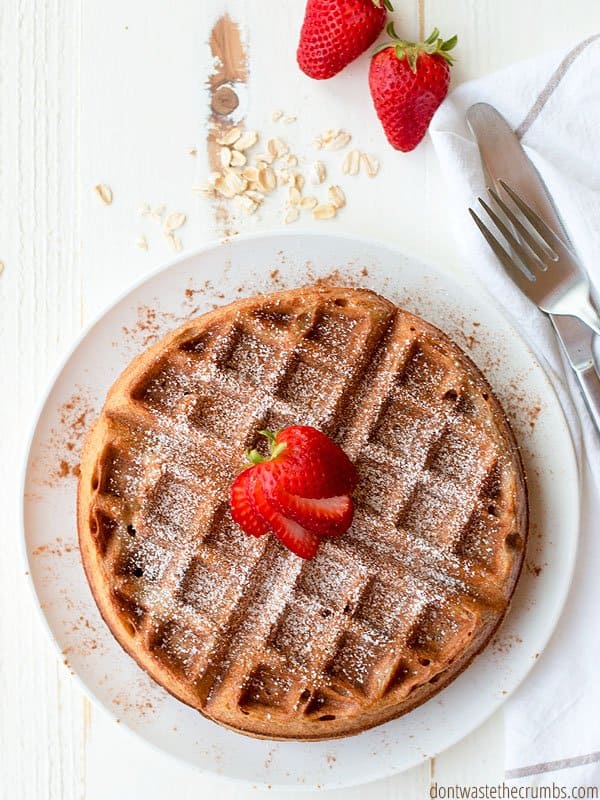 According to my husband waffles are one of those things that you either do right, or do terribly wrong. For him, the right waffle is:

If a waffle isn’t ALL of these things, then it’s wrong. Just like that. There is no in between.

But in order to find a waffle recipe that meets all four criteria, I had to do some serious research.

Which meant I had to make a lot of waffles.

In all my research, I learned that there are two main criteria for a good waffle:

Butter is what makes the waffle crispy and fluffy. If you skimp on the butter, your waffle will taste “okay,” but it won’t be great. It also won’t be nearly as good leftover, even if you do toast it.

I use only butter (no substitutes) when I make this recipe as-is. Because butter is so amazingly good and good for you. More often though, I double the recipe (an easy way to work smarter, not harder) and will use half butter half coconut oil.

I don’t think that’s the proper way to make a waffle, but they come out crazy good so I’m just going to keep doing what I’ve been doing.

My daughter received a Frozen-themed waffle maker for Christmas and because that’s what we had, it’s what we used. However, making waffles for the family took FOREVER and they just came out okay.

After realizing my husband’s love affair with this waffle recipe, I invested in a double waffle maker identical to this one, except I got mine at Walmart for half the price.

It makes AMAZING waffles with deep pockets AND it cut the time to make waffles in half. Can’t recommend it enough! 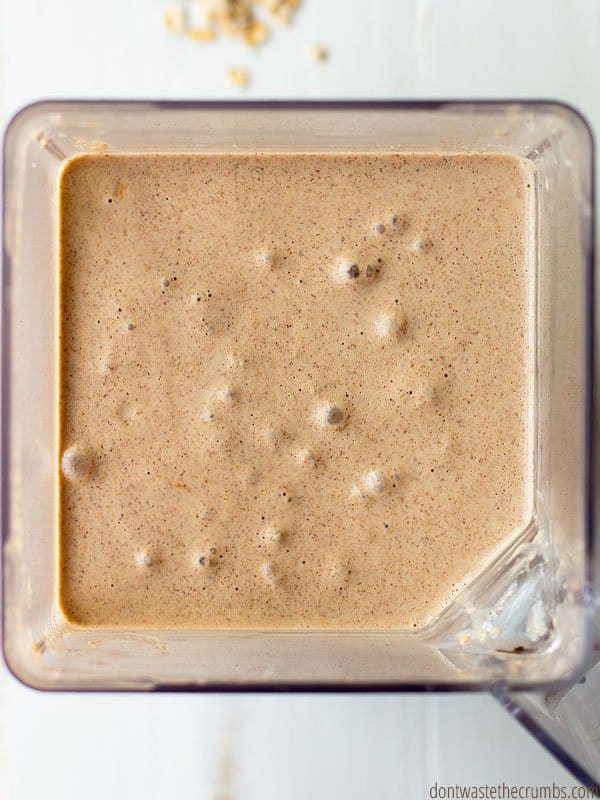 Let’s break this cinnamon oatmeal waffle recipe down a bit and discuss the main players:

Flour: We’re using oat flour in this recipe because oats are super healthy for you and crazy cheap. I use rolled oats because it’s what I have, but I won’t judge you if you have quick oats. It’s going in the blender and getting pulverized into oat flour anyway.

Sweetener: Every recipe I’ve found says to add sugar, but since I’m trying to keep this a healthy recipe, I switched to maple syrup and reduced the amount used. I also added molasses because I love the depth of flavor, but both can be omitted without seriously changing the flavor of the waffle.

Fat: As I said before, we’re using butter here. Feel free to go 50/50 with coconut oil if you double the recipe. I have NOT tried halving the butter and subbing with coconut oil in the waffle recipe as written below, but I don’t know why it wouldn’t be good.

Eggs: Eggs are a binder here, but I think they contribute to the crispiness of the waffle too. If you substitute this out with other binder options like pumpkin, banana, flax-egg, etc., the waffle won’t be as crispy. Still good flavor though.

Cinnamon: YES! The fact that this waffle recipe contains 2 teaspoons of cinnamon is not a typo. Yes, that’s a lot of cinnamon and yes you can taste it. That’s because this is a CINNAMON oatmeal waffle recipe. If you don’t like cinnamon, omit it, but you might want to add in something else for flavor because this spice is the star of the show. 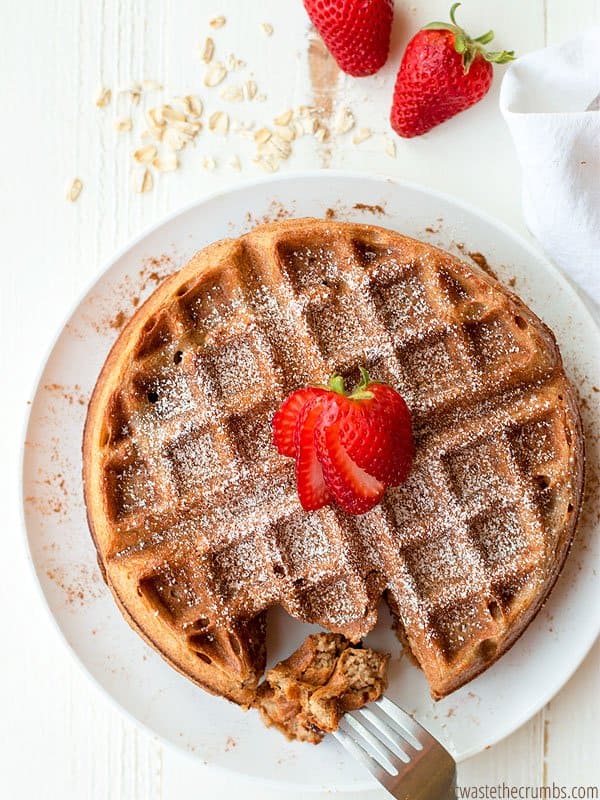 How to Freeze Waffles

If you want your waffles to stick together, go with method #2.

If you want to easily pull out one waffle at a time without feeling like you’re peeling two bricks apart, then go with method #1.

Another option is to place a piece of parchment or wax paper between each waffle and freeze in a stack. I haven’t tried this method myself because both parchment paper and wax paper are pricy (in my opinion), so I go with method #1. It’s the cheapest and it works.

Batch cooking and Freezing are some of my tricks to getting breakfast (or dinner!) on the table fast. Check out my free course, 5 Days to Getting Dinner on the Table, FAST, for more ideas to feed your family real food FAST!

A toaster is a great way to re-heat frozen waffles, assuming your toaster is large enough. You might have to break the whole waffle into halves or quarters so it fits.

We don’t have a toaster, so we re-heat in the oven. I place frozen waffles directly on a rack in the middle of the oven and turn the oven to 350F. By the time our oven preheats, the waffle is ready.

Note: My oven takes an eternity to preheat, so the waffle is in there for a good 10-15 minutes. Your oven probably preheats faster, so the first time you re-heat a waffle, use a timer and check on it every 5 minutes or so. Once you know how fast (or long) it takes, you can set the timer for the total time the next time you re-heat.

Print
Serves: 4-5 waffles
Ingredients
Instructions
Notes
* Make sure you lid is on tight and blend on high so that the tiny specks of oat flour incorporate well with the liquids and absorb them. If the oat flour is too large, it will not absorb the liquid properly and your batter could be runny.
** My waffle iron came with a scoop that is just the right amount of batter for the waffle iron. The Frozen-themed waffle iron did not, and it used ¼ cup batter for each waffle. Every waffle maker is different, but if I had to guess, I'd say use ½ to ¾ cup batter. Remember that this batter is thick and will not spread to the edges of the iron, so be sure to use a spatula to get the batter to the edges.
*** Some have stated that this batter is too thin. When you follow the recipe as written, the batter should *just* run off a spatula when dipped in and pulled out of the batter. If it is very runny, add ¼ cup oats and re-blend until it reaches this thickness.
3.5.3226

Do you have a secret love affair with waffles? Do you have a favorite flavor or topping? Or are you a butter and syrup purist too?