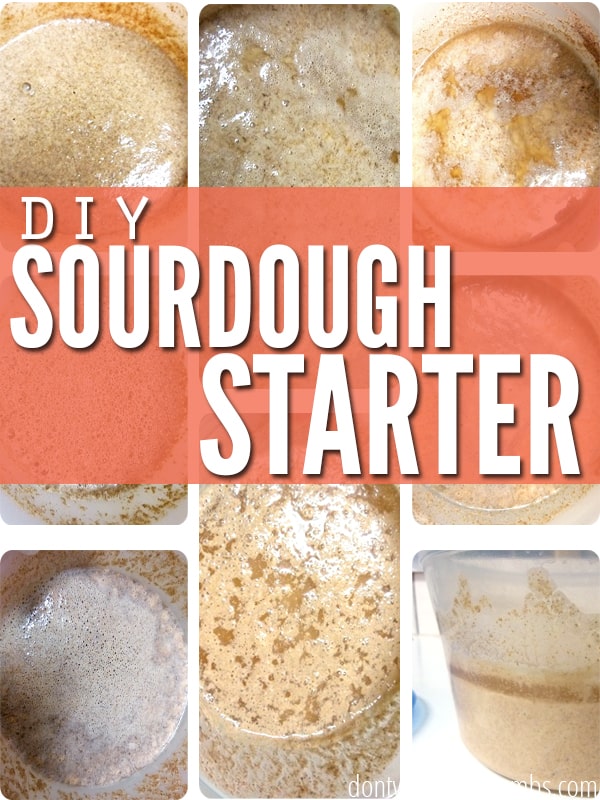 My adventures in sourdough began a few years ago when my sister gave me a really awesome cookbook for Christmas.  It’s filled with make-your-belly happy “home-style” food, but with an underlying healthy, organic-like theme.  Right up my alley, right?

One of the recipes inside was for sourdough starter.  I had no interest in making my own bread at the time (this was BEFORE I read labels, but having a newborn and a 21 month old didn’t help the cause), but the author had captured my interest when she introduced the idea with this:

There’s something in the air… at least that’s what you hope when you embark on the wild adventure of making a sourdough starter.  You will need patience, but you won’t need special tools or expensive ingredients.  The end reward is something you can eat warm from the oven, slathered with sweet, creamy butter  ~ “Family Meals,” by Maria Helm Sinskey

Adventure?  Inexpensive ingredients?  Count me in!

I followed the recipe exactly, but my starter didn’t um, start.  I blamed it on the climate.  It’s a mild 68 degrees nearly year-round here in central California.  Not exactly “warm” and inviting to the yeast that floats around in the air.

I gave up on sourdough.  What was the point of adding more flour and more water if there were no bubbles and no confirmed life in my jar?

Yet, nagging the back of my mind I still wanted to try sourdough bread. It has probiotic properties similar to yogurt and kefir. Which can only be good for my health.

Fast forward to when I got a freebie from Cultures for Health. Since I’ve nearly mastered homemade yogurt with my fail-proof heating pad method and have failed miserably at creating a sourdough starter, my choice was obvious. I chose the sourdough starter.

I ordered my starter kit, the San Francisco variety since we’re so close to the big city and it seems to be the variety that produces the tang that everyone’s taste buds remember.  At the same time, I read the recipe in Nourishing Traditions for a sourdough starter from scratch.  I started both batches on the same day, thinking if I’m “feeding” one, I might as well feed two.

The starter from Cultures for Health took as long as it said it would – 3 days.  Easy, peasy, done.

The Nourishing Traditions method, using only rye flour and water, took 7 days.  Although it took longer, it was no more labor intensive or difficult than using the starter kit.  And here’s the best part:  despite the same 68 degrees outside, Sally Fallon’s method was a success.

If you’re challenged in the sourdough department or live in a very cold climate, you may want to skip the heartache and go straight for a starter kit.  The cost is reasonable, especially since you shouldn’t have to ever pay for a starter again (unless you kill it).  I’ve read of families using starters originally from generations ago!

If you’re looking for more of an adventure, try making your own from scratch.  It’s just as rewarding as the starter kit, perhaps more so since you “captured” the yeast from the air.  I’m telling you, the “creating something from nothing” idea is pretty neat!

How to Make a Sourdough Starter

Be sure to read the entire tutorial and tips through before starting your sourdough.

Place the bowl in a warm area where it can sit undisturbed.  This could be outside on a patio, on a kitchen counter or in a pantry cabinet.

Every day, for the next seven days, at approximately the same time, feed the starter 1/2 cup of rye flour and 1/2 cup water.  Stir, re-cover and allow to sit.  Repeat.

The starter will go through a bubbly and frothy stage and eventually subside.  The starter will smell like yeast and/or wine, but the smell should always be pleasant.  If the starter ever smells sour or rancid, it has been contaminated and should be thrown away.

Day 1
One big bubble and a few smaller ones – both signs that the starter is headed in the right direction.  If yours doesn’t have bubbles after the first day, have no fear.  Sometimes it takes a few days before you see any sign of life.  Keep feeding the starter as directed. 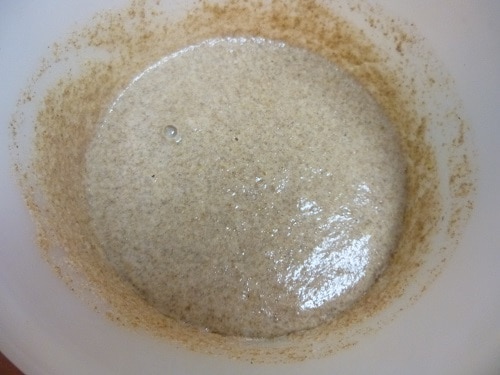 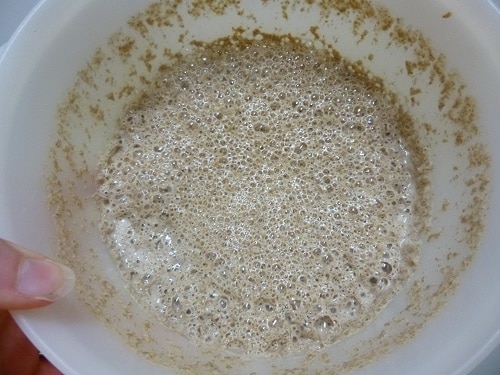 Day 3
The bubbles have subsided and it’s more “frothy.”
It smells distinctly sweet – the smell of natural yeast. 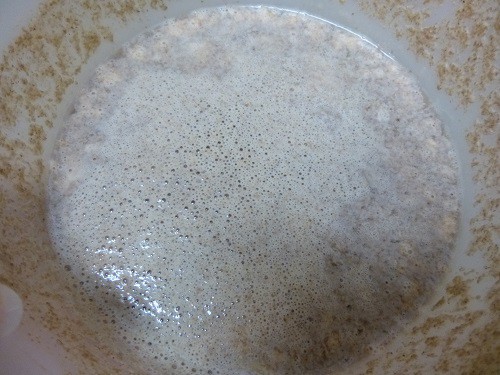 Day 4
The frothy stage is nearly over and there’s a small layer of liquid gather at the top – another good sign.  This is when you’d want to pour it off if before feeding the starter (see tips below).  If the liquid isn’t separated enough to easily pour it off, just mix it up into the starter before you feed it. 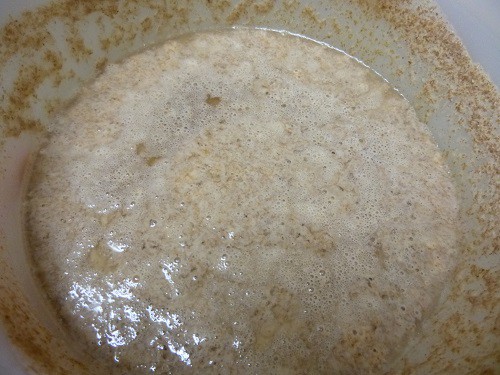 Day 5
Frothy stage is over and there’s even more liquid than before.  The sweet smell is still there, yet more pungent, similar to the smell of wine. 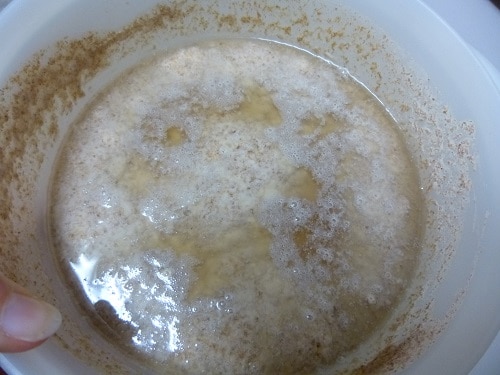 Day 6
Lots of liquid and a thin consistent layer of foam on top.  Almost there! 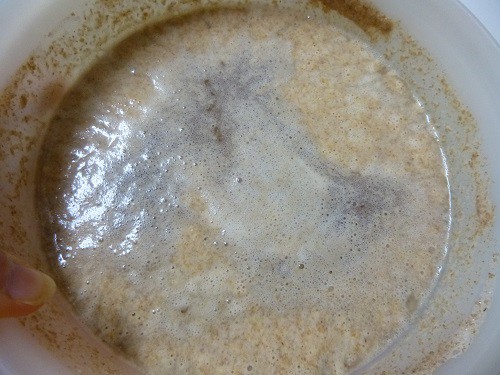 Day 7
Done!  Liquid on top, intermittent foam.  At this point the liquid could be poured off and the starter would be suitable to make bread. 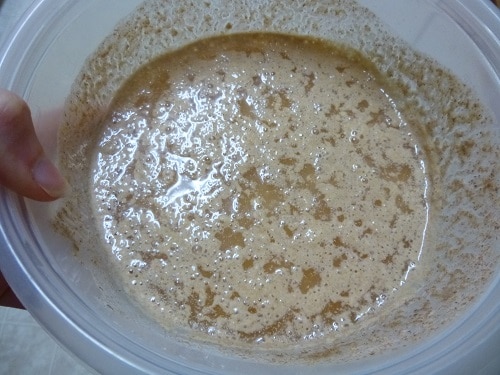 Day 7, Side View
A side shot of the liquid that forms at the top of the starter. 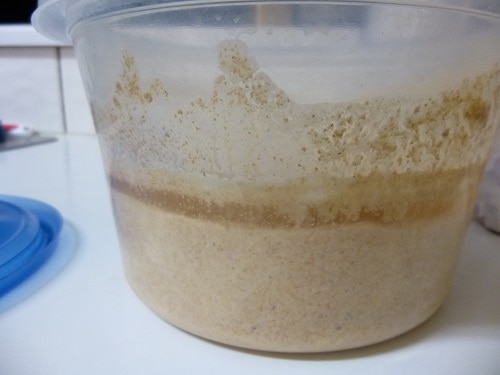 Once the starter is officially created, it enters maintenance mode.  The frequency of feedings is determined by how much starter you need and how often you plan to use it.

However frequent or infrequent you decide to feed your starter, the yeast thrives best when it’s fed regularly and consistently.  Choose your time frame and quantity and stick with it as best as you can.

Prepping the Fridge Starter for Baking

Yeast grows incredibly slow at refrigeration temperatures, which is why you can get away with feeding it only once a week.  In order for the yeast to successfully leaven a batch of bread, it must be “revived” so to say.  The steps are below, along with an example to help you better understand the time frame involved.

With the time involved in “reviving” refrigerated sourdough, it’s often easier to keep the starter at room temperature and reduce the feedings to only a tablespoon or two daily.  You’ll have to choose what will work better for you and your bread making routine.

The best flours for sourdough are white, whole wheat, spelt and rye.  While rye is recommended when you’re first starting, you can easily switch to a different flour once the starter has gone through the first seven days.

Wondering if you can throw in leftover dough scraps?  That’s the easiest way to not waste food, but it doesn’t come highly recommended.  Dough tends to have other ingredients too, like salt, eggs, butter, etc. and that wouldn’t be a good environment for your starter.  Instead freeze your dough scraps and when you have enough, fry them up and coat them in cinnamon sugar for a homemade version of donuts.

What do you think –  is a sourdough starter something you can do?  Let us know your thoughts in the comments! 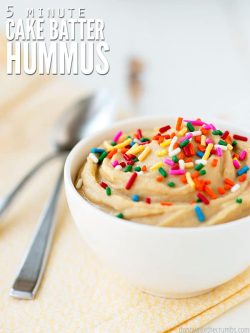 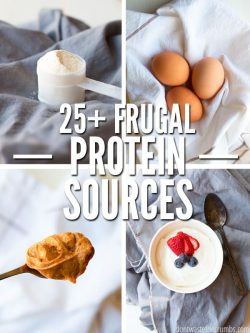 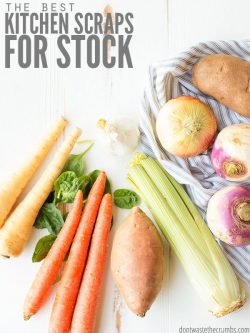 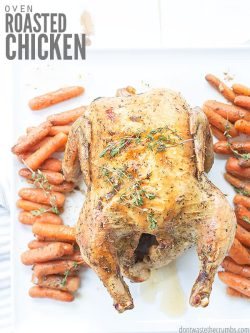