My grocery budget for our family of 4 is $330 each month. This real food budget includes food, toiletries, household items as well as health & beauty products. It also includes EVERY meal, not just dinner. This post is our monthly budget accountability session, where we share what we spent on food for July 2015. You can read previous Counting Crumbs reports HERE.

I’ve been doing these budget accountability sessions for about… oh, FOREVER (aka 2 years), and I’ve learned two very important lessons along the way.

Take last month for example. I thought I had planned well, but forgetting about the weekly CSA box nearly emptied the grocery budget on day 2.

Thankfully, the tally sheet was wiped clean for July and I got to start all over again… only this time learning from my mistakes in June.

First off, I calculated how many CSA boxes we’d get this month (5) and took that total off the top. So instead of my brain thinking I had a $330 budget, I told myself it was only $222. I tell you folks, the mindset is half the battle!

At the start of the month, I knew we’d have company coming in town (which meant lots of eating elsewhere) and an influx of produce towards the end of the month (which meant no need for produce at that time). So I tried to plan accordingly by not really splurging on any “fun” stuff, since we likely wouldn’t have time to eat it anyway. I did my best to stick to the basics and use my money-saving shopping strategy, that way we could still pull together a meal regardless of what was going on in our schedule.

I found a few great deals along the way, which made for some really great savings in the long run.

Without further ado, here’s what we spent on food for July 2015! 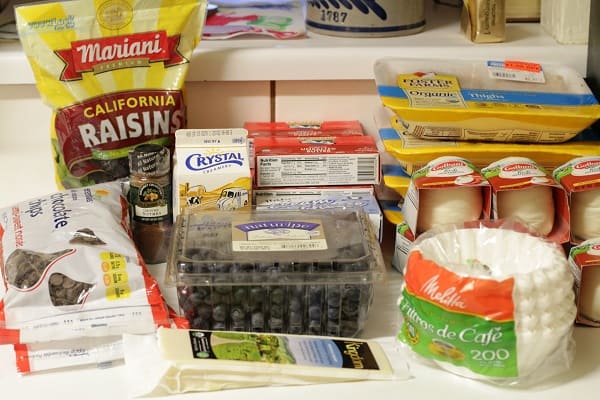 Oh my goodness, I hit the mother-load. There was all sorts of organic chicken marked down PLUS fresh mozzarella at a price that is cheaper than the cheapest I’ve ever seen at Costco!

I bought all the marked down chicken they had, plus enough fresh mozzarella to cover a month’s worth of pizza, plus a couple extra for caprese salads and a pizza night with company.

I thought the organic sharp cheddar cheese was a good deal at the time, but I did the math when I got home and it wasn’t any cheaper than what I pay at Costco per pound… it’s just that the package was smaller at Grocery Outlet. Doh!

Raisins for snacking and chocolate chips for baking (realized I already had some at home, hidden in the back, when I unpacked these too, double doh!). The butter was a slightly better price than Costco’s organic butter, so I went ahead and bought enough to last the month.

A friend requested that I make strawberry pretzel salad for the Fourth of July, but I couldn’t buy Cool Whip and typical Jell-O in good conscious. I found a real food version of the same recipe and that’s what I needed the heavy whipping cream and cream cheese for.

The blueberries were impulse. We hadn’t bought any so far this year and I was afraid we’d miss out! 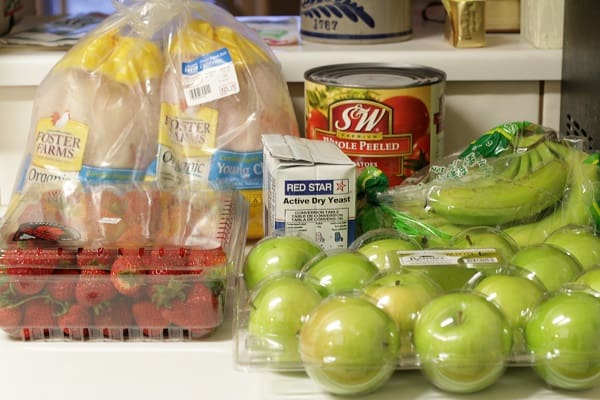 Lots of staples in this trip… yeast, chickens, onions, salt and mineral water. Carrots, bananas and apples help to supplement the CSA box when we’re not sure what to do what what we got or aren’t big fans of it (like fennel). Peaches were impulse too, for the same reason as the blueberries above!

I’m not sure what the “organic ms” is, but my best guess is that it’s coffee.

I had an “aha!” moment while shopping this time… I saw a big can of whole peeled tomatoes for less than $3. This is the same type of tomato we use for our homemade pizza sauce, but I pay about $2 for a small can at Savemart almost every week.

Then it dawned on me that I could by the big can, divvy it up and freeze in small portions for future pizza nights and save. So I did! We’ve used only one portion so far, meaning we have three nights worth of pizza sauce ready to be pureed in the freezer. My grocery bill was just slashed by over $5! 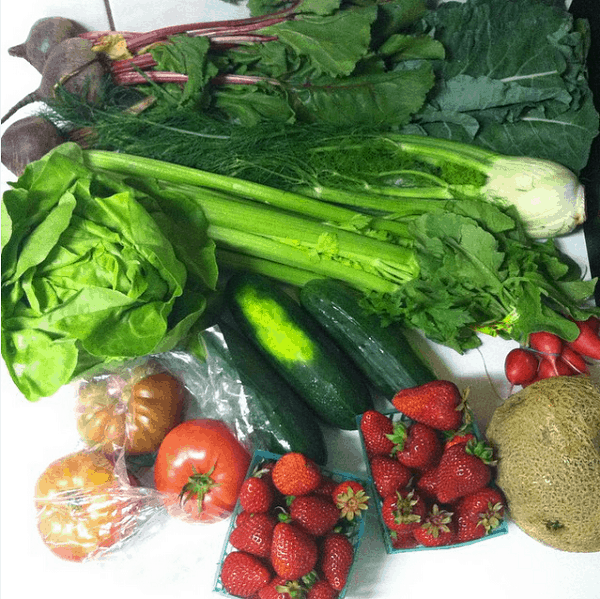 We ate lots of salads from this box, plus used the tomatoes for pizza and the broccoli leaves in this savory pasta dish.

I struggled with the fennel, but ended up caramelizing it with onions and cabbage and was definitely pleased with how it turned out. I don’t think I’ll ever go out of my way to buy fennel, but if we get it in the box again, at least I’ll know what to do with it!

Pretzels for the strawberry pretzel salad I mentioned earlier, plus vinegar and eggs to replenish the pantry. The eggs were quite expensive everywhere I looked… Not sure how I feel about that.

Pepperoni for pizza, milk for coffee (we stopped drinking coffee creamer ages ago). 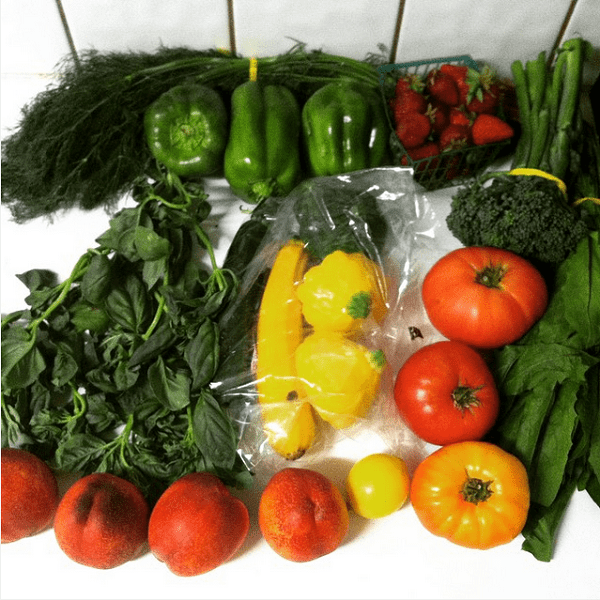 I used the lemon in homemade mayo, we ate the broccoli with dinner and ended up slicing and freezing the bell peppers for later. I dehydrated the dill, made zucchini muffins with the squash and everything else became salad.

Um… I don’t know? LOL – we were SO incredibly busy this week with company in town, I didn’t even have a chance to snap a picture. We usually get a leaflet with a list of items included, but I can’t seem to find that either!!

Off the top of my head (and based on what’s left in the fridge) we got eggplant, yellow squash, romaine, green leaf lettuce and parsley for sure. Whatever else we got must have been good because it’s not in the kitchen anymore!

The onions I bought just a couple weeks earlier had begun to mold, so I took them back for a refund!

Knowing we’d get an influx of produce, I bought juice and yogurt to make smoothies.

I was here for something else and found two packages of pepperoni, each containing a full pound for just $3.99 each! I picked up two, knowing we’d go through it. Finding a better deal on pepperoni has been on my radar the past couple months, so this was right up my alley. 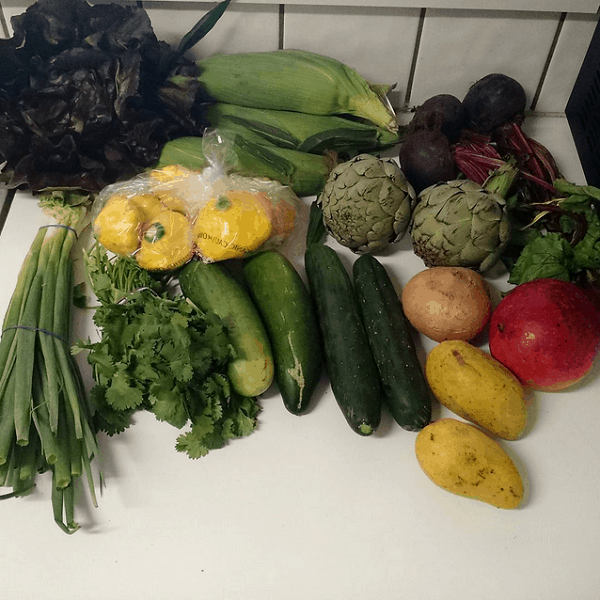 The corn is SO GOOD! We’ve enjoyed that plain (boiled), cucumbers in smoothies and made a rockin’ salsa with the jicama, cilantro and mangos (thank you to readers on Facebook for the suggestion!).

I also made more muffins with the squash and salads with the lettuce. 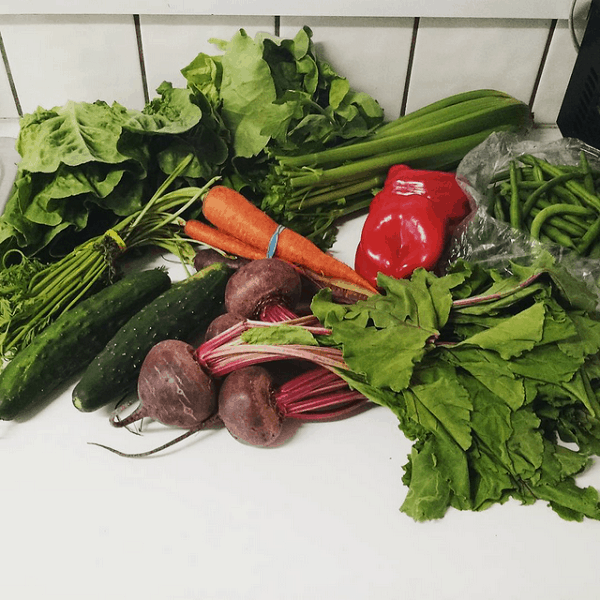 We haven’t had a chance to do too much with this, since we picked it up just a few days ago, but the figs, tomatoes and strawberries are happily in our bellies. We’ll make salads for sure, probably a stir-fry and more carrot top pesto.

I bought these items off Amazon and used Swagbucks to pay for it. If I didn’t have Swagbucks, I would have bought the pepper at Grocery Outlet, skipped the cashews, bought contact solution from Costco, maybe skipped the wheat and paid out of pocket for the Redmond Clay.

Want to learn more about Swagbucks? Get the scoop in this post.

This helps to off-set the over-spending from last month for sure, and it’s no doubt that the excess produce at the end of the month helped greatly. Mr. Crumbs and I committed to a vegetarian diet that week, making it a goal to eat as much of the fresh produce as we could while preserving as much as we could, while wasting as little as possible. That meant that much of the staples we have on hand weren’t even touched that week.

Going into August, we’ll have a whole chicken in the freezer and lots of dehydrated fruit for snacks. The kids start school, so we’ll see how how THAT plays into the budget! 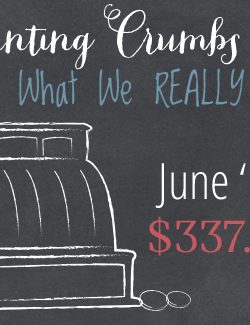