Navigation
You are here: Don't Waste The Crumbs » Real Food 101 » What is Enriched Flour? 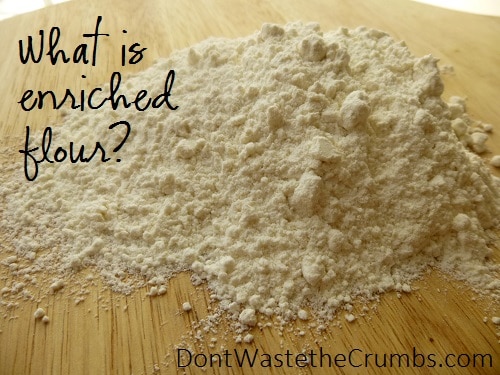 We know unrefined grains are better for us.  We know that flour from unrefined grains is made from the WHOLE grain, not just a portion of it, so all of the original nutrition is still intact.

We also know that making 100% whole wheat flour or spelt flour or kamut flour (or any other grain flour) is pretty easy:  grind the berry.  Making white flour?  Not so easy.

As if worrying about the first seventeen steps wasn’t enough, steps numbers 18 and 20 in the flour making process should especially concern us.  That’s where our lack-of-nutrition flour is bleached and enriched. 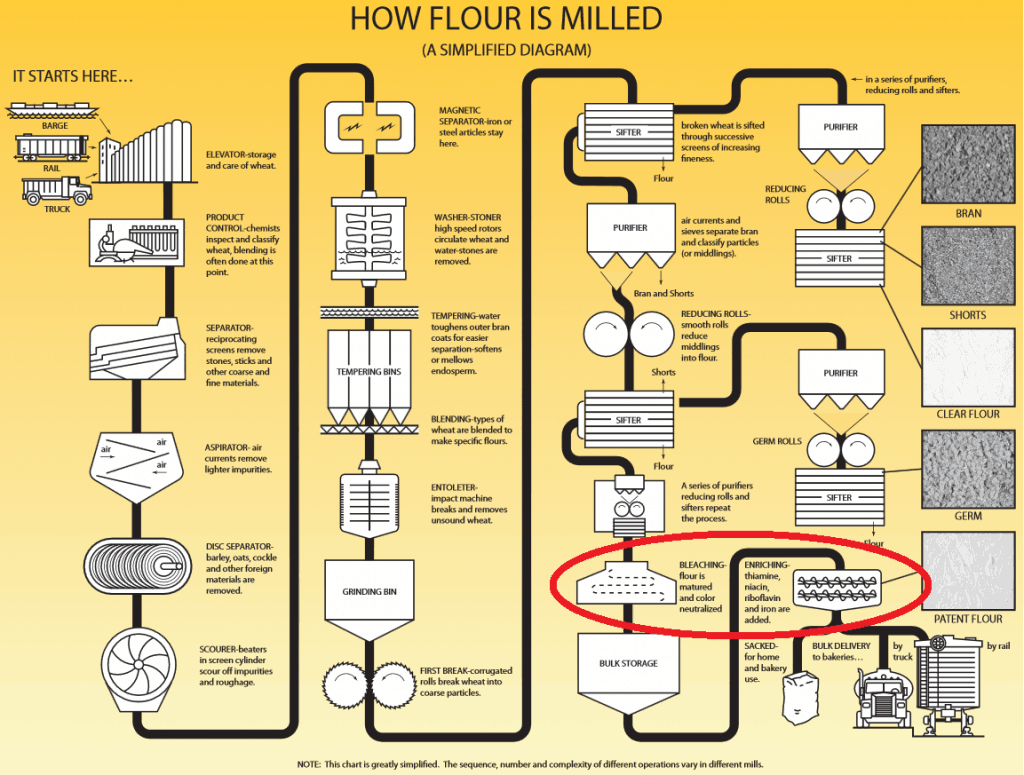 Does white flour contain bleach?  What is flour “enriched” with?  Is “enriched” any different from “fortified?”  And isn’t there bromated flour too?

Oh my my, those are some serious questions.  We’re still in the re-education phase of Candid Carbs, so let’s put our scientist hats back on and figure these questions out.  We should know what we’re eating!

What is Enriched Flour?

There’s three parts to a wheat berry, right?  White flour is made only from the endosperm portion (where all the starch is), leaving the two parts of the wheat berry that contain the most nutrients (the germ and the bran) to be tossed aside and considered “health food” for the crunchy/granola tree-huggers (which you all are, by the way, since you’re trying to eat real food 😉 ).

White flour was originally manufactured using large stones, but the resulting brownish/yellowish flour wasn’t appealing in color nor texture.  Apparently no one wanted to bake with ugly flour…

New manufacturing techniques were introduced in the late 1800s that improved both the appearance and texture of white flour, but then doctors and nutritionists became concerned that the newer methods were removing more of the nutrition from the flour that the old methods.  Their concern sparked a movement towards improving the nutritional quality of white flour and after many studies (and many years) they finally came to conclusion in the early 1940s to enrich white flour by adding thiamine, riboflavin, niacin (three of the B vitamins), iron, calcium and vitamin D.  (source)  That’s now federal law, by the way.

While their attempt may have been with good intentions, you know as well as I do that vitamins do not exist stand-alone in nature.  They’re hard-coded into the DNA of plant-based and animal-based foods.  The abundance of beta carotene (vitamin A) is what makes carrots orange.  A group of antioxidants called anthocyanins make blueberries blue.  Ya’ll know what I’m talking about, right?

If brownish/yellow flour wasn’t considered “appealing,” I highly doubt orange or blue flour would be either.  The only way to enrich white flour without compromising the lovely soft and pale appearance is to use an alternate source – a chemistry lab.  Synthetic vitamins are first created by scientists and then added back into white flour just before it’s packaged and sent off for delivery.

The Draw-Backs of Enrichment

The enrichment process sounds good on paper – the vitamins were once lost, so let’s add them back in!

But of course it’s not that simple.

When the milling process removed those nutrients above from flour, a whole bunch of other vitamins and minerals were removed too… but they’re not added back in during enrichment.  Fiber, protein, vitamin E, vitamin B6 are a the big ones that we’ve all heard of.  Lesser known trace minerals like potassium, zinc, copper, manganese and selenium are also removed and remain unaccounted for in white flour.  Every single one of those vitamins and minerals are essential for our bodies to function well.

Besides missing several key nutrients of the original wheat berry, manufacturers don’t necessarily enrich white flour with the same ratio of nutrients that are found in the original grain.  Iron is added in excess, which can cause tissue damage to the liver over time.  B vitamins are all meant to work together, yet adding only a select few back into the flour can cause imbalances in the body processes that require those B vitamins, like metabolism, nerve function and hormone production and regulation.

On the opposite end of the spectrum, consumers thinking that they’re getting more nutrients than they really are could be mis-led when making other health related decisions.

Oh yeah, did I mention that synthetic vitamins aren’t real?  And the body knows it.  The body can easily process vitamins found from real sources, like plants, oils and animals.  But the body needs help with the synthetic forms of those same vitamins.  Take for example folic acid.  Enzymes in the intestines convert folic acid into usable folate.  When the body is given a synthetic corm of folic acid, those enzymes need the help of vitamin C, niacin and vitamin B12 in order to convert it into folate.  (source)  Consuming these synthetic vitamins aren’t helping our bodies at all – they’re actually causing our bodies to draw on its nutrient reserves in order to properly digest the white flour, leaving the body without the nutrients needed to bodybuilding, digestion and repair.

Any ladies out there experience the unpleasant side effects of iron pills during pregnancy?  Or has anyone noticed their bathroom tendencies (…actually, the lack thereof) when they’ve eaten large quantities of white flour (in all forms)?  That’s because a side effect of large doses of synthetic iron is constipation.  How’s that for a visual the next time you reach for white bread or a cracker? 😉

Does it make you wonder why leafy greens jam-packed with iron (like spinach or swiss chard) are viewed as “roughage?”  ‘Nuff said.  Get your vitamins the natural way.  Eat whole grains.

What are you feelings on enrichment?  Did you think it was good or bad?  Were you indifferent?

« {Yummy} Recipe: Chocolate Ganache Frosting Made with Coconut Oil
{Counting Crumbs} Shopping Out of Town on a Whim and the Aftermath »