San Francisco is an amazing city with lots to see and do, but it’s also one of the most expensive cities in the country.  We recently spent a weekend in the city and had a great time – without breaking the bank!

I surprised Mr. Crumbs with a trip to San Francisco for his 30th birthday.  It took me a few weeks to find a decent priced hotel (i.e. one that wouldn’t cost me my arm, leg and first born child).  I thought finding good places to eat was going to be just as hard, but a little bit of research ahead of time made it a bit easier.  We also stumbled into good luck after driving 45 minutes around 3 blocks trying to find a parking spot.  The fruit of my labor?  Recommendations for eateries if you’re traveling to San Francisco.  Or if you need a break after driving in circles for fun.

This restaurant came at the recommendation from someone who reviewed our hotel on one of the numerous travel sites.  I wish I could be more specific and give credit where it’s due, but the review went something like this…  “The hotel is nice… blah blah blah… and you can get inexpensive and great tasting food from the restaurant next door, which also does their room service.”  Sold.  If the hotel trusts them to do their catering, there’s a pretty good chance that their food is good.

We browsed their menu online to make sure they didn’t serve crazy entrees filled entirely with ingredients we had never heard of before.  Elephant & Castle offers typical pub-type of food with a slight healthy twist.  The salads and not-usual pub fares were also tempting (steak & blue cheese salad or chicken curry anyone?).  I ordered the blue cheese & bacon burger and Mr. Crumbs ordered the chicken & brie sandwich.  The sandwiches were deliciously simple and more than enough to fill us up (we didn’t even finish our fries!).  I thought it was reasonably priced and give them two thumbs up.  In fact, we’ve already recommended this restaurant to friends of ours.

Ordinarily I wouldn’t recommend a well-known chain for dining.  How silly would I sound recommending McDonald’s?  The reason I mention Starbucks is this:  we stayed in the Financial/Downtown District.  Are banks open on Sunday mornings?  Nope.  And apparently neither are the coffee shops that primarily serve bankers.  Despite locating a Starbucks (and a few Peet’s Coffee’s) on nearly every block in the District, all but one were closed.  We ended up at the Starbucks located right next door to Elephant & Castle (which was right next door to our hotel).  Just keep this in mind when you’re out walking for a cup of java.  No thumbs up, nor down, because it tasted just like every other cup of Starbucks coffee I’ve had. 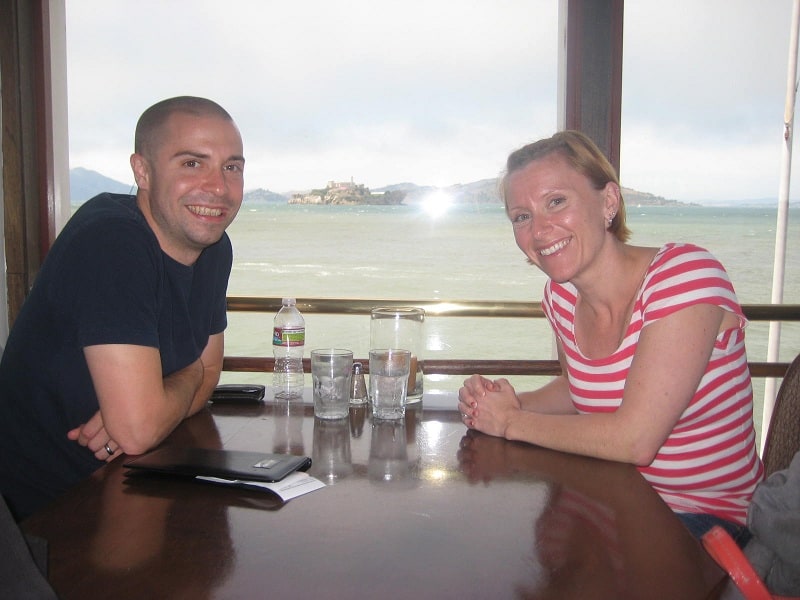 After browsing the restaurants on Pier 39, we ended up at Neptune’s.  It was the most “unique” of the restaurants on the Pier (read as not junky-food nor a chain restaurant) and the price wasn’t too outrageous.  We sat by the window and had an amazing view of the bridge and bay (including Alcatraz).  The food was good – nothing great – and it was very pricey.  We each ordered a salad and water (wanting to save room for our ballpark treats) and our bill was $40 after tip.  Would I recommend this place?  If you’re looking for a nice meal with a great view, yes.  If you’re looking for a simple lunch, no.  There are MANY places along the Pier and the Embarcadero (the street that the pier is off of) where you could easily eat for less and probably eat better.

Our 45 minute escapade of locating a parking spot was for this place.  Mr. Crumb’s boss begged us to stop here and pick up a ton of cream puffs.  Not to cross the boss, we eventually found this place and ordered for him, and then ordered one for us.  If THE BOSS wanted 20 cream puffs, then they had to be good, right?  Right.  These things are delicious.  They will melt in your mouth with creamy yummy goodness and just thinking about them is making me want one now.  I suggest you make this a priority stop if you’re in San Francisco.  Although they are a chain, so you could try them in Siberia too.  Seriously.

We totally accidentally found this place, but I’m SO GLAD we did.  At the recommendation of a foldable plastic sign that said “Mexican Kitchen –>” (think the “wet floor” signs) that we found while leaving Beard Papa’s, we turned into a alley-like walkway, oogled a humongo burrito (bigger than Chipotle) from a patron sitting outside and walked into the restaurant to browse the menu.  The menu is filled with delicious food – some authentic Mexican and some Tex-Mex – and everything is extremely reasonably priced.  Chips are complimentary, as is the salsa bar, and the servings are more than generous.  We ordered nachos and fajitas and could have easily feasted on the nachos alone.  Two thumbs up and just like Elephant & Castle, we’ve already recommended this place to friends.

We walked by here before lunch and didn’t realize the potential it had to offer.  Fresh baked bread and lunches that were HALF the price of the pier?  Sign me up!  We wished we had eaten here and is now a must-stop the next time we visit.  Give their hand-crafted teddy bears and alligators serious consideration before you walk by thinking there are “better” places up ahead! 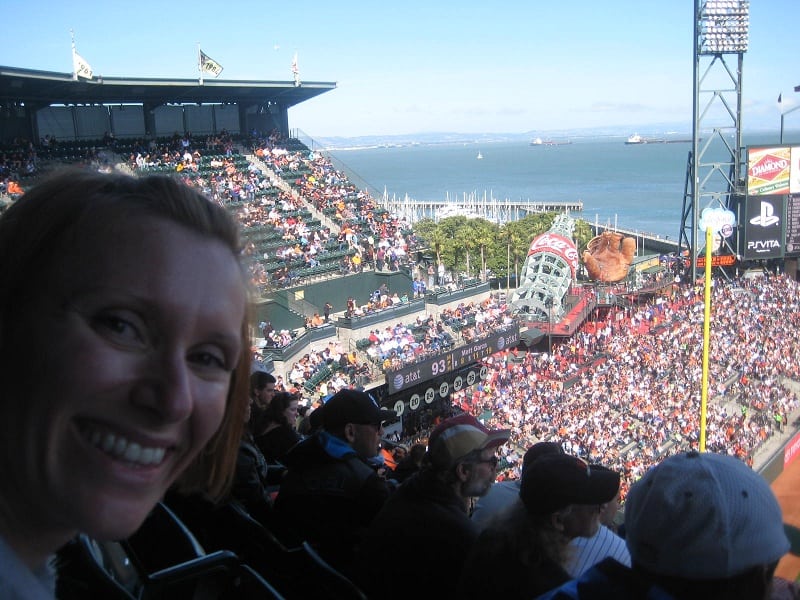 While I wouldn’t recommend eating an entire meal at a ballpark, there are a few snack items that are required if you are truly going to enjoy America’s favorite past time.  Our game started at 4:15pm – too late for lunch and too early for dinner.  We ate light for lunch so we were able to afford (in tummy space) to snack at the game.  I recommend the same for various reasons.

In the end, we splurged and split a package of peanuts.  Crazy and adventurous, I know, but we were able to snack and enjoy the game while still having an appetite for dinner and not blowing our trip budget.  Looking back, we wish we had tried the garlic fries instead of getting peanuts.  Our die-hard Giants fans RAVE about the garlic fries and even scolded us when we got home for not ordering the fries, so do us both a favor and try the fries.  You won’t regret it later.

How you can find cheap(er) food when you travel too:

Disclaimer:  I am not being paid by any of the above establishments to provide a review.  I am writing based on my own experiences and hope that you order the garlic fries.  Yes, I hear they’re THAT good.