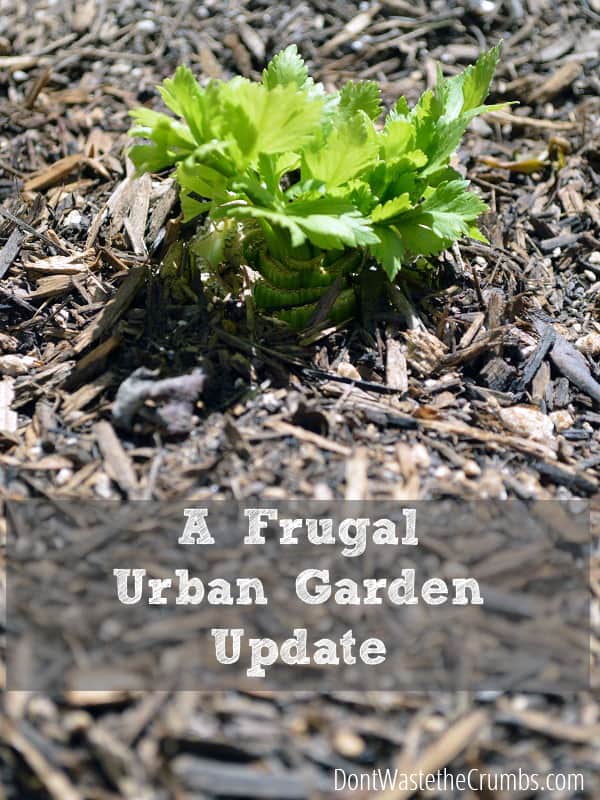 I’m absolutely amazed at how far our garden has come in just four weeks and I hope your garden is flourishing too!!

These updates are more for fun than anything, but I’ve learned a few things along the way that I’d like to share with you too.  So without further ado, here’s how the garden is coming along! 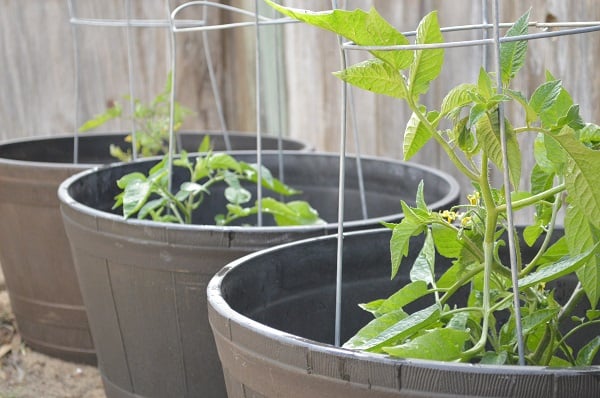 Here’s how the big the two tomatoes we have are, in my hand to give you an idea of their true size:

And here’s how they look as of Wednesday: 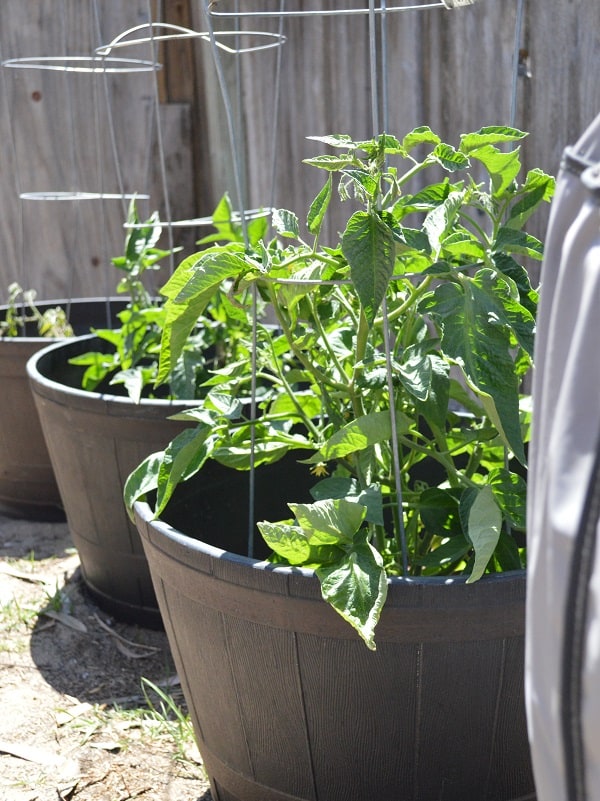 That’s a lot of growth for barely two weeks!  Guess what that big one up front is hiding at the base? 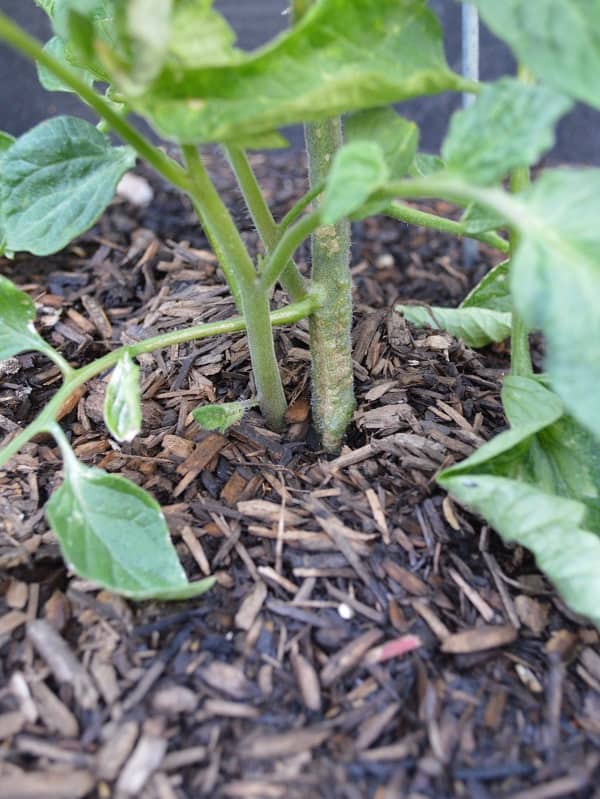 Didn’t one of you lovely readers mentioned to plant the tomato with at least one leaf under the dirt, so that it would grow better (or stronger?)… or am I remembering wrong?  In either case, I think that’s what happened here!  That second stem on the left is starting to grow and become nearly as full as the main stem on the right.  Does this mean we’ll get more tomatoes?  I have no clue!  But it’s fun to watch nonetheless!

Here’s how the lettuce is progressing: 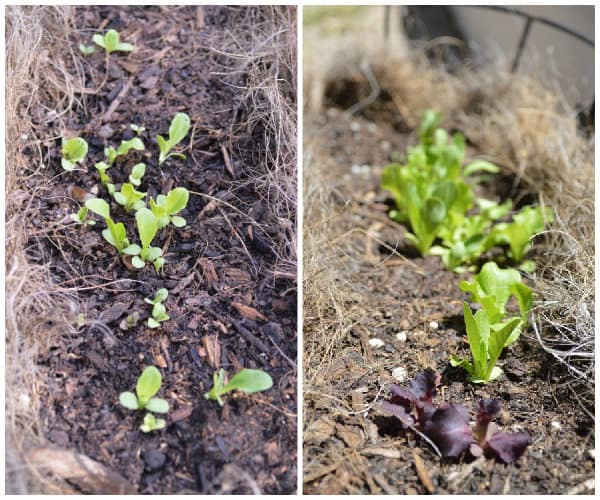 Remember this post about re-growing lettuce in water?  Well we did that with the three heads of lettuce and celery from the farmers market earlier this month.  Check out the growth in just about 10 days: 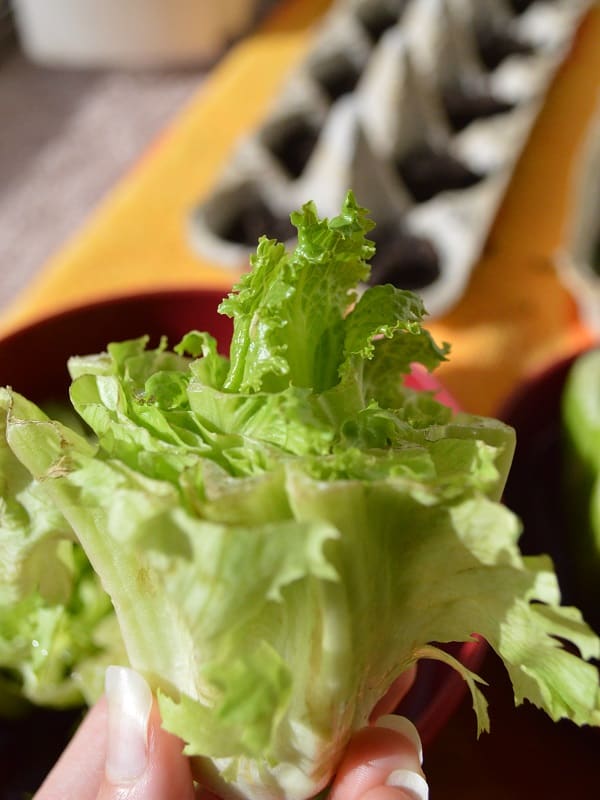 Since this lettuce is a complete experiment, we went ahead and planted in the garden to see if it would keep growing.  The results? 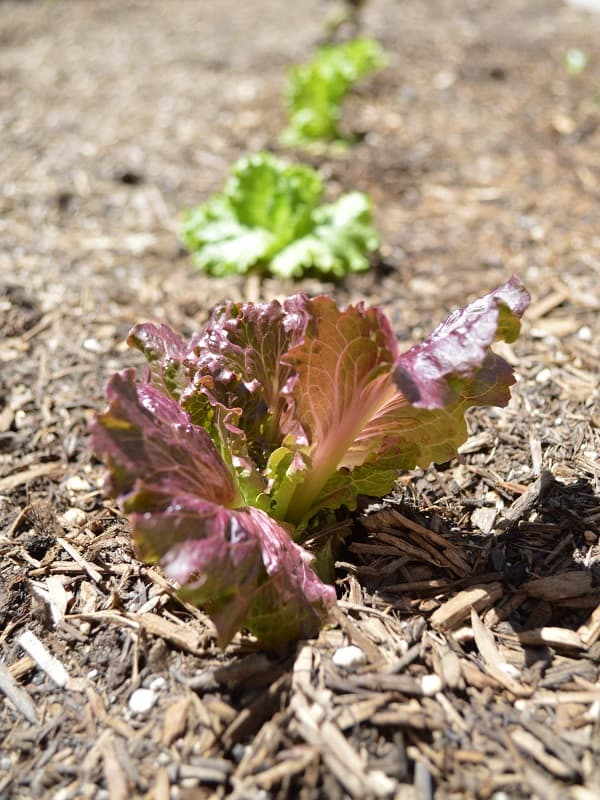 So far so good!  They’re planted with the top of the lettuce – where I originally cut – just below the soil line.  It’s taken them a little bit to acclimate, but at least they’re not dead!

And here’s an update on the celery: 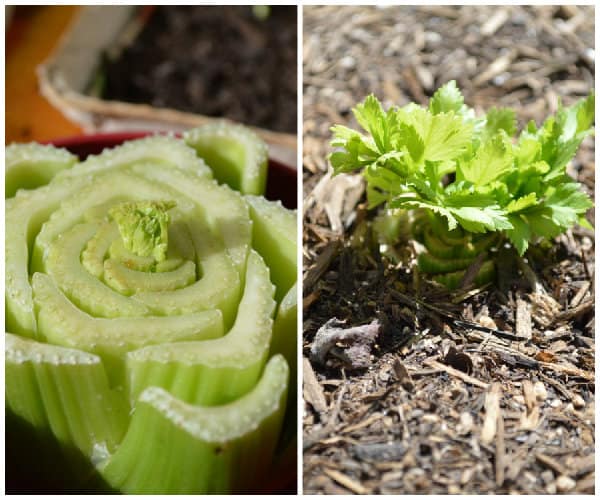 Did you catch a glimpse of what the lettuce was transplanted into?  That would be my new raised bed!

Oh my, did I forget to mention that he built one? 😉

A step-by-step tutorial coming very soon I promise!  Back to the lettuce – after transplanting from basket to bed, only four of nine seedlings survived. 🙁  We planted more lettuce in the row, plus a second row of lettuce but I’m not quite sure if they’re doing so hot.  Nothing is growing where I sowed the new seeds… 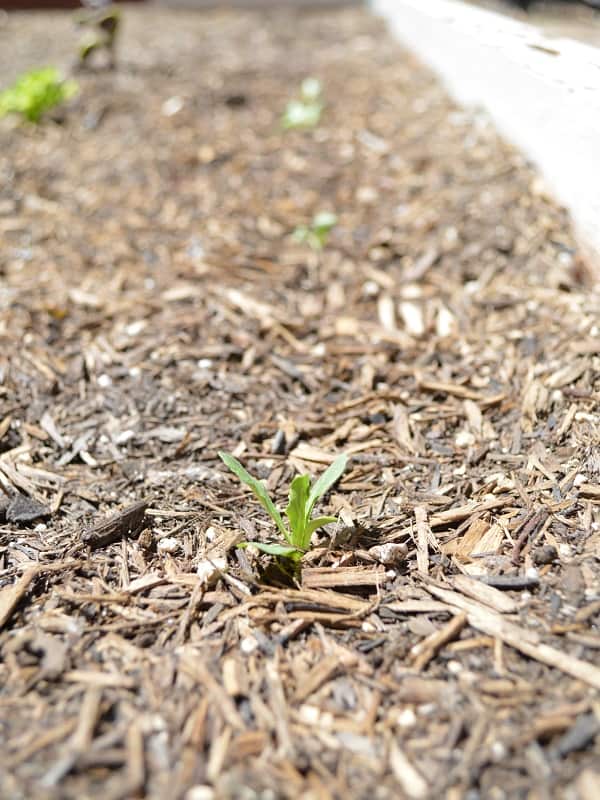 The green you see in that row is what survived, and you can see the lettuce re-grown in water there on the left.  You see all that brown in between the green baby lettuce plants and in between the two rows?  That would be all the NEW lettuce I planted… that isn’t growing.  *sigh*  I guess we’ll just wait and see, right?

Meanwhile, the zucchini is doing GREAT! 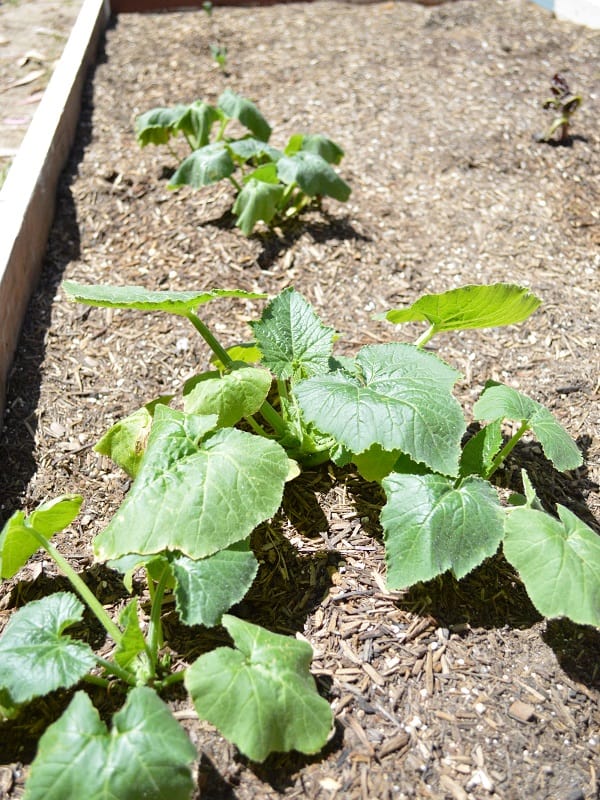 I keep hearing that zucchini get REALLY big, so when we transplanted these from the buckets, Mr. Crumbs tried to take just the two biggest plants of them all… but the roots from the plants were all inter-grown and mixed up and such, so he just grabbed as much plant and root as he could and hoped they would survive.  Fortunately, they did and they’re all growing leaps and bounds.  Just from two days ago, they’re already bigger than this picture!

Of the original seven carrots transplanted into my tomato pot, only two survived.  Then, one was accidentally killed earlier this week (more on that in a moment) so we sowed more carrots. 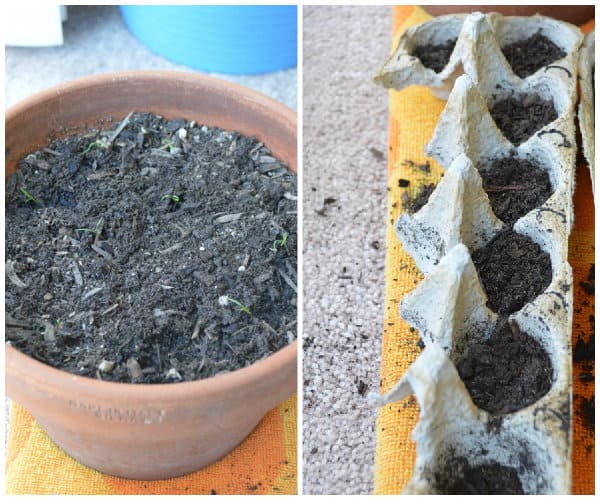 They were all started in egg cups, but oddly, only one side of the container sprouted… What’s up with that?!  We moved those sprouts to a bigger pot so that the roots could grow firm before moving them into the garden… there’s 8-10 carrots or so in the pot.  I haven’t given up hope on the egg crate though so we’re still watering faithfully, just in case!

We’ve added a few more plants to the garden as well.  First up, is broccoli: 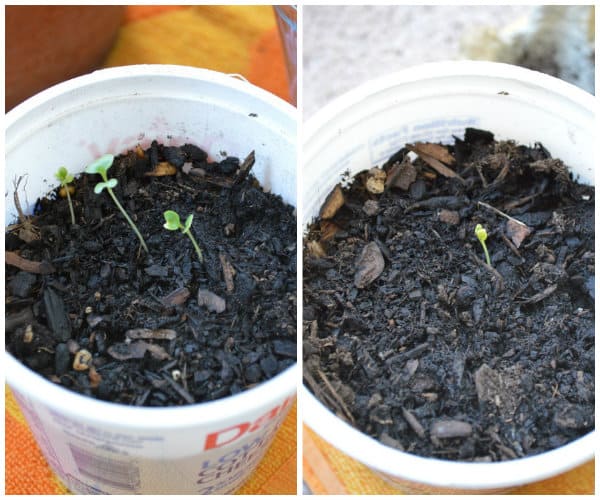 There are four sprouts at the moment and hopefully we’ll transplant these into the garden, or at least give two from the left their own container.

Here’s the yellow crooked neck squash in the garden, on the right: 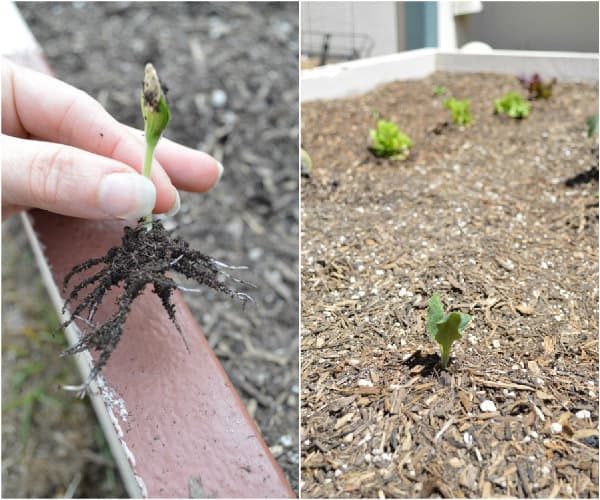 We actually planted two of these, lined up with the zucchini.  The picture on the left is of the squash as I was moving it to the garden.  I wanted you to see how much the roots had grown inside, after just 10 days or so!

We originally started eight squash seeds, because you never know how many will actually sprout, right?  Well looky here: 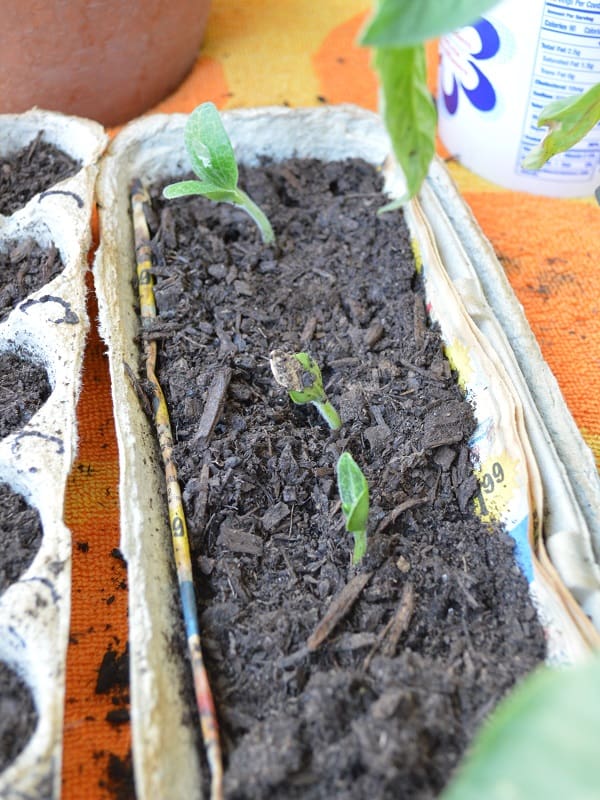 And they’re growing FAST!  If you live in Central California and you’re looking for some organic yellow squash sprouts for your garden, let me know!! 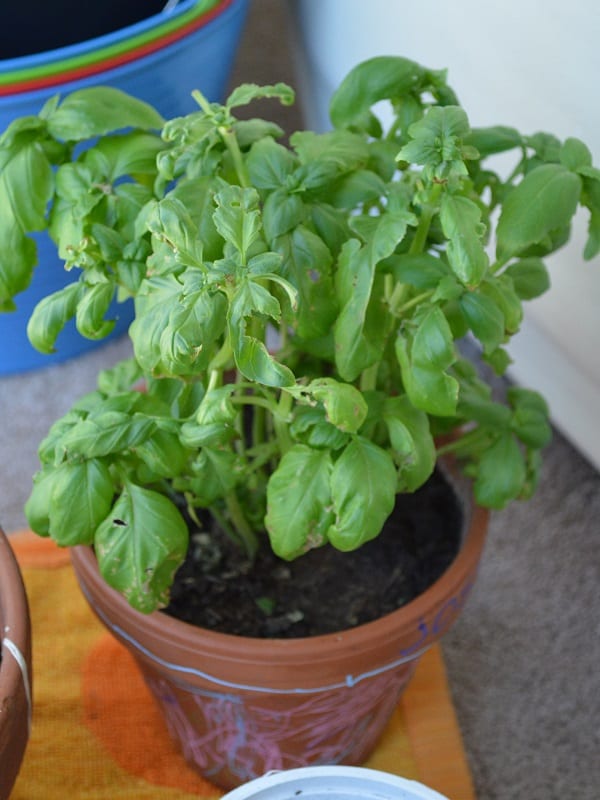 This one has a short story to go with it too.  During a recent shopping trip to buy basil for homemade pizza sauce (yum!), a single bunch of basil was $3.  Nearby, a basil plant was $3.  Clearly the plant is the better deal, and since we’ve jumped two feet on the garden train, the plant made it into the basket.  It’s found a home just inside our back window where it gets the warm, evening sun.

Lastly, we’ve had two unwelcomed guests to our garden as well: 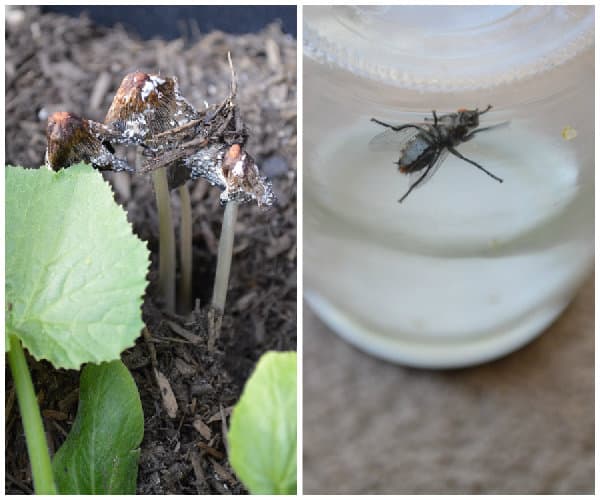 On the left are wild mushrooms, originally growing in the pot where the zucchini were.  Despite moving the zucchini, they’re still growing in that same pot!  So weird.  They’ve only got a life span of 2-4 days, and then they’re toast, but annoying nonetheless.

That little, annoying and awful critter on the right is a grey flesh fruit fly.  It feeds on decaying matter, lays TONS of larvae and breeds like you wouldn’t believe.  They found the fish heads I used to fertilize my tomato plants and decided to make a home.

Long story (that I’m saving for another post) short, a wonderful lady at a local store helped me find something that zapped those guys gone.  This literally happened in the past two days, so we’ll know more about whether the tomatoes were damaged or not by these bugs a bit later.

Unfortunately, I accidentally killed my biggest carrot top while whacking away at these flies.  I was VERY upset, at least as upset as someone could be at a carrot that wasn’t even a carrot yet, but still.  It was a huge blow to my green-thumb ego.  RIP little carrot.

Wow… I’ve had a garden a whopping 6 weeks and I already feel like I’ve learned a ton!  Here are some changes and improvements on my planner for next year:

The garden has come a long way, don’t you think?

I love hearing from you guys, and I’d love to hear how your garden is growing!  Did you start one this year?  How’s it doing?  Any challenges? 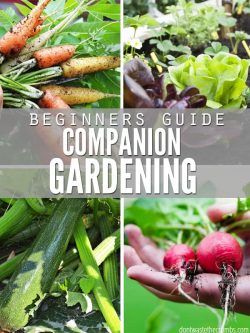 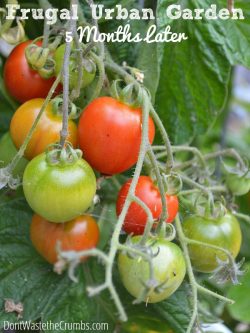 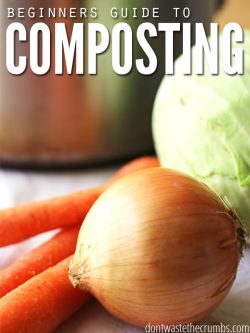 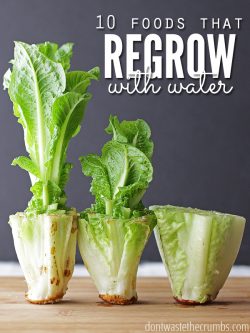 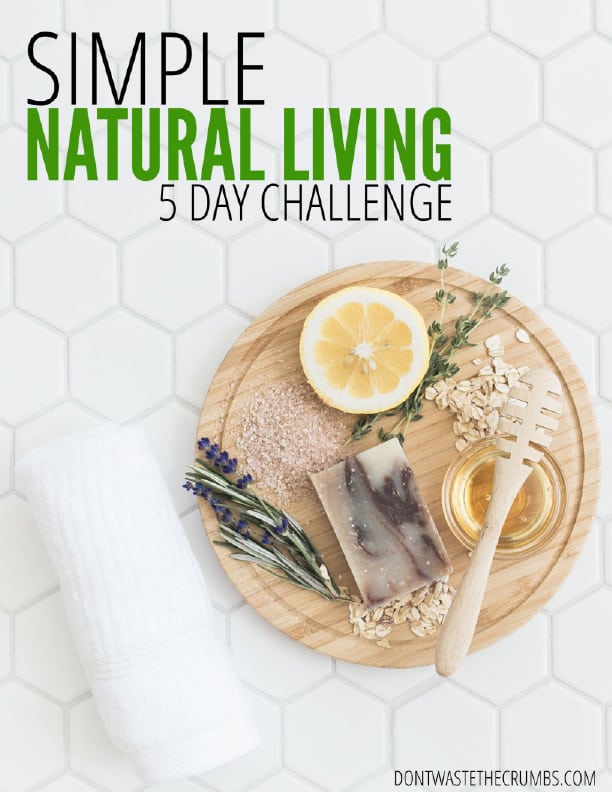 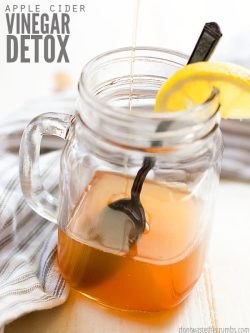