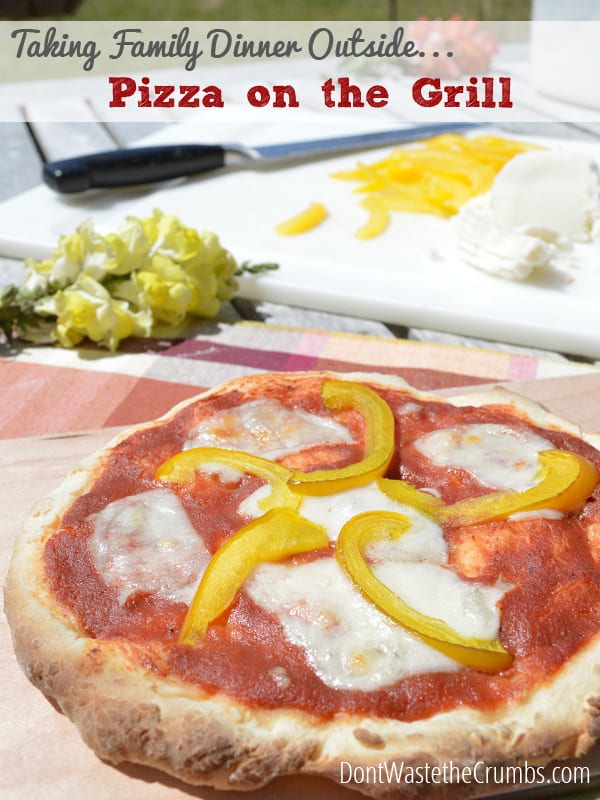 This post is brought to you by MightyNest.  All opinions are 100% mine.

We had a heat wave come through our area last week.  Temperatures hovered at their usual 68F until Monday when it got up to 78F.  Tuesday was a blistering 92F and although not quite as hot, we still felt the heat on Wednesday when it reached 86F.

And you know what?  You’re absolutely right!  It’s pretty clear that our blood has thinned since we moved to Central California nearly six years ago, and we’re nothing but big wimps when temperatures get hot.

In our defense, houses around here don’t have air conditioning.  When temperatures are hot and you want to cool the house, your options are either to open up every window and hope you get a cross-breeze, or go to the beach.  Both work well enough, but neither option is very accommodating to a dinner that requires a piping hot oven.

It’s no secret that we’re huge fans of homemade pizza.  So much so that pizza on Fridays at the Crumbs house isn’t just a meal, it’s an event. 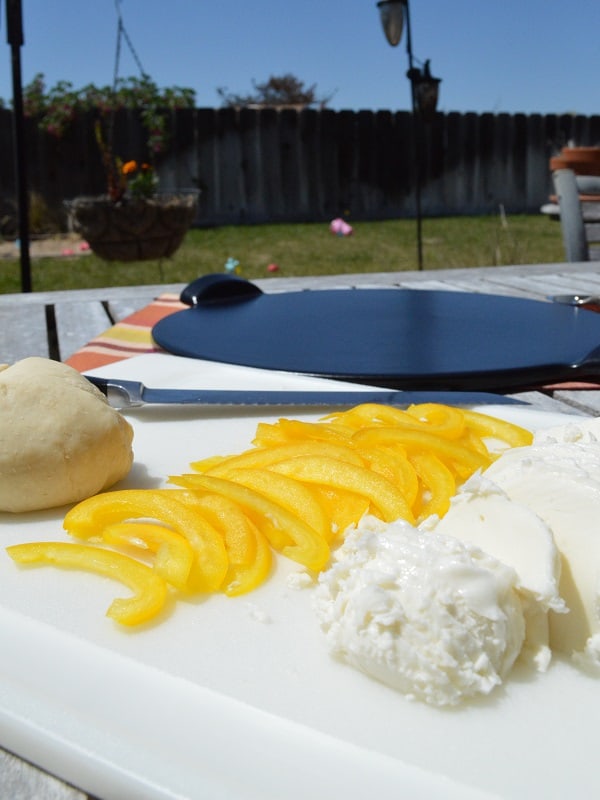 Problems arise though when the weather begs us to come out and play.  It’s inevitable that one of the following happens:

Thanks to this short heat wave, I now understand why so many people look to a slow cooker or the grill to get dinner on the table, rather than turning on the oven.

But I have a better idea.  Instead of finding an alternative to the oven, let’s purposely take family dinner outside this summer! 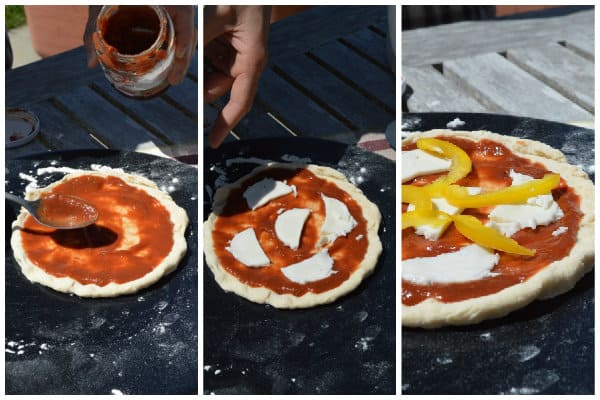 We’ve always wanted to take our family pizza night outside to the grill, but our one attempt turned into an awful, awful mess.  Traditional methods say something like this:

Slide the dough on the grate, cook for two minutes, then remove.  Flip it over, add the toppings and finish grilling on the grate.

That’s great and all – on paper – but that’s not what happened in real life.

As soon as we put the dough on the grate, half of the crust fell through.  We tried to troubleshoot the dough and salvage what we could, but the remaining dough burned to a crisp.

Still, we kept going, really giving this grilled pizza thing a try and topped what dough was left.  Immediately, the toppings fell off into the flame and all we were left with were messy, saucy, burned pieces of dough.

“Disaster” is a fairly appropriate term to describe that adventure.

I knew the only way Mr. Crumbs would EVER try making pizza on the grill again is if we had a stone.  The only catch is the stone needed to be able to stand the heat of the grill AND produce the type of pizza we’ve grown to know and love from our own kitchen. 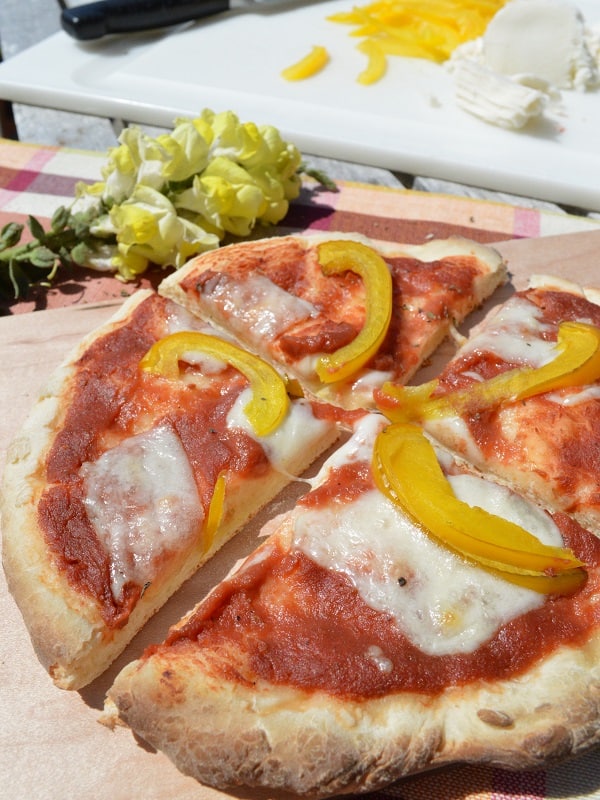 In order to withstand the intense heat, pizza grilling stones should ideally be:  a)  made of one solid piece, and b) made out of ceramic.

Notice what they shouldn’t be made of:  Stone.  Sound strange?  Let me explain.

Real stone is porous, so it contains tiny pockets of air that expand and collapse depending on the surrounding temperature and the moisture in the air.

Have you ever had a wooden door work just fine in the winter, but stick like crazy in the summer?  It’s because the wood absorbs the moisture when it’s hot and humid and it expands slightly, making it tougher to open and close.  The air pockets in natural stone do something similar.

Because of this, these types of grilling stones should be given at least 30 minutes on the grill to warm up and then sufficient time on the grill, after cooking is done, to cool down properly.  These are precautionary measures to prevent the grilling stone from cracking.  Neither are impossible tasks per se, but it does seem wasteful to run a propane tank or keep charcoals piping hot for 30 minutes without actually cooking anything.

Another issue with stone is that those same tiny pockets of air can trap moisture before, during and after the cooking process.  If those pockets of air are filled with moisture, the stone can cause the grill grate to rust if they stay in contact with each other over a period of time.  This can happen in as little as one week!

Again, it’s not an impossible task to allow the stone to cool properly and then bring it inside the house for storage, but it’s definitely not convenient.  Coals can take up to four hours to cool properly, and I don’t know about you guys, but the chances of either Mr. Crumbs or I remembering to bring the stone in from the grill – four hours after dinner – are slim.

In fact, there’s a good chance you’ll find us in bed by then!  And the likelihood of either of us remembering the next day are practically zilch.  So while the whole “remove from the grill to prevent rust” idea works in theory, I don’t think it works that well in the real world.

There are some pizza grilling stones that are attached to metal pedestal, thus eliminating the need to take it off the grill for storage, but then we run into another issue:  The chances of the stone cracking at the point of drilling (where it’s attached to the metal) are greatly increased.  Again, great in theory; not so great in execution. 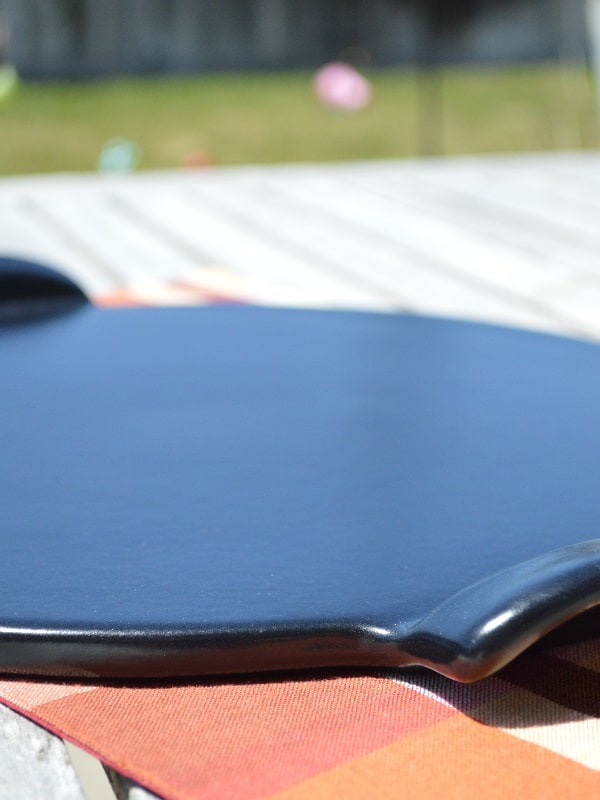 This is why grilling stones should be made of ceramic.  Ceramic stones don’t contain tiny holes of air, thus eliminating the need to warm up or cool down.  They’re also non-toxic and non-porous, meaning they won’t leach any harmful toxins into your food or cause your grill grate to rust if you accidentally leave it out!

This particular ceramic grilling stone has earned the seal of approval by MightyNest, a family-owned company that pledges to keep your family safe, save you time and ease your mind when it comes to safe, practical and useful gear for you and your home.

According to their pledge, MightyNest ensures every product is free of toxins like BPA and lead.  They interview manufacturers about both their products AND the manufacturing process.  MightyNest only offers items that are made with stable, non-leaching materials.  But, instead of making you screen through hundreds of options, they only offer the best of the best.  And the best part – the founders themselves hand-select and personally screen and tested every item for safety.  If you have a chance, I encourage you to read more about their pledge here.

Few cooking items have made it to the top of MightyNest’s list, but this ceramic pizza stone by Emile Henry did!

As someone who has spent more than her fair share of hours scrubbing cooked on gunk off pots and pans, that last point is music to my ears! 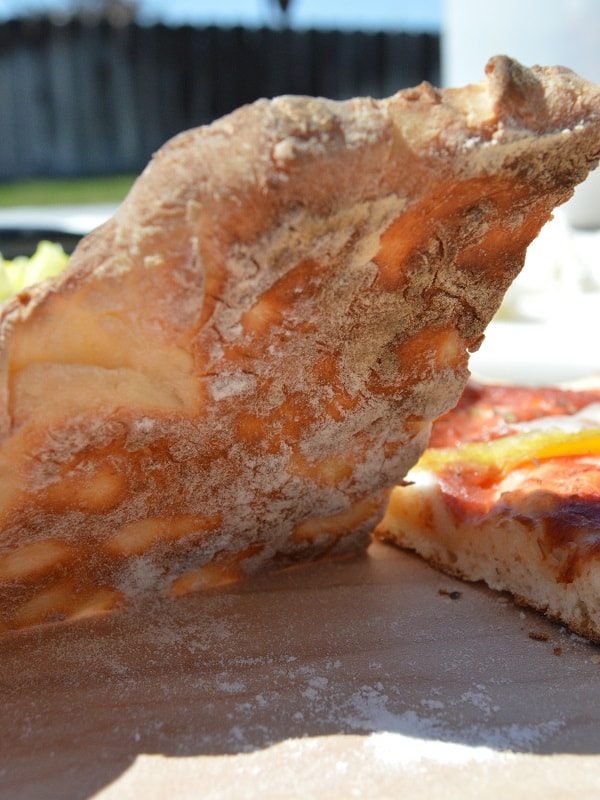 Homemade Pizza on the Grill

Mr. Crumbs and I have tried two methods with this pizza stone:  The one above and also letting it preheat in the grill for about 10 minutes before placing a pizza on top with a pizza peel.  Both methods produce a crispy, cracker-like crust and both taste delicious.  The preheating method gives the crust a bit more of a chew than a crunch,  but then it becomes a matter of personal preference.

In either case, start with your favorite recipes and experiment.  Trying out the different flavors of pizza while enjoying the summer weather is half the fun!

Ready to try a fresh new approach to family dinner with me?

One of MightyNest’s goals this year is to raise awareness about safe and non-toxic products.  They’re doing this by partnering with parents and over 26,000 schools!

This post is brought to you by MightyNest and Crumbs is honored to partner with them in their mission to raise awareness of safe and non-toxic everyday gear for healthy, mindful living both in schools and in life. Take a small pledge with MightyNest and be a part of their mission.

Disclaimer: I received the same prize package listed above to review, but this in no way affected my personal opinion on the product. I only endorse products I wholeheartedly believe in, and I fully support the products and cause of MightyNest. 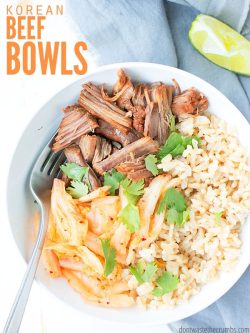 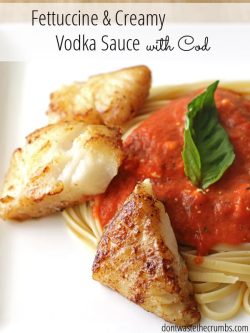 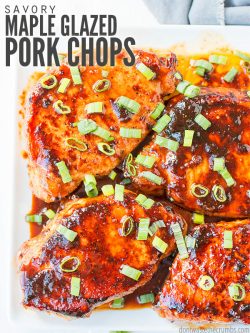