Navigation
You are here: Don't Waste The Crumbs » Saving Money » Pumpkin Week: Creamers, Smoothies and Drinks for All Ages 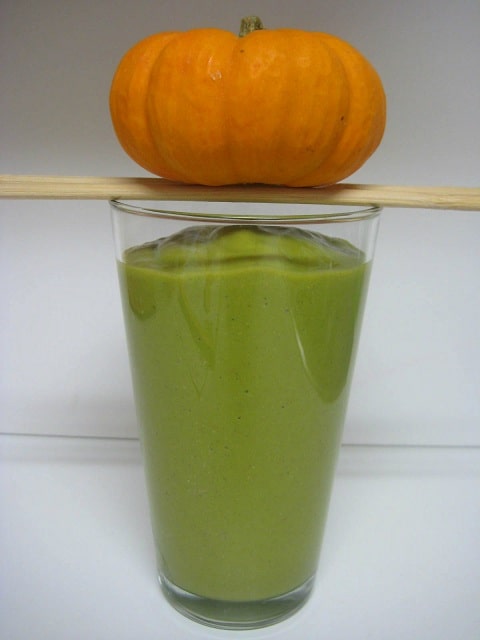 Before we get into how we can enjoy a little pumpkin without feeling like we’re eating a squash for breakfast, I wanted to mention a few more reasons why we should eat them in the first place:

1. They’re seasonal produce.  They’re not available year round and there will come a day when they’re abundance will end.  Nutritionally, it’s important that we vary the fruits and vegetables in our diets.  It’s also important that we expose our kids to as much variety as we can.  Skip the potatoes au gratin and roast some pumpkin instead.

2. They’re cheap.  The baking pumpkins I bought for my experiments this week cost 78¢ each at Walmart.  For $1.56 I ended up with 40 ounces of puree (otherwise known as A LOT).  The farm we went picking at last weekend was selling pumpkins for only 19¢ per pound.  Folks, that’s DIRT CHEAP!  Remember the rule of thumb to aim for $1/lb for fresh produce?  This deal far surpasses that goal.  Start with LocalHarvest.org to find a local farm where you can pick your own pumpkins.  Better yet, prices will likely go down even further as the season progresses (know many people who buy pumpkins after Halloween?).  Call before you go to see where their prices are.  Don’t forget that you can store pumpkins for a few weeks before they’re no longer prime!

3. They’re natural and real produce.  These gems are not man-made and there’s nothing artificial about them.  We’re encouraged to eat “so many” fruits and vegetables a day.  Pumpkins count!

Pumpkin spice creamer is one of the highlights of the pumpkin season.  Nothing beats waking up with a freshly brewed, hot cup of fall each morning.  Unfortunately, most of those incredibly delicious creamers are incredibly dangerous.  (Have you heard?  Coffee creamer is more like plastic than dairy.  True story!  Check it out.)

Homemade pumpkin spice creamer hit blogland like a storm and most recipes run along the same lines:  dairy (or non), pumpkin, spice, sweetener.

I thought this recipe had potential, but it just wasn’t pumpkin-y enough for my liking.  It could have been the fact that I used fresh instead of canned (remember that the canned flavor is more concentrated), or that the recipe requires straining and it seemed like pumpkin goodness was  being lost in the sieve.

The bright side?  The stuff that’s left in the sieve after you’ve strained it is DELICIOUS.  It was a highly concentrated, full of pumpkin flavor complimented with the spice and maple syrup.  Absolutely divine.

This “stuff” was so good that I’d recommend making the recipe just for it.  Use the creamer portion in a pancake recipe, or atop as syrup, or maybe thicken it up with powdered sugar and it can be a pumpkin flavored icing.  Either way, the “stuff” alone was worth the recipe.

After not being completely satisfied with this first recipe, I tried a pumpkin spice latte version instead, modifying it to being more of a creamer and not so milk-y (as required for a latte).  I subbed half & half for the milk and skipped the condensed milk, but kept everything else as written and used homemade puree.  Now this recipe was good.  It could have been the brown sugar instead of the maple syrup, or perhaps the greater quantity of vanilla extract, but I drank and enjoyed nearly every bit that this recipe made.

Print
Ingredients
Instructions
3.2.2708
I would definitely make that recipe again, both as I altered it (for creamer) and as written (if the day calls for a latte).

My first attempt at a green pumpkin pie smoothie was a total bust.  It tasted like I merely added pumpkin puree and the pie spice to my regular green monster smoothie recipe.  This shouldn’t surprise me though, because that’s exactly what I did.

My second attempt however, was over the moon.  Remember the “stuff” from the first batch of creamer?  I wasn’t sure what to do with it, so I tossed it into my smoothie.  An amazing firework show happened in my mouth and the smoothie was gone in one long slurp.  Yum-O.

So how can I make a great green pumpkin spiced smoothie without wasting a bunch of ingredients on a so-so creamer?  Combine the following in a blender and enjoy:

Print
Ingredients
Instructions
3.2.2708
Looking for a non-green pumpkin pie smoothie?  I’ve got one of those for you too:
Pumpkin Pie Smoothie

Not everyone enjoys coffee, nor does everyone like smoothies.  This is no excuse to not enjoy pumpkin!  I’ve rounded up some delicious recipes for you all to try out.  Given my inability to resist the second version of pumpkin creamer (plus the breads, cookies and cakes coming later this week), I wasn’t able to taste test these myself.  If you decide to make any of these, please leave a comment with your review!