Navigation
You are here: Don't Waste The Crumbs » Real Food 101 » Coronary Artery Disease and Saturated Fat: Is there a link? 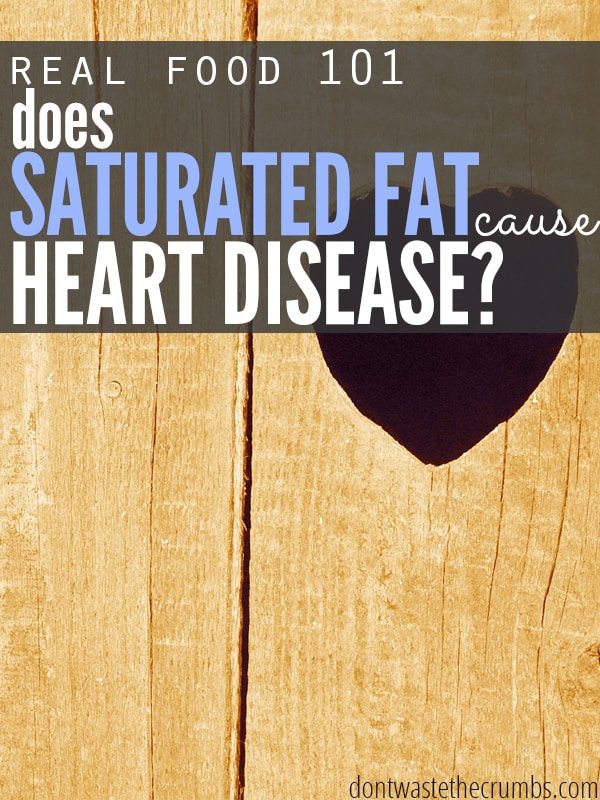 In the midst of researching for today’s post I had a freak out moment.

It started with an innocent question:  What does saturated fat have to do with heart disease?

And it ended with an insane rabbit trail down a path that doesn’t seem to end.

I’ve written about the science of fat and how it can be good for our bodies.  But there are three other very important reasons why the topic of fats reeled me in from the start.

Mr. B is a man in his early 50’s.  He was considered an active man, exercised often and enjoyed his favorite meal of “steak and fries” often.  He had a heart attack last fall and had no heart beat for several minutes before the paramedics revived him from a heart attack.

Ms. S is a woman in her mid 70’s.  She has been a socially active woman, but did not exercise regularly.  Approximately two years ago, she had a blockage in an artery that caused irregular heartbeats and trouble breathing.  The doctors performed open heart surgery, inserting a stint to aid in blood flow.

Mr. G is a man in his mid 60’s.  He has exercised daily since high school and has always maintained an overall healthy diet.  As he’s aged, his blood pressure has slowly increased and he has been prescribed medicine to help keep the numbers in normal range.  Within the past year has made an attempt to lower his blood pressure even more by eliminating as much dietary fat from his diet as possible.

These three people each play a significant role in my life, and each are taking major steps to protect themselves from coronary artery disease.  One of those steps includes avoiding saturated fats.  Are their efforts worth it?  Or are they futile?

Coronary Artery Disease and Saturated Fat: Is there a link?

I’m happy to share the results of my rabbit trail research.  It may shed some light on how we approach heart disease and cause even more questions about the food we eat.  Just remember that I am not a medical professional and this information should not be misconstrued as medical advice.

With that said… I’ve come to three strong conclusions.

1. We are told what the diet dictocrats want us to hear.

2. Data is manipulated to fit any agenda.

Strangely just one generation prior, heart disease was so rare that the inventor of the German cardiograph had a difficult time locating patients who would actually benefit from his machine (which was able to detect arterial blockages, allowing an early diagnosis of heart disease).

What changed in those 40 years?

World War I made gas stoves and electric refrigerators common in the average home.  Food manufacturers embarked on new methods of production, creating canned, pre-packaged and frozen goods.  Women in the workforce needed fast foods and appliances to help them cut down on meal preparation time at home.

The modern-day food system we know today – the pre-packaged boxes, heat-and-serve meals, just-add-this and eat dishes – was largely in place as of 1930.  Chemists created additives such as methylcellulose, cellulose gum, carrageenan and guar gum in the next decade or so following and production hasn’t stopped since.

I can’t pin-point exactly how our country came the conclusion that saturated fats are bad for us, but there’s an hour-long video here that I plan to watch over the weekend that I hope will shed some light.  Meanwhile, we’re working with the conclusion already drawn.

One study most often cited for a direct correlation between saturated fat and coronary artery disease is the Framingham Heart Study.  The study began in 1948 and continues to this day.  The objective was to find a common factor leading to cardiovascular disease, over a long period of time, among people who had not yet developed the disease or suffered a heart attack or stroke.

Dr. Michael R. Eades, M.D. has a great write-up of the true findings of the study, after researching online and paying $80 to get a copy of the original paper results.  To quote Eads (who’s quoting the study):

… there was no discernible association between reported diet intake and serum cholesterol level in the Framingham Diet Study Group… As to coronary heart disease, it was prospectively (supposed to be) related to diet.  No relationship was found.

Did you guys catch that?  The researchers of the most comprehensive and most quoted study on saturated fats and diet expected to find diet directly influencing cholesterol, which in turn would affect coronary artery disease – but they didn’t!

Despite what the data showed, the director of the study Dr. William B. Kannel was quoted in a Framingham newspaper dated October 30, 1970 saying something quite the contrary.  Quoting Eads (who again is quoting the newspaper):

Although there is no discernible relationship between reported diet intake and serum cholesterol levels in the Framingham Diet Study Group, “it is incorrect to interpret this finding to mean that diet has no connection with blood cholesterol,” Dr. William B. Kannel, director of the Framingham Heart Study has stated.

Anyone else wonder why Dr. Kannel refused to believe his own researchers’ conclusions?

Do polyunsaturated fats cause heart disease?

Let’s give him the benefit of the doubt and say that diet saturated fat does indeed cause coronary artery disease (by way of dietary cholesterol).  Then we would expect to find an enormous increase in the consumption of saturated fats in our diets to accommodate the increase rate of heart disease from 1910 to 1950, right?  According to Nourishing Traditions, the opposite is true.

From 1910 to 1970, the proportion of traditional animal fat in the American diet declined from 83% to 62%. At the same time, butter consumption plummeted from 18 lbs per person per year to only 4.  To intensify the argument, processed vegetable oils like margarine, shortening and refined oils increased 400%.  The consumption of sugar and processed foods in general increased about 60%.

Neither the Framingham Study nor the work by Mary G. Enig, PhD was convincing enough though for the government and pseudo-government groups.  Another study began in the 1960’s called the Sydney Diet Heart Study. This studied the effects of replacing saturated fat with omega-6 linoleic acid, to aid in the prevention of heart disease.  Specifically, they were given safflower oil and margarine while told to abstain from animal fats.  However, just like the Framingham Study, not all of the original data was published when the results were made public.

In 2012, clinical investigator Christopher E. Ramsden, MD went back and re-evaluated some of the data from that study.  He and his research team concluded:

Not only do we have research that de-bunks the correlation between saturated fat and heart disease, but replacing saturated fat with omega-6 actually INCREASED the death rate!

This makes sense though.  I’ve briefly explained the importance of omega-3 and omega-6. But I didn’t go too deep into it because if we’re getting these essential fatty acids from natural food sources, then there isn’t much to worry about.  However, danger lies when we consume far more omega-6 than omega-3. This happens very easily since omega-6 is found in commercial polyunsaturated oils.

Polyunsaturated oils are prevalent in many of the processed food packages Americans buy and consume.  Too much omega-6 increases the risk of heart disease. The imbalance of omega-3 and omega-6 can make our body form blood clots, increase our blood pressure, depress our immune function and reduce the capability of our cells to thrive. (Nourishing Traditions, pg. 10-11)

The participants in the Sydney Diet Heart study only increased their calories from omega-6 by 5%. Yet, this small increased raised the death rate from cardiovascular disease to 35%! (source)

Is the research incorrectly linked?

Chris Kresser, a practitioner of integrative medicine said the following on Ramsden’s evaluation:

Kresser is right.  Conclusions are drawn to suit the needs of the organizations.  You can see its influence on the American Heart Associations’ claim that “polyunsaturated fat… [will] help lower your cholesterol.  Specifically, {it will} help lower your bad LDL cholesterol, which means [it] can help reduce your chance of developing heart disease.” (source)

And as pseudo-government groups continue to promote polyunsaturated fat as healthy (despite the research showing otherwise), people continue to believe the fallacy. Society at large has been convinced of the untruth and buys more foods touted “heart healthy” than ever before, replacing traditional fats with polyunsaturated fats in all aspects of cooking, despite these foods being filled with fats go rancid and oxidize easily.

Is the improper use of polyunsaturated fats to blame?

Kresser also explains that the most commonly found oxidized fat in cholesterol is omega-6 linoleic acid.  In an oxidized form, it’s very small and dense and can easily penetrate the lining of the heart artery.  Once the lining is penetrated, oxidized linoleic acid stimulates collagen formation, which forms a weak fibrous plaque that is prone to rupture.  The rupture of plaque is the event that causes a heart attack. (source)

How does this look in our kitchens?  We buy cooking oil, margarines, and dairy products that are modified to include extra “heart healthy” omega-6 linoleic acid.  We then heat these items, unknowingly creating free-radicals and ingest them, thinking we’re helping our hearts by feeding it the healthy fatty acid omega-6 when we’re really offering our hearts oxidized and rancid oil.

And we do it all because we believe the message that saturated fat causes coronary artery disease.

Nourishing Traditions describes many other cultures that have not only survived, but thrived on animal-based saturated fats.

The research I found barely skims the surface.  There are a lot of unanswered questions surrounding coronary artery disease and likely even more unpublished research that has been conveniently overlooked.  Certainly more studies and reviews are needed.  However, from my layman point of view, it’s clear that while we may not know the exact cause of coronary artery disease, it is certain that saturated fats have been wrongly accused.

What do you think – is saturated fat to blame for heart disease?