The lack of grocery shopping last month has CLEARLY been made up for this month.  I don’t feel like I’ve been to the store that often, but every trip has had a fairly significant total due.  No point making excuses, let’s jump in! 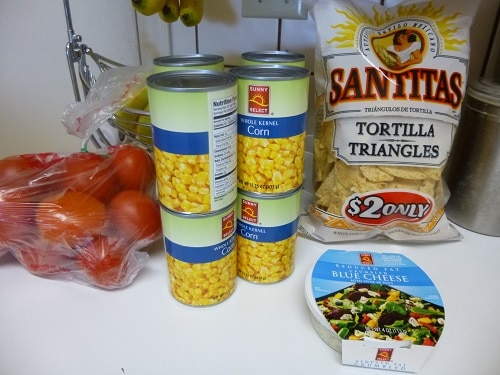 This was the very first trip of the month.  We only keep three types of canned foods in the house:  corn, green beans and tomatoes.  We’ve been out of corn for a few weeks, making due without I suppose (or rather I keep forgetting to write it down), so I jumped when I saw them on sale for 50¢ per can.  Since we only use canned corn for tacos and tortilla soup, this should easily get us through the month (and probably next month too).

The fresh tomatoes were another side-effect of not writing something down.  We ran out of our favorite Cento Italian tomatoes (<– affiliate link, use that if you’re interested in trying them out because Amazon sells them for half the price of the grocery stores!).  We use them for pizza night and tomato basil soup (which is why we ran out), so we bought fresh tomatoes this time, roasting them with a head of garlic and pureeing in our Blendtec (best.birthday.gift.ever!).

The blue cheese was for homemade blue cheese dressing (using homemade yogurt), used as a base instead of red sauce for a buffalo chicken pizza.  SO good guys.  Next time I’ll snag a photo before we devour the pie and share the recipe.  You’ll want to make this one every week!

I’ve learned my lesson on buying small shrimp.  Battering and coating in coconut when the shrimps are, well kinda shrimpy, isn’t much fun.  Now I only buy the extra jumbo shrimp, where there’s 16/20 ct per pound.  When the stars align (i.e. they’re on sale AND there’s room in the budget), I try to snag a bag. 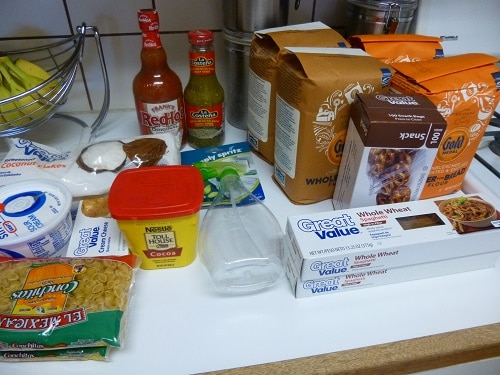 The goal of this trip was to price match a few things, but Walmart only had one item on the list – the flour.  Another chain was selling 5lb varieties of Gold Medal flour for $1.99 so I price matched at Walmart to replenish my whole wheat and bread flour stash.  Flaked coconut for baking, granola bars and homemade trail mix, (although it turned out I already had a bag in the pantry – doh!).

Small pasta, cocoa and whole wheat pasta are staples [like the upgrade in spaghetti? 🙂 ].  The cream cheese is because the first variation of the chocolate brownie cake I made Mr. Crumbs said it would be amazing with a cheesecake layer on top… except that I didn’t have cream cheese.  Now that I do, I don’t have the cake (we’ve already eaten two so far this month!).  One of these days it’ll line up right again…

Sour cream and salsa for tortilla soup, hot sauce for the buffalo chicken pizzas and a spray bottle because the last one we had broke.  The original was $1 from Dollar Tree.  This was $2 from Walmart.  Time will tell if the upgrade makes a difference. 😉 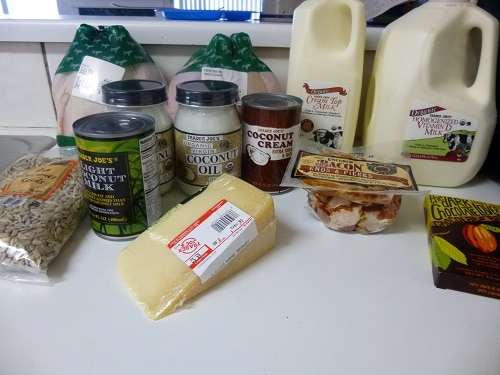 Chicken, gallon milk, parmesan wedge and sunflower seeds are pantry staples.  I bought the cream top milk (which is non-homogonized) for a WAY better price than Whole Foods last month.  It’s definitely a splurge, but I’ll continue to buy one half gallon each month because 1) it makes my kefir grains grow like CRAZY, and 2) I’m scooping some cream out to make my own butter, and 3) I like to lick the spoon from scooping the cream. 🙂

Nitrate-free bacon ends because I really wanted bacon and I’m too frugal to pay what TJ’s wanted (another dollar or two for not even a full pound?). 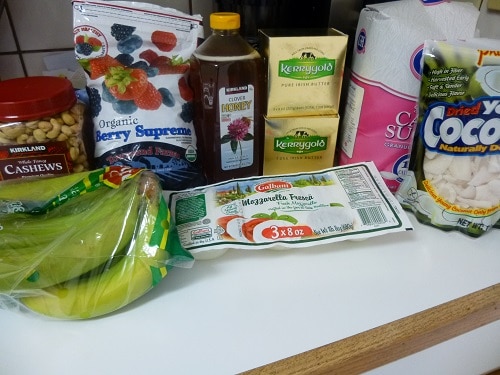 White sugar (yes I know it’s processed) is a baking staple.  It’s primary purpose has been for bread (minus the chocolate cake experiments and berry pie for Easter), but we’re cutting back on the quantity used IN desserts and the frequency of how often we make dessert.  Searching through my archives of Counting Crumbs I see the last time I bought sugar from Costco was last November.  I guess four months isn’t too bad, eh?  (Oh, and wouldn’t you know that it was $1 MORE back in November?  Perhaps because of the impending holiday season?  Sneaky sneaky…)

Onions, carrots, garlic and honey are staples (and I also bought the honey last November).  Frozen berries for smoothies and Easter dessert, TWO Kerrygold butters because it’s grass-fed and they had some (a love/hate relationship this is turning into, eh?) and bananas for snacking and smoothies too.

The only newcomers from Costco are the cashews and coconut, which I literally only bought because I couldn’t stop thinking about Jessica’s monkey salad!  Turns out it’s a good salad, but those coconut chips are deliciously addicting.  We’ve added both the cashews and coconut to our own trail mix, so it’s all good (literally!). 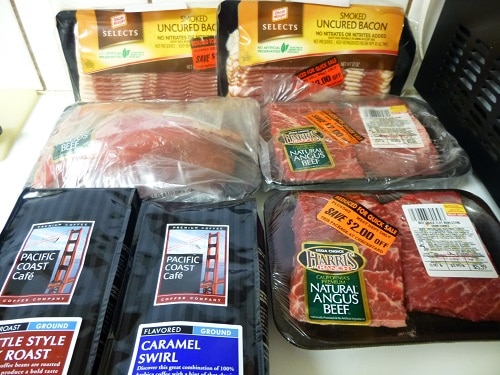 A last minute run for coffee because we had none.  Yep, none.  I skimmed the marked down meat section and completely scored – each package of beef had a $2 off sticker and both bacons had a $3 off sticker.  I could have easily bought more, especially the bacon, but I exercised restraint.  I’ve already cooked up the skirt steaks (into coconut cashew beef for us and the new mom) and we’ve eaten one package of bacon.  YUM!  The rib roast will be for next month, hopefully for a super-hearty stew or pulled beef sandwiches.  I don’t make roasts often, so I’m open to ideas on how to cook it and recipes.  Anyone have any to share?

One little tiny trip for asparagus for dinner that night.  That’s it. 🙂 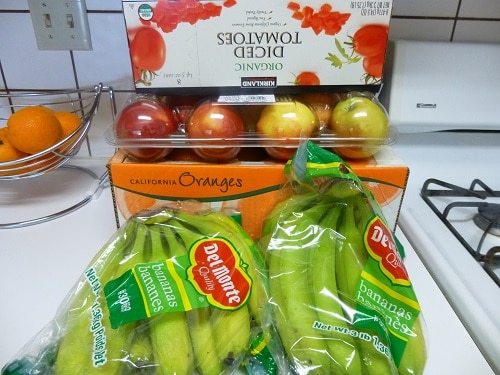 Tomatoes, kale, apples and oranges to replenish the pantry and for smoothies.  Half and half for coffee, although I’ve been preferring milk lately.

This was a way last minute trip for buffalo tacos.  I wanted fresh produce for dinner, needed wing sauce (or so I thought… I had forgotten about the Frank’s I already had in the pantry!) and needed blue cheese.  I would have made my own again, but my homemade yogurt was still incubating.  Poor planning on my part for sure, but oh well.  Can’t win them all!!

Ah, inching up there already, eh?  At this point in time I still have two whole chickens in the fridge (thawing so they can be carved  and I can make TONS of broth).  I certainly don’t need meat, but there will definitely be another produce run or two.  I’m a little skeptical about staying under budget this month, but if I can ignore the sale flyers and stay out of the stores until absolutely necessary, it just might happen.  I certainly need to utilize the food we have on hand better, that’s for sure.  We’ll see how it goes!!

Were you the winner?

Congratulation to Jennifer W. ([email protected]) for winning the Tropical Traditions coconut oil giveaway!  You should have further instructions in your inbox!  Thanks to everyone for entering – it was the biggest giveaway on Crumbs to date!

How are you counting crumbs this month?

Disclaimer: Some links in this post are affiliate links. Making a purchase through these will help keep the lights on in the Crumbs house. Thank you in advance for your support! 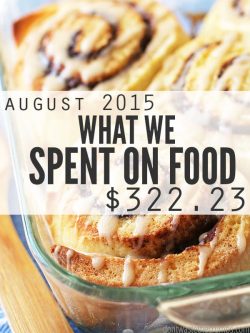 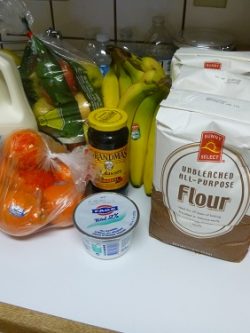