My grocery budget is $330 each month, including food, household items and toiletries. Each week I crunch the numbers to see where I stand. Today marks the end of the month. You can read about the halfway point here, where I spent the first $260.99 of my budget.

After calculating the mid-month total, I thought having $70 to last two weeks would be a breeze.  I thought wrong.  A short out of town trip sent my plans in a tail spin and there wasn’t much left to cover the rest of the month.  How did the month pan out?

Earlier in the month Mr. Crumbs went out of town for some work-related training.  The school put him up in a short-term living hotel, complete with a living room and mini-kitchen.  I sent him off with a full range of homemade goodies to help keep our out of pocket expenses down.  A week’s worth of smoothies and high protein trail mix, a couple pints of hearty spaghetti sauce, Greek couscous and wheat pasta were his arsenal.

Partway through the trip, the kids and I went to take over visit the pool and hot tub Mr. Crumbs.  I hadn’t really given our own trip as much thought with regards to food as I gave his, so I ended up making a trip to a local grocery store.  I followed the standard protocol though:  planned meals, made a list and stuck to it.  Except for the tortilla chips.  I’m SUCH a sucker for the salty corn crunch!

Breakfasts were provided by the hotel, but we needed to cover snacks, lunches and a couple dinners. Plus we had to re-stock his smoothie stash.

The fruit and yogurt were for snacks and smoothies.  I wasn’t able to make bread, so I bought a large loaf of sourdough bread from a local brand.  Knowing that sourdough requires fermentation, I didn’t feel so bad about store-bought bread.  Peanut butter for lunch sandwiches, butter for evening toast with dinner.  Since it was Mr. Crumbs’ birthday, I thought a steak dinner would be nice.  It just so happened that the cattle company I like was available at this location too, AND there were two steaks marked down to $3 off the original price.  $7 worth of quality beef seemed like a good bargain for four mouths!  I paired it with two russet potatoes and two sweet potatoes, toasted bread with butter and sliced watermelon.

Water for drinking, inexpensive conditioner because The Girl has very long hair and the hotel offered a 2-in-1 shampoo/conditioner combo… which offers NO help in the way of detangling.  Brown paper bag because I didn’t think they charged for bags.  Hmph.

Some of the food ended up coming back with us – enough sourdough to cover lunches while I made bread at home, leftover butter and peanut butter, the conditioner and the paper bag.  We’ve already eaten the butter and the peanut butter will definitely get eaten.

That item for $2.79 with question marks?  I have no idea what that was.  I didn’t take a picture and I’ve already tossed my list.  The receipt printed poorly in the first place and the ink has already faded.  The mystery remains…

Looking back, I would have done things a bit differently, but sometimes you’ve just got to roll with the punches.

The kids and I had a hankering for something sweet after we got back from visiting Mr. Crumbs.  The Girl requested pink cake and The Boy requested blue frosting.  A very cute idea, but the sight of the two colors together is kinda unappetizing… heads up if you ever get the urge to replicate.

I had everything needed for the cake, but nothing for the frosting.  I went with a cream cheese frosting, using coconut oil instead of butter.  So that’s what the powdered sugar and cream cheese were for.  See above for the note about tortilla chips.

Obviously I have a tortilla chip problem.  I’ve realized that I only crave them when I’ve eaten them recently… so I purged all the tortilla chips (by way of my stomach) earlier in the week and I’ve officially been tortilla chip free for three days.  An occasion worth celebrating!!

Early in the month I bought quart and gallon Ziploc bags from Costco (of which I’ve used only one of each…)  As it turns out, they’re on sale THIS month.  I took my receipt back to Costco and got a $4 refund, $2 per package.  I had thought about skipping out on this, but the out of town Savemart trip left me with only $20 for the last two weeks of the month.  At this point in time, every dollar counts. 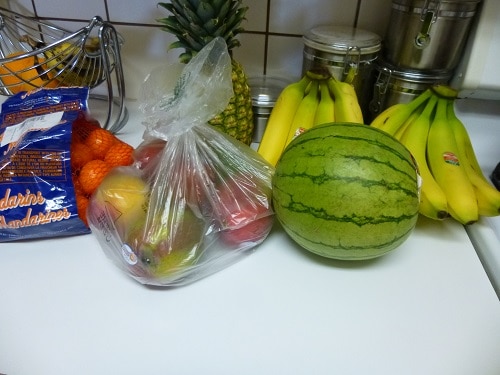 This trip was skillfully planned and executed.  I had used my head to calculate roughly $10 left in the budget and we had no fruit in the house.  None.  Yet there were still six days left for the month.  I scoured the circulars and price matched everything but the clementines and banans.  The produce was to cover smoothies for everyone, plus snacks.  It was literally just enough to last us, since as of lastnight we have 4 clementines and 4 quarter-slices of watermelon left.

Thanks to the credit from Costco, I’m under budget by $3.31.  My track record for 2013 is much better than 2012, but there’s still more than half the year to go.  I can feel the creativity that’s coming out in meals and purchases in order to keep costs down while upgrading.  It’s tough!  But I’m trying to take my own advice and concentrate on one thing at a time… so next month will be raw milk and grains.  Ok, so that’s really two, but the milk already began THIS month, and we’re re-educating ourselves in grains.  It only seems appropriate that my grocery shopping matches! 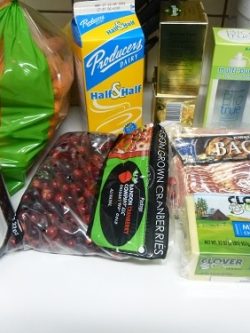 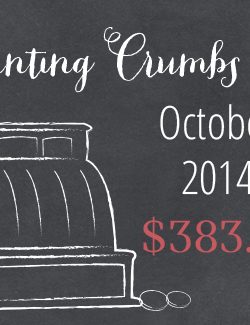