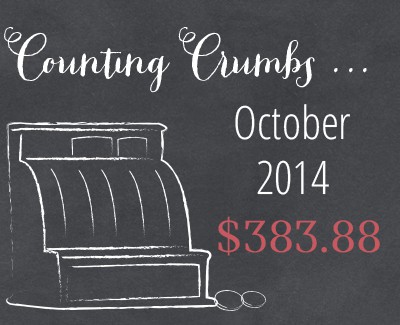 My grocery budget is $330 each month for a family of four – two adults and two kids.
This real food budget includes food, toiletries, household items as well as health & beauty products.
This post is our budget accountability sessions, where we share what we spent and how we spent it.
Today marks the end of October 2014. You can read previous Counting Crumbs reports HERE.

Okay… let’s be honest here.  Clearly, I’ve got some issues to work out.  You guys are an understanding bunch, so I hope this makes sense as I explain it and doesn’t come across as making excuses.  Because I’m definitely not.

First off, I made it a goal this month to come in under budget in order to make up the difference for last month.  Specifically, I wanted to come in at $270 or less.

That WOULD have happened if Mr. Crumbs and I weren’t so type-A about this new meal planning package we’re working on.  I’ve been sharing a little bit about it in the weekly newsletter and monthly meal plans, and your input has been VITAL in making this an amazing resource for eating real food on a budget.  However, we’re not the type of people to give you something and say it works without testing it first ourselves.

So… we tested it.  It’s the big trip to Trader Joe’s at the bottom of this post.

Essentially, we bought everything on a shopping list to make sure we could come at or under a certain budget.  And we did.

However, this was NOT in my original plan for meals or shopping in October.  We decided to make that trip AFTER I already had met my budget for the month, and certainly would have done some re-arranging if I had known we’d end up doing this.

But regardless of my grocery budget, we’re working against a business deadline and can’t NOT make sure the package is awesome, right?  And even if it is a business expense, we’re still eating the food.

Do you see my dilemma?

So I’m throwing it all out on the table, and hoping that you guys can extend a little bit of grace.

And I’m also throwing out there that this might happen again for November and December’s accountability posts too, since we’ll likely double and triple check to make sure the meal planning package meets ultimate awesomeness standards.  Hopefully though, we’ll find common ground between our own groceries and experimental groceries at some point in time, and the totals won’t be so high, lol.

I mean, that trip put a lot of food in our house… and we’ve got to eat what we buy.  So in theory, there shouldn’t be many “own groceries” trips, right?

At least I hope that’s how it works out.  My brain is kinda having a hard time wrapping itself around how to mesh business with personal, and it’s sorta kinda in “wing it” mode.

By the way, anyone want to come over for dinner?  I’ve got food to feed an army and there’s a standing invite until January, lol. 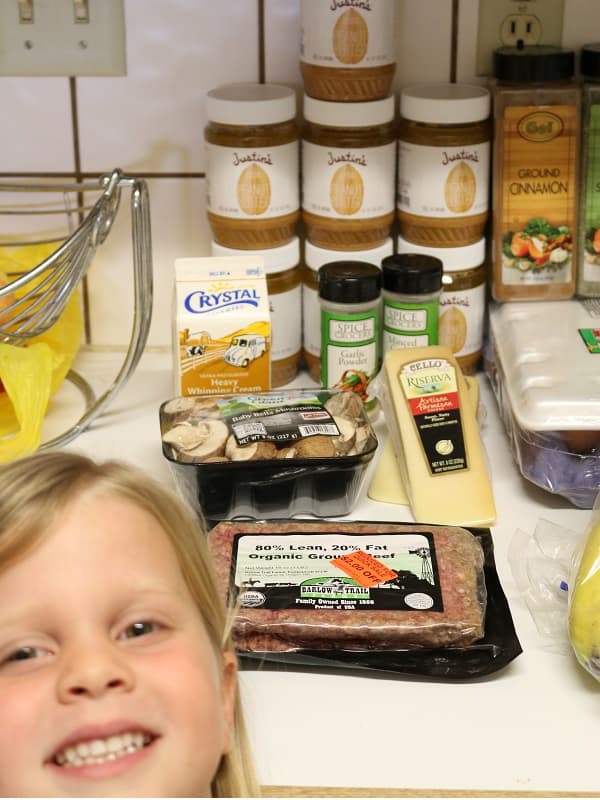 Yes, you read that right – 7 jars of peanut butter!!  It was nearing its expiration date and was greatly reduced.  Peanut butter was already on my list, but I had planned on buying it at Costco since that’s where it’s most affordable in my area.  I did the math and calculated a) that per ounce, this deal was better than Costco (12¢ compared to 14¢), and b) how many jars to buy so that I would essentially be paying the same as I would if I had gone to Costco.  The answer to the second part is 5 1/5… so I rounded to 6 and bought one more for good luck. 😉

I used the heavy cream to experiment with a homemade pumpkin pie spiced coffee creamer recipe (which didn’t work) and the spices were to replace what was empty in the cabinet.  Except the second minced onion.  That was an accident and was supposed to be garlic.  Oops.

Parmesan, mushrooms and spinach/kale blend for risotto and bananas for snacking.  Eggs are a staple, the organic ground beef was marked down (originally $5.99) and I’ll use this in our homemade spaghetti sauce when I find ground pork on sale.

Finally, bath tissue for the bathrooms.  Not pictured, but I promise I bought it. 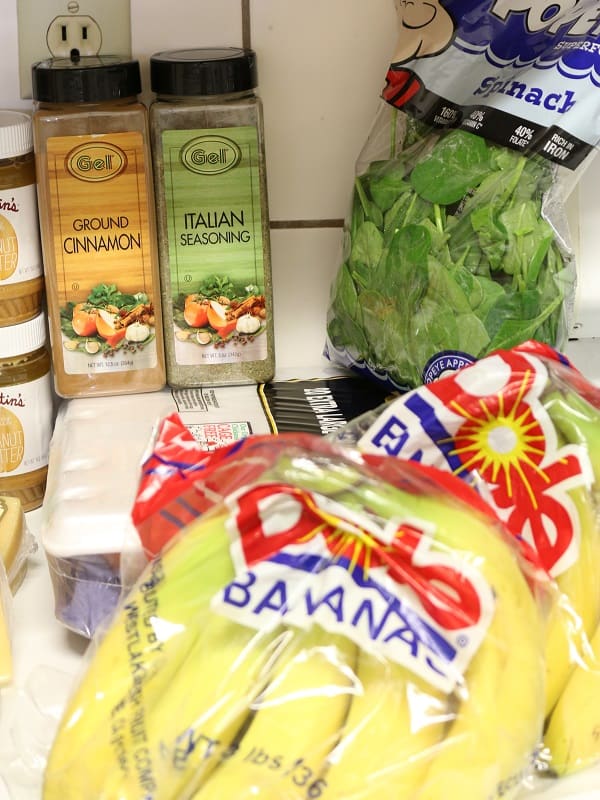 Safeway is a bit out of the way for me, but I happened to be in the area and had just a few bucks left on a gift card.  I swung in for broccoli crowns and paid zero out of pocket, leaving me with $1.48 left on the gift card.  Never know when that will come in handy!

Just one gallon of organic whole milk here.  We use this mostly for coffee creamer, but some baking too lately as I’m testing some recipes for Thanksgiving. 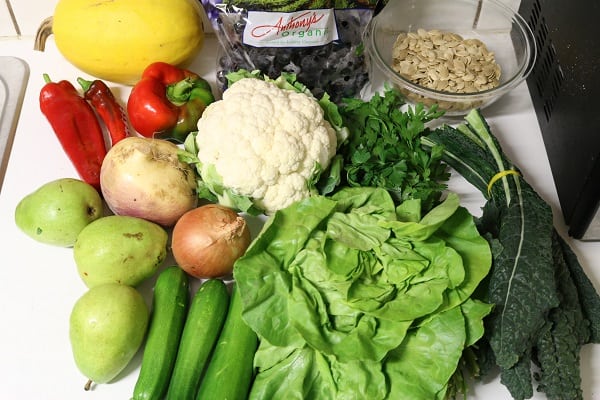 So far we’ve roasted half the cauliflower and still have the other half in the fridge.  The lettuce was used in salads and the kale is still in the fridge (about to be blanched, actually).  Parsley became pesto, onion to our stash and spaghetti sauce was serve with a simple tomato sauce in lieu of pasta earlier this week. 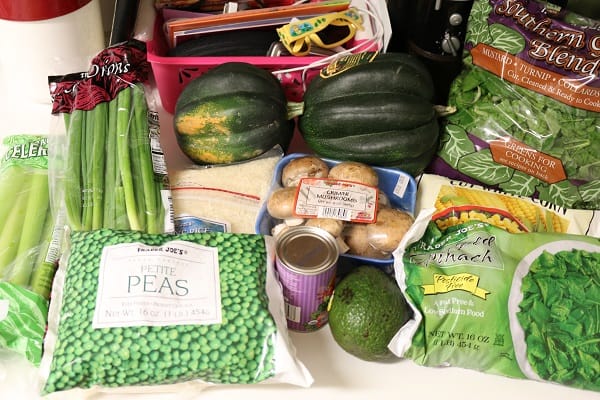 There are several items on this list that I wouldn’t ordinarily buy, like the sourdough, Cliff bars and fryer thighs.  My mother-in-law came in town to help with the kids while I went to Allume, so this trip included a few “fun” items to help her out.  I felt blessed enough with her visit, and wanted to make it as easy as possible when it came to cooking.  The sourdough was for sandwiches, Cliff bars for snacks and fryer thighs for her famous fried chicken (that I knew Mr. Crumbs would be requesting).  The clementines were also for easy snacks, despite the not-great-price.

Coffee, greens, bananas, butter, vanilla extract and mozzarella are staples.  I bought these apples because Mr. Crumbs has a very strange oral allergy to the local apples.  These are reserved only for him, while the apples we get from our CSA box are for everyone else.

Sorry there’s no picture for that one.  It was just one, of a million other things, that had to get done in just a few short hours before my trip! 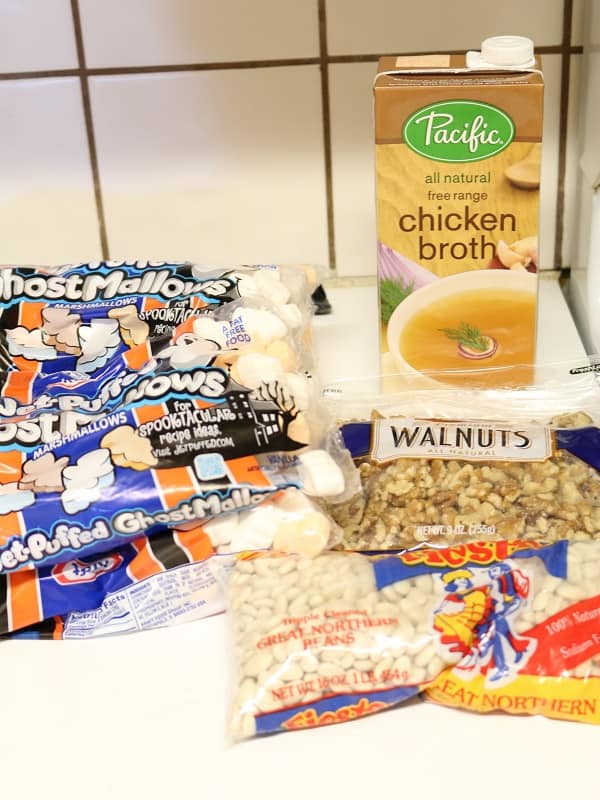 This was just a couple days before Halloween and instead of buying candy for Trunk-or-Treat, I bought marshmallows and made Cheerio treat bars (like rice krispy treats, but with cherrios).  There was a big box of Cheerios leftover from my MIL’s visit, and this was the best way I could think of putting them to use (since we don’t typically eat cereal).  Despite being held together with sugar, I still felt these treats were better than any other packaged sweet.  And definitely more affordable too.

Walnuts for recipes (like this autumn rice pilaf and a walnut parsley pesto) and great northern beans to test out my mom’s ham & beans recipe that will be posted soon.

I ordinarily make my own stock, but I had ran out the week before and didn’t have time to make more with the trip to Allume.  I bought one quart, and have a full batch in the slow-cooker right now! 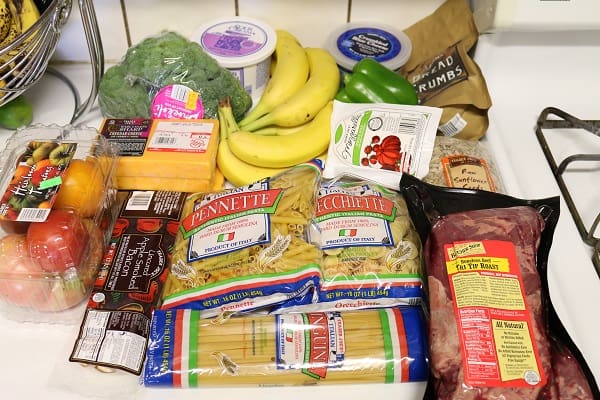 I was desperately avoiding another trip to Costco, but Mr. Crumbs was just as desperate to have his favorite beverage, sparkling water with limes.  I bought him a liter to hold him over.

We have a friend who is struggling with severe morning sickness, so I bought some disposable pans to put meals in and take over.  This way she doesn’t have to deal with washing dishes and returning them to their owners.

Mozzarella for pizza, cottage cheese for another experimental recipe, and milk for coffee and cooking.

We just picked up this box yesterday, so much of it is still left untouched.  However, I washed all the greens and stored them with a paper towel for salads.  I’ll likely roast the turnips with potatoes one night and add the mushrooms to a slow-cooker beef & broccoli dish for company next week.  The kids and I will eat the apples, and the farm gave me a recipe for winter squash lasagne that I plan on turning into a winter squash pasta bake instead.  We’ll see.  I know I’ve got other produce that will go bad before these squash do. 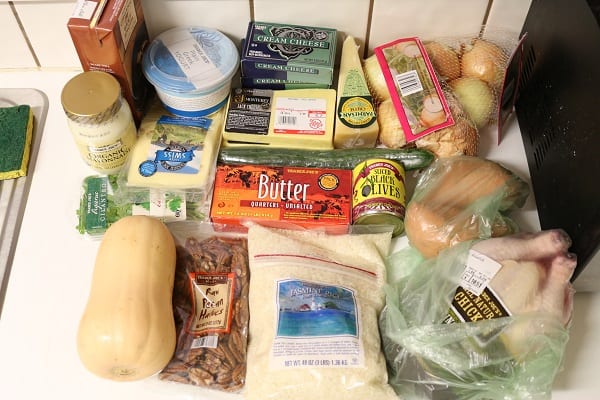 I wish I could tell you what we’re doing with all this food, but I’m really just following as much of the November meal plan as possible.  I’ll shred all the cheese and freeze it so that it doesn’t go bad on me, but we’re eating it in the order of importance (i.e. fresh first, then frozen).  We’re also using it to bless my friend who’s struggling with morning sickness, and hosting company at least once.  The CSA box has taught me how to put up foods (since we can’t quite eat it all in time), so I’ll be doing some of that here soon.

As I mentioned at the top of this post, we’ve got plenty of food on hand for the next several weeks.  We’re doing our best to either eat it or preserve it, and to shop as little as possible.  Fortunately, the experimental shopping list consisted of things we eat anyway like cheese and produce, or things that don’t HAVE to get eaten right away like pasta, rice and frozen veggies.  There were just a few condiments, but I’ve already got a plan for them anyway (i.e. ranch dressing and making more yogurt).

These grocery budget accountability posts are as much for me as they are for you.  When I know I have to share my shopping trips, I’m a lot less inclined to splurge or buy junk – thank you for holding me accountable every month!

I’d like to return the favor:  How’s your grocery budget coming along this month?  You don’t have to share with me if you don’t want to, but if you’re looking to save money on food, having accountability is key! 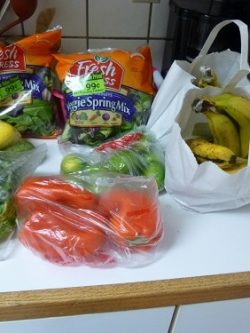