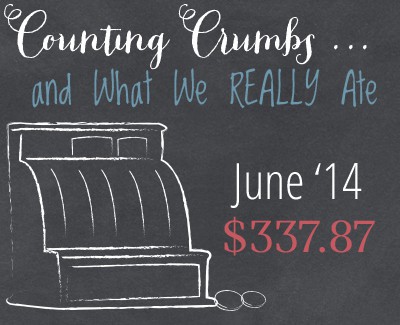 My grocery budget is $330 each month for a family of four – two adults and two kids.
This real food budget includes food, toiletries, household items as well as health & beauty products.
Today marks the end of June 2014.

My budget accountability for this month is slightly out of whack.  Normally, we would eat from this meal plan and at the end of the month, I share what we really ate along with our shopping receipts.

However during this summer, we’re working on a few different projects that require us to somewhat fly by the seat of our pants.  I’m also not keeping very good track of what we ate (sorry!) since I’m only meal planning for 2-3 days at a time, and it’s based heavily on what we already have in the kitchen and what we’re in the mood for.

AND that means a bunch of little trips for just a few things.

However, I AM still keeping my receipts – projects or not – since we’re eating the food and it’s coming out of our own pocket.  So then, I present to you our grocery spending for the past four weeks:

One Sunday after dinner, my dad gave us some sliced roast beef and dinner rolls that they weren’t going to be able to eat before they would go bad.  I picked up beef stock, used an onion from the pantry and made French dip sandwiches!  Served with baked potato fries.

The cucumber was a splurge and I honestly thought I’d use it… and then I didn’t.  We ended up throwing half of it away.  Serves me right for veering from the shopping list! 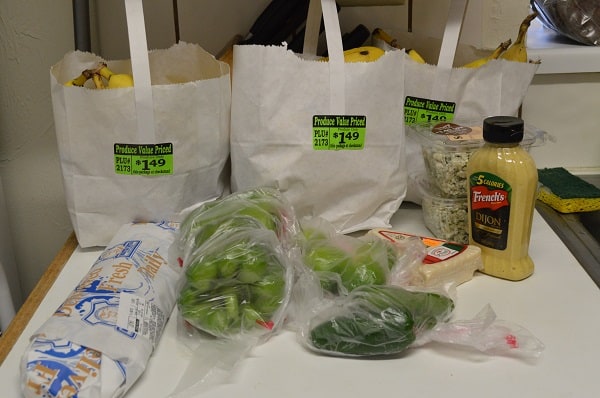 The mustard is for some recipe testing I’m doing. 😉  Bell peppers for grilled sandwiches, limes for flavoring water and taco night and the jalapenos were for a pico de gallo recipe I wanted to make, except that I forgot to buy fresh tomatoes and didn’t realize I forgot until just before dinner.  Oops!

Bananas for snacking and smoothies, wild cod because it was a great price!  Just $3.99 per pound for wild fish, and we’re trying to eat more wild fish in general.  Now is a great time to do it though, since it’s prime fishing season and in-season fish is more affordable than out-of-season fish.

Eggs are a staple and pineapple was on sale (anything less than $2 for a whole fresh pineapple is a must-buy in my book).  The rest of the ingredients were mostly for recipe testing, but we enjoyed a few in smoothies and over salads as well.

Mr. Crumbs made a last-minute request for mini-cheesecakes, so I made them along with a homemade cherry puree with the cheap cherries we bought earlier.  Pepperoni for pizza night and yes, more eggs!  I’m making an effort to feed the kids more eggs since at 25¢ each, they’re an incredibly affordable source of protein.  We’re enjoying them scrambled, fried, mixed in with oatmeal (based off this recipe) and in oatmeal bakes.

Whole milk for making yogurt and coffee, cilantro for tacos. 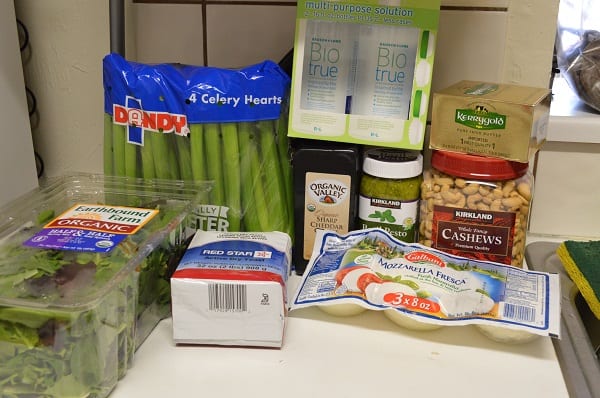 Contact solution always goes in the cart when it’s on sale.  Yeast for baking bread, yogurt for making my own whole milk yogurt.  When I shared this frugal list of healthy food at Costco, a reader suggested I try the Kirkland brand Greek yogurt – so I did!  I made my own yogurt using most of one 32oz container, then froze the other so I can make more yogurt next month (without buying more starter).  Actually, it might last longer than that… I made one gallon of yogurt in a slow cooker, then strained it to get homemade Greek yogurt and whey.  The yogurt is for smoothies, and the whey is for soaked whole grain bread.  With thick yogurt already in the fridge, I might not have to use the tub in the freezer.  I guess we’ll see!

Celery, kale, carrots are our staple veggies that most recipes we make call for.  They’re also for snacking and smoothies.  I chose to buy uncooked flour tortillas instead of going homemade this month because our schedules are SUPER packed this summer with the projects we’re working on.  The last time I bought them, half of them got moldy in the fridge after just a few weeks.  So this time I’m keeping them in the freezer.  They’re cooking up just fine (in case you were wondering), but you do need to allow about 20-30 minutes for them to thaw enough to be able to pull off just one tortilla from the stack.

Spring lettuce mix for salads, fresh mozzarella for pizza, butter because we’re butter hogs (and we cook with it too).  Whole chickens for meals.  One note on the cheddar cheese – remember the post on 8 ways to save money on cheese?  One reader suggested there to to buy sharp cheddar instead of medium cheddar, since the stronger flavor means not using as much.  You know what, they were right!  It’s $1 more for sharp cheddar, but it’s the end of the month and we still have a few ounces left on the brick.  Every other month we’re lucky to make it to week 3 and still have some left!

I’ve been trying my hand at homemade lotion, but Mr. Crumbs wasn’t liking my concoctions.  I went ahead and bought him his favorite brand, and I’m using up the various homemade versions until I’m brave enough to give it another go.

We plowed through the first bottle of dijon mustard, and Mr. Crumbs has been eating it with big, sourdough pretzels leftover from our camping trip… but I wasn’t done testing, lol.  More bananas for snacking, smoothies and muffins.

This stop was for one purpose:  cherries.  They were just 99¢ per pound! 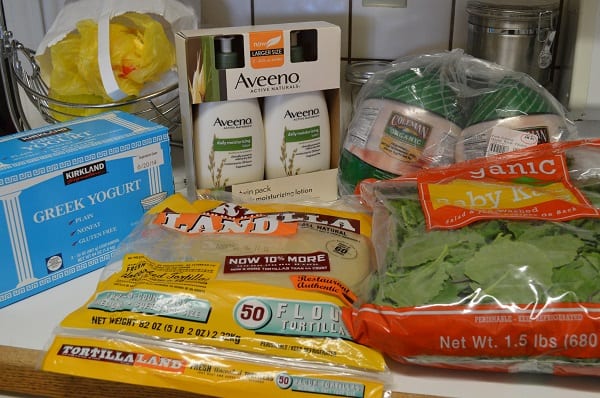 Organic apples seem to be long gone, so these are the most affordable of what’s left.  The last batch of oranges we bought from Costco (this trip) were moldy after just a week or so, so I took those back and got another box.  The $1 is the difference in price between the two.

We’ve hired two girls from our church to be my mother’s helpers this summer as I’m working feverishly on these projects.  As such, having plans in place for meals and snacks is REALLY important so that I stay within budget and there’s plenty of food to go around.  The sweetened condensed milk was for granola bars, where I used up the last of the dried cherries in the fridge, plus coconut flakes and sunflower seeds.  One batch will last at least 4 weeks too, so they’ll last us quite a while when paired with fresh produce.

Sweet corn because it’s SO good, and SO cheap!  It’s below my buy price, and there’s already a bunch cut & measured in my freezer just waiting for a recipe!!

Looking back at the prices now, I’m seeing that both kale and apples are cheaper than they were at the start of the month.. and the apples by $1.50!!  A reader left a comment quite some time ago that prices are generally more expensive at the start of the month, and then cheaper mid-month… Hmmm… I think I might start testing this to see if it holds true.  Can you imagine how much we’d save if everything was 50¢ – $1 cheaper?!

Just a lone gallon of milk here.  We use milk as a coffee creamer, and for making kefir.  Sometimes for biscuits too, but not for drinking.  Just in case you were wondering. 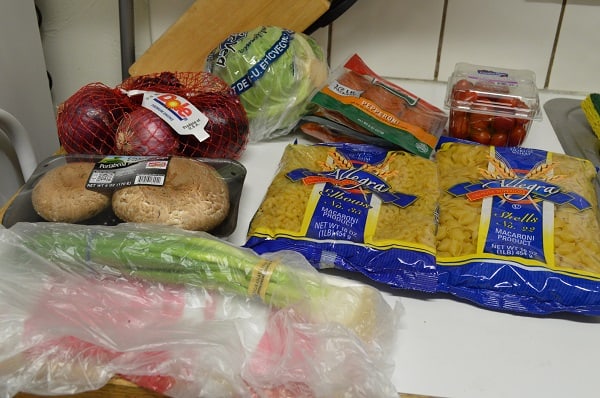 Bath tissue is self explanatory (right?), macaroni and shells for minestrone soup and Italian pasta salad for later in the month.  Green and red onions were mainly for garnish, but I subbed them into other recipes requiring onions too, like this salad that we used the cabbage in.

Mushrooms were for grilled sandwiches, tomatoes for snacking and recipe testing and pepperoni for the best pizza ever.  Ok, so I’m a little biased. 😉

Another quick stop for peppers and onions, mostly for dinners.  There wasn’t a specific plan in place for these, but having them on hand makes planning dinners really easy.  Stir-fry, roasts, tacos, fajitas, salads… just add protein and you’re good!

More fresh sweet corn since it was the last day of the sale. 😉

We’re down to the last 5 coffee filters and my son has been eating tomatoes like there’s no tomorrow!  Seriously, he asks for a tomato for a snack… plus cilantro for a version of this Mexican veggie dish.

Finally!  Closer to our actual budget of $330.  Still a bit over, but I’m okay with that right now.  Mr. Crumbs is going out of town for a few weeks, so the kids and I will be eating as much of the random foods as we can.  For example, there’s still salami in the freezer from last month’s pepperoni taste test (which I plan to use some of it in an Italian pasta dish), one quart of leftover tomato soup and another quart of vegetable and barley soup.  Plus a steak, chicken, cod and all sorts of other FOOD in the house that needs to get eaten, lol.  I’m hoping that we’ll be able to spend minimally these next couple weeks, especially since our garden is starting to produce zucchini!!

How’s your grocery accountability coming this month?  Did you come in under budget?  Go over? 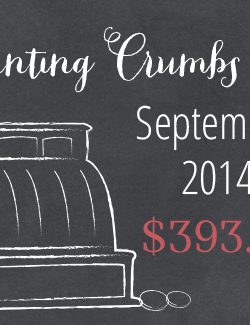 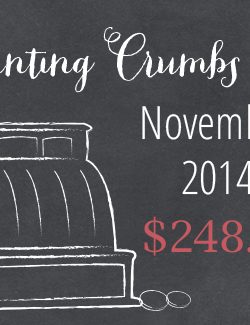