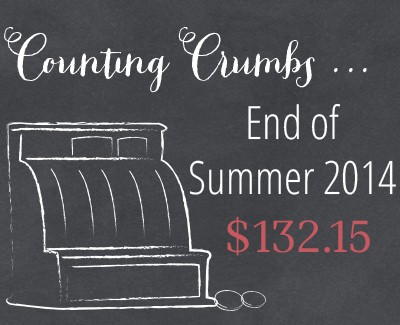 My grocery budget is $330 each month for a family of four – two adults and two kids.
This real food budget includes food, toiletries, household items as well as health & beauty products.
This post is our budget accountability sessions, where we share what we spent and how we spent it.
Today marks the “End of Summer” 2014.  You can read previous Counting Crumbs reports HERE.

I’m calling this edition of Counting Crumbs “End of Summer” since we tally our receipts every four weeks, but most months are longer than 28 days.  This will get us on track again next month, so that September spending stays true to September!

Something to consider in this budget accountability session is that the first two weeks fell into our 30 day no spending challenge.  Yes, we really didn’t spend any money for 30 days!  You can go back and read about what started the challenge HERE, plus day 10 update, day 20 update and the final day 30 update.  Leave a comment in any of those posts if you have any questions, or to update the Crumbs community on your own challenge!

I tried hard to keep shopping to a minimum this month, but there’s always something to share.  Let’s spill the beans!

This purchase was literally the first day after our 30-day no spending challenge.  We were invited to a Labor Day block party, and asked to bring chips and dip.  We had onions and plenty of garden tomatoes at home, so I volunteered pico de gallo and bought cilantro, limes and peppers.

Only one bag of chips was eaten at the party, so we brought the second bag home for snacking.  We still have one lime and two peppers left as well.

The bananas were marked down, and a huge welcome from the kids since they’ve been restricted on fruit intake lately.  They’ve been eating them non-stop since, and it’s very nice to be able to offer such a frugal treat for them! 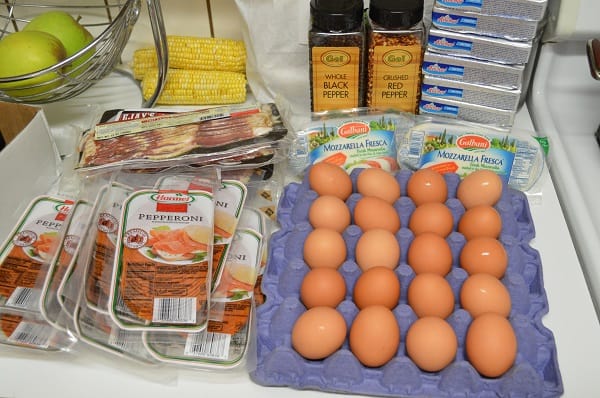 Later in the week, after thinking more about how to proceed with shopping after the challenge (not wanting to splurge and go all crazy and stuff), I decided to shop at Grocery Outlet instead of Costco just to see if I could save a few pennies (and not spend $100 off the bat).

Everything you see above was on my shopping list, but what you don’t see are a few items I decided NOT to purchase because we weren’t completely out yet.

That’s one lesson I learned and plan on implementing going forward:  Don’t buy something just because we’re running low, UNLESS that item is vital to proper kitchen function.

Example #1:   Cinnamon.  Vital?  No.  We’ve been down to the last tablespoon or so for three weeks and we’re doing just fine.

Example #2:  Onions.  Vital?  Yes.  Many of our meals use onions, and they provide SO much flavor.  These make it on the list when we’re down to 2.  Then, I have sufficient time to pick up some before the last one is gone.

Another lesson I learned is to stockpile for only one month, with the exception of grains.  That’s why you don’t see a dozen more packages of butter or bacon on the list.  I stopped at just 8 butters (that’s 4lbs for the month) and 4 bacons (for Saturday mornings and BLT’s later in the month).

Pepperoni for one month (9oz each week) and fresh mozzarella for one month (2lbs, 8oz for each pizza night).  Crushed red pepper because we have been out for WEEKS, and it just tastes SO GOOD on pizza.  Whole peppercorns to replenish our grinder.  Pepper is another vital ingredient in the kitchen.  As is salt.  But I refilled our salt dispenser with the box of Kosher salt, so we’re good there for awhile.

The good news is that we used less pepperoni than I had planned for, so we’ll have some overage for next month.  Plus we’re going on vacation later this month, so some of the other staples will carry over too.

There was just one gallon left of whole milk, so I bought that to make yogurt (using leftover yogurt from this purchase as the starter) and we’re using the 2% milk for coffee and kefir.

By the way, I nearly killed my kefir grains since we didn’t have enough milk to continuously feed them.  I’m nursing them back to health now, slowly, and so far so good!  They’re pretty resilient little guys! 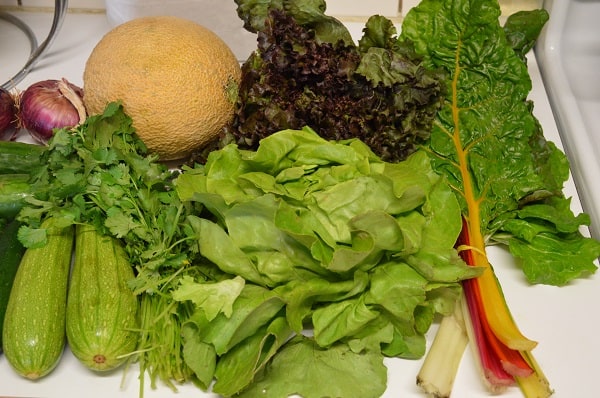 Note:  That picture above isn’t from this box; it’s from the next one.  Yes – two pictures worth of food in just one box!

We liked the CSA box so much this summer, that Mr. Crumbs insisted on signing up for the rest of the season.

We’ve already eaten some of it, and have plans for some, so I’ll share both with you.

We made two salads with the lettuce, blanching the greens and freezing for later.  Steamed broccoli for dinner, roasting beets for smoothies.  Celery for snacking, stir-fry and salads and basil for a caprese salad we took to a pot-luck.  Carrot greens for smoothies, carrots for stir-fry and carrot bread.  Garlic for cooking (adding to our stash instead of buying more), cucumbers for salads and soon-to-be pickles.  Cherry tomatoes for the aforementioned caprese salad, heirloom tomatoes became pizza sauce and we’re snacking on the apples. 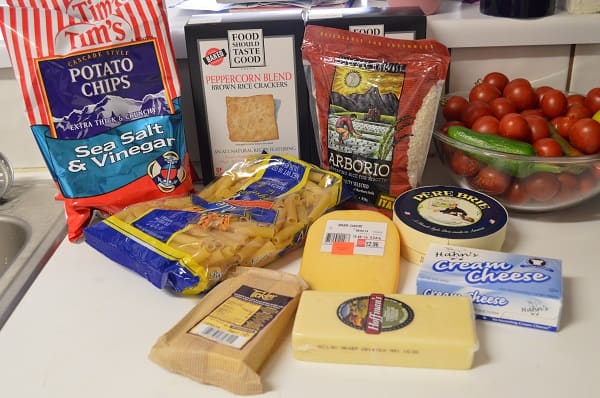 Mr. Crumbs officially made it to the point of no return and put in his request for snacks.  Specifically, items #1-3 above.  He also request Parmesan cheese, but there wasn’t any.  I subbed brie and picked up some crackers too, since I know he’ll like those.  Arborio rice for some risotto later this month, plus cream cheese and pasta for a last minute dinner that we’re hosting for a friend. 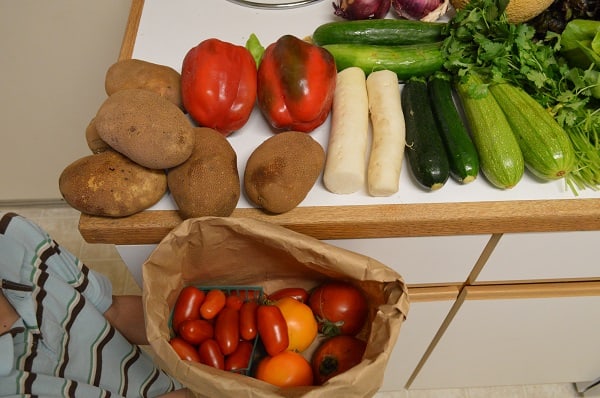 The two lettuces were immediately washed, chopped, dried and put in the fridge for future salads (bear in mind we just got this box YESTERDAY).  Chard was blanched with the collard greens, one onion and potatoes were put in the garage with existing items.

The cantaloupe will no doubt be cut up for snacks.  The mini-roma tomatoes and were halved and roasted with one red onion for dinner last night (new recipe hopefully coming soon!).  Will likely make grilled sandwiches this week for the heirloom tomatoes.  Not sure about the bell peppers yet, but we can always slice and freeze if we don’t eat it before we leave.

Daikon might go into a salad, or eaten raw if it’s not too strong.  Zucchini will get shredded and frozen for zucchini bread later in the year.

Our monthly budget is $330, but the first two weeks of this cycle was included in our no-spending challenge.

As an after-thought, I considered only allowing ourselves the difference between our budget ($330) and what we tallied for August ($213.94) as our budget for this cycle, but that was AFTER I had gone shopping, lol.

Going forward, I need to be very mindful of how much our CSA box will cost each week and take $87.40 right off the top so I don’t even get tempted to overspend.  I’m also being VERY cautious about what we actually by, considering substitutions and changing meals in order to use up what we already have instead of spending more.

Also, with vacation coming up, it will be extra important to eat what we have so that food doesn’t go to waste while we’re gone.  That means freezing/preserving when possible, and eating leftovers even if they don’t look appealing, lol.

These grocery budget accountability posts are as much for me as they are for you.  When I know I have to share my shopping trips, I’m a lot less inclined to splurge or buy junk – thank you for holding me accountable every month!

I’d like to return the favor:  How’s your grocery budget coming along this month?  You don’t have to share with me if you don’t want to, but if you’re looking to save money on food, having accountability is key!

« DIY: Homemade Face Wash
25 Food Substitutions That Will Save You Money »