My grocery budget is $330 each month, including food, household items and toiletries. Each week I crunch the numbers to see where I stand. Today marks the end of the month.  You can read about the halfway point here, where I spent the first $279.49 of my budget.

After spending nearly 85% of my budget within the first half of the month, I did my best these past two weeks to stay out of the stores as much as possible.  Obviously I did some shopping (or this would be a very boring Counting Crumbs report), but it was SIGNIFICANTLY less than last time.  And the totals were a lot less, but that’s slightly counterproductive… a lower trip total makes you think you have more wiggle room, which backfires because that “I’ve got room” thinking makes you buy more a couple days later, and then more at the end of the week… and those little totals add up to an ever bigger total, and the next thing you know you’ve gone over budget.

Instead I kept telling myself I didn’t have any money left.  That was a lie, but just barely.  Mr. Crumbs even asked me Wednesday if I could pick up more sparkling waters.  I told him I wasn’t doing any grocery shopping until Friday when the budget reset.  That was truth.  Leaving only $50 for a family of four to eat for two weeks is not best practice.  Forbidding myself to shop was punishment.

Is staying within a grocery budget a mind game?  Sometimes, absolutely yes! 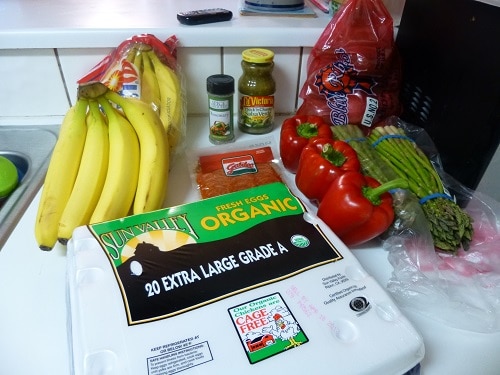 I wasn’t kidding when I said we’d eaten at least five pounds of asparagus this month!  I couldn’t resist the price tag – gobbling it up while we can!

While at Grocery Outlet, I picked up a few staples: bananas, potatoes, dried rosemary and eggs.  The bell peppers were for pizza and a salsa bar we had with taco night.  Salsa verde for tortilla soup and the salsa bar too and pepperoni for pizza night. 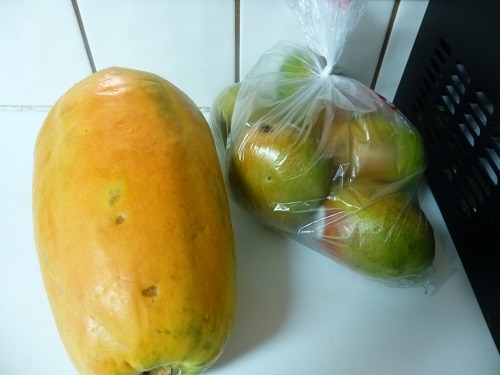 The lowest price I’ve seen for mangos is 33¢ each, but The Boy loves them so much that I couldn’t help but treat him for $1.  Plus I wanted to make mango salsa for taco night.  When I see them for that crazy low price again, I’ll be buying TONS, chopping and freezing for smoothies.  Mangos in smoothies is my all-time favorite!

The papaya should have rang up for less, but I wasn’t in the mood to argue in the self check-out line (getting The Girl to just.not.touch. the silver bagging shelf lest the computer things I’m stealing food is hard enough).  We aren’t big fans of this fruit raw, so we’ve been putting it in our daily smoothies.  It’s lasted well over 10 days cut up in the fridge and made LOTS of drinks.  I can’t say that for all the fruit we buy (one mango can be devoured within minutes).  In the end, it was $3 well spent. 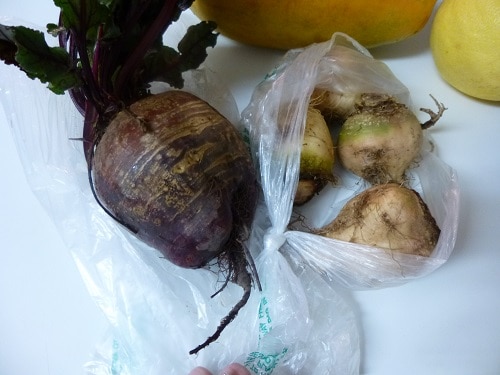 I’m still getting my bearings at the farmers market, slowly transitioning from store-bought produce to the local organically grown variety.  The only produce on my shopping list that was a cause to buy organic were strawberries – I knew the mangos and papaya were on the safer end.  The growers wanted $10 for three pints and considering that was a HUGE chunk of what I had left to spend, I got beets instead.

I know – beets ≠ strawberries, but I love beets and they were cheap.  Plus the white ones had a ladybug keeping them company.  Watching The Boy carry around the ladybug like it was a pet was sweet enough. 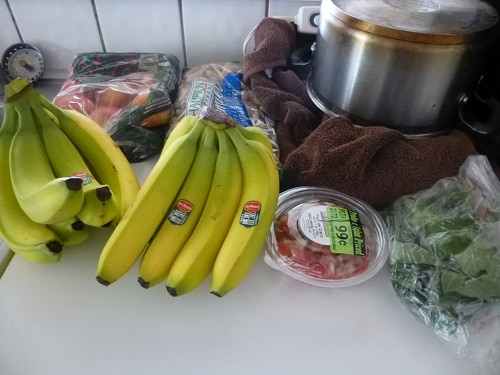 Yogurt and milk for homemade yogurt, organic apples (out of season I know, because the market gave their “last week” notice two months ago) and bananas for snacking and smoothies.  Basil for pizza and tomato basil soup.  The pico was marked down and I thought it would be fun to add it to the table for taco night.

Members of the Crumbs house are suckers for tortilla chips.  Collectively, if we had a weakness, it would be cheese, tortilla chips and salsa (all separately though, because we’re not huge fans of nachos…).  Taco night just isn’t possible without any of those three.

I’ll admit – I didn’t read the label.  I’m sure there’s some bad stuff, but the good in our diet far outweighs the bad (and I’m making the decision, not them).  Next time I’ll get a big bag from Costco.  Definitely more cost effective, plus I think there are fewer (and “cleaner”) ingredients on that bag.

I did bring my own bag to carry these home though.  Brownie points for the green effort?

These last two Savemart trips were both the day of taco night – so much for planning ahead, eh?  I bought broccoli because I thought it would be nice to have a vegetable with dinner… but we ended up saving it for the night we had grilled steak sandwiches instead.  Can’t have tacos without cilantro either.  Im.poss.eeble.

Over budget by 39¢?  I think I can rummage through the sofa to cover that. 😉

So far we’re on the right track this year.  I am finding that most of the budget is spent in the first half of each month, which I’m not quite sure how I feel about.  I understand that things need to be replenished (and by the time the budget resets, they REALLY need to be replenished), but if I can somehow hold off on spending some of that until the second half, then the ability to stock up on a sale or to upgrade more produce to organic goes up…. the latter being important especially with Spring arriving.  I’d love to be able to buy extras and freeze or can for later in the year.  See, it’s all a mind game. 😉

How are you counting crumbs?