My grocery budget is $330 each month for a family of four – two adults and two kids.  This real food budget includes food, toiletries, household items as well as health & beauty products.

Can you believe it’s been six weeks since I last shared my shopping trips with you guys?!  What’s even crazier is that I’ve been looking forward to this post all week!

Just meal planning will get a slight upgrade for 2013, so has Counting Crumbs.  I’ve decided to share my shopping experiences with you guys every other week to coincide with the bi-weekly menu plans.

Essentially you’ll see what I bought on Friday, then specifically how everything is used the following Monday.  There will inevitably be some overlap (especially when the husband requests another batch of soup instead of the planned meal), but you guys are smart and I know you can keep up. 😉

I apologize in advance for the lack of pictures.  I started taking pictures diligently at the beginning of the year, only to remember after the fact that they weren’t needed yet.  Then I forgot to START taking pictures when they were needed!

So a few of the pictures are accurate, but I also used a couple from last month’s trip that included many of the same items.  I figured you guys wouldn’t mind since more pictures is a good thing. 🙂 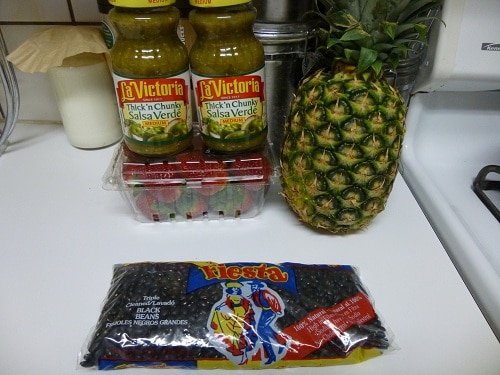 When I first started paying better attention to prices, I didn’t care about brands.  Then the importance of the quality of food came closer in focus I started paying attention to brands again.  I hope to discuss this in detail a little later on, but I’m including the brands when available so you guys can either jump on the wagon with me, or tell me the brand isn’t great quality after all!

While Mr. Crumbs suggested cutting back on our pepperoni back in December, he quickly followed it up with “unless we could get those really big slices, like a deli would have.”  After searching high and low and coming up empty handed, Grocery Outlet had those humongous slices for only 99¢ each!  This was one of the first trips of the month and two weeks later, we still have three packages in the fridge.  In fact, I should probably go freeze those…

The trip included various produce for soups and stir-frys, sausage and beef for spaghetti sauce, salsa for soup, cheddar for meals and stocking the freezer, eggs and beans are pantry staples and peanut butter because Costco hasn’t had the Adams Natural brand for a few months now. 🙁

Which on a similar note, my go-to source for Kerrygold butter (also Costco) is not going to have any until November.

The hard work of finding grass-fed, deliciously yellow butter that doesn’t cost me my first born child begins again.  Until it’s found, I picked up two 8oz packages of butter from England.  I hadn’t heard of the brand, but I figured if Ireland’s cows ate grass, maybe England’s cows did too?  Turns out I was right so this is the new back-up plan until I can find Kerrygold at an affordable price again.

Fresh mozzarella for pizza, canned tomatoes and rice for pantry staples, produce and cheese for snacking and meals, tomato sauce also for the spaghetti sauce.

Last month I went through the effort of using coupons and finding a deal on diced tomatoes at Target.  Then we went to Costco and found them for nearly the same price.  This month I skipped a step and went to Costco first. 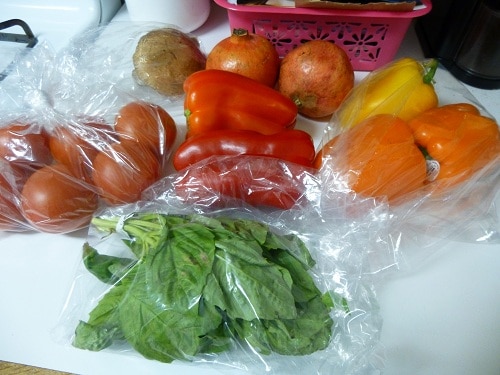 This trip is from a market that deals with excess from the local fields.  Much of this produce is not organic, so we don’t frequent the market that often.  This day we happened to have lunch at a nearby restaurant and stopped in to pick up what was needed for the next few meals.

The kids and I found this market a couple week’s ago and it is VERY nice.  It showcases many of the local farms in our area, 90% of the farmers are organic and the deals are fair.  This particular trip was for organic apples to make a batch of vanilla maple apple pear butter (we had finished off the first batch of strawberry apple).  I canned it using the flip-upside-down canning method a reader mentioned and so far so good!  Oh, and the butter is AMAZING!

Savemart had an excellent selection of marked down items this week.  Harris Ranch is a California-based company that raises cattle and processes grass-fed beef.  The beef are finished on local grown feed and corn without any animal proteins and pesticides.  With the options I have available at the moment, this is as close to pure grass-fed as I’m going to get.  There is the availability of organic beef, but I’m not exactly where I stand on the organic vs. grass-fed argument with cattle, especially since we truly don’t eat beef all that often.  Long story short, I picked up a flank steak that should be excellent in a couple stir-fry type dishes.

A couple small cups of shredded Parmesan were marked down, making the per pound price nearly half of the regular price (plus someone else did the shredding work!).

Notice the UNbleached bread flour?  Yep, we finished off the massive bags in the pantry and are moving on to greener, unbleached pastures!  I’m o-kay paying $3 for 5lbs for now, but I do have my eyes open for a better deal in the long run. 😉 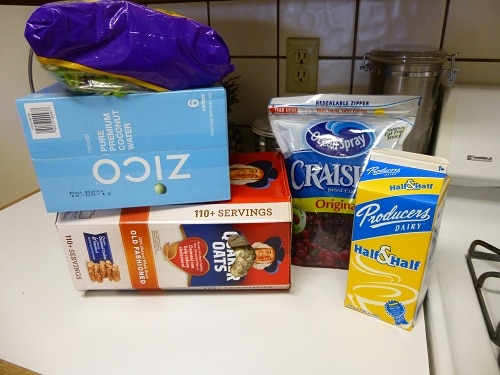 Grocery Outlet was lacking in the coconut water department as well, but they happen to be on sale this month at Costco so all is well.  Old fashioned oats for the pantry, half & half for coffee and organic celery for snacks and meals.  The craisins are also on sale, so don’t be surprised if you see another bag (or two) at the end of the month tally. 😉

This is the “new to me” Mexican store I had been referring to during the Fresh Start series.  Mr. Crumbs passionately LOVES their tacos, so he picked up a bag of beans for me during his weekly lunch outing.

This was also a Mr. Crumbs trip, but I don’t have the receipt.  UPDATE:  The total was estimated $4 less than what our bank statement says, so I’ve updated this little bit.  I don’t remember what else was on his, hence the question marks!  This should be all that was on his list (based on my master shopping list), but I’ll add to it later if the receipt turns up.  One wedge of parmesan, and a whole chicken that was slaughtered in the Crumbs kitchen, frozen and the remnants became 6 quarts of chicken broth!  Woo – hoo!

This trip also officially marks the use of whole wheat flour!  I’ve finally finished off the bread flour and all-purpose flour that I previously bought at Costco, so I’m slowly adding whole wheat to some of our standard bread recipes.  In other exciting news, it’s not bleached!  Yeah!

This trip was mostly paid for with reward dollars, which has been the goal with the reduced use of coupons.  Razors and feminine products were needed.  The pumpkin was on the shopping list for these amazing pumpkin-pie-ish smoothies, so I picked up a can on CVS’s dime. 😉

I’ve spent roughly 60% of my budget so far this month, but this is fairly typical.  Next will need more fresh produce and at least one more gallon of milk for yogurt.  One thing that has been HUGE in keeping our budget in check is soup night.  Most soups we make cost less than $4 to make the entire pot (both minestrone and tortilla included), and one big pot makes roughly 6 quarts of soup (which is the equivalent of dinner for four and lunches for two… maybe more if you add a salad or sandwich on the side).  Plus it’s SO good, and good for you!

What about you?  Find any good deals on good food this week? 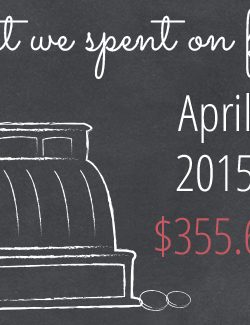 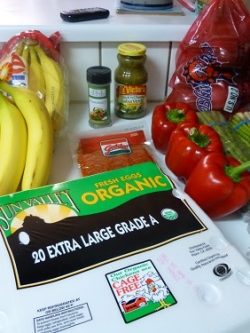 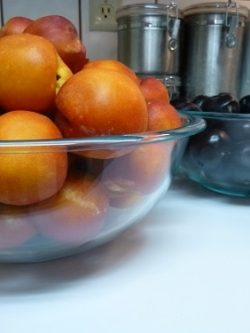